Terry Schilling, President of American Principles Project, joined "In Focus with Addison Smith" to discuss a Washington school board director, JENN MASON, who is offering to teach a class to 9-year-olds on "sexual anatomy for pleasure" and "safer sex practices for all kinds of sexual activities", at her sex shop.

A Bellingham, Washington State, school board director is under fire after trying to host a “queer youth open mic” event for children ages 0-18 at a sex shop, prompting news headlines and an outcry nationwide. The June 2 event ended up being hosted at a fringe “church” instead.

One America News has repeatedly been targeted by Democrats in Washington and by Big Tech giants online, but now the radical left is taking its censorship of OAN to new levels. One America's Pearson Sharp reports. 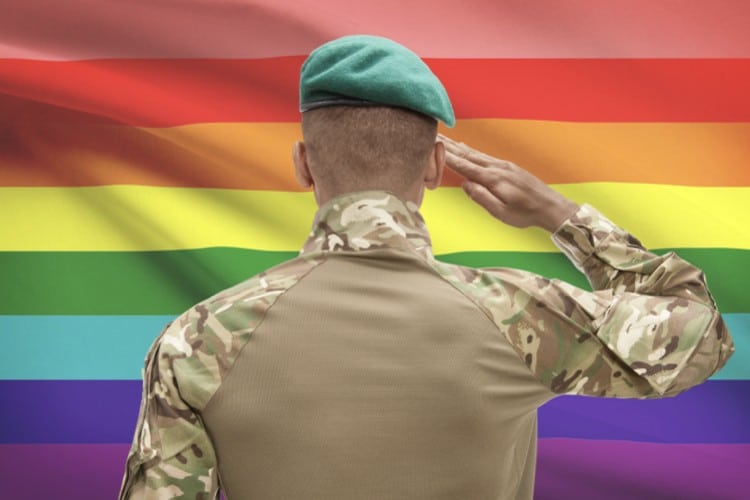 The policy applies whether or not the “transgenders” have undergone “sex reassignment” surgery.

The latest from Tranny Joe’s cross-dressing circus comports with The New American’s earlier report on his “transgender service policy,” which is really a brainwashing program to convince American military personnel they can believe six contradictory things before breakfast.

The “transgender service policy,” as TNA reported in March, is explained in vignettes that show GIs how to react if they cross the trail of a mentally ill comrade who thinks he’s a woman.

The vignette uncovered by Breitbart, curiously, doesn’t deal with men showering with women, but instead with a woman showering with men. Perhaps the Army doesn’t want women to think it’s setting them up to be raped.

“The training slide offers a ‘vignette’ instructing soldiers on what to do if they encounter a female soldier who identifies as male according to the Department of Defense’s personnel tracking system known as Defense Enrollment Eligibility Reporting System (DEERS), but has not surgically transitioned and still has ‘female genitalia,” Breitbart reported.

The slide is titled “Soldier/Unit Training Barracks, Bathrooms, and Showers”:

Vignette: Following his transition from female to male (which did not include sex reassignment surgery) and gender marker change in DEERS, a transgender Soldier begins using male barracks, bathroom, and shower facilities. Because he did not undergo a surgical change, the Soldier still has female genitalia. …

“Soldiers must accept living and working conditions that are often austere, primitive, and characterized by little or no privacy. … Understand anyone may encounter individuals in barracks, bathrooms, or shower facilities with physical characteristics of the opposite sex despite having the same gender marker in DEERS.”

As well, “transgender Soldiers are not required or expected to modify or adjust their behavior based on the fact that they do not ‘match’ other Soldiers,” Breitbart reported.

And the sane military personnel who don’t go along: They’ll be disciplined.

Biden opened the military to sex deviants and the mentally-ill “transgenders” five days after he took office, and the “trangender service policy” was published shortly thereafter.

The “vignettes” surfaced in March.

The so-called vignettes, which explain how to handle transgender personnel, are meant to brainwash normal military personnel.

“Soldier who was assigned male at birth says he identifies as a female,” one such vignette begins:

Soldier lives as a female in his off-duty hours. He has no medical diagnosis, does not plan to seek medical treatment, and does not experience significant distress relating to his gender identity. Soldier is not requesting to be treated as a female while on duty.

Aside from treating the soldier with “dignity and respect,” military personnel must pretend he needs a new “gender identity,” not a discharge and psychiatric treatment:

If Soldier later requests to be identified as a female during duty hours and/or experiences increased distress relating to his gender identity, inform Soldier of the Army’s transgender policy and recommend that he see a military medical provider. Gender transition in the Army begins when a Soldier receives a diagnosis from a military medical provider indicating that gender transition is medically necessary.

Strangely, these vignettes used standard pronouns, not the myriad ridiculous words that “transgenders” have adopted to confuse anyone speaking to them.

Biden and his daft underlings have been waging war on decency and normality since before he took office when he picked a man who thinks he’s a woman to oversee the Defense Department’s transition.

After he took the oath, Biden picked a man who thinks he’s a woman as his No. 2 health official.

And in his latest assault on the sensibilities of normal Americans, he picked a sex deviant and child prostitution apologist to run the Energy Department nuclear waste disposal bureau. 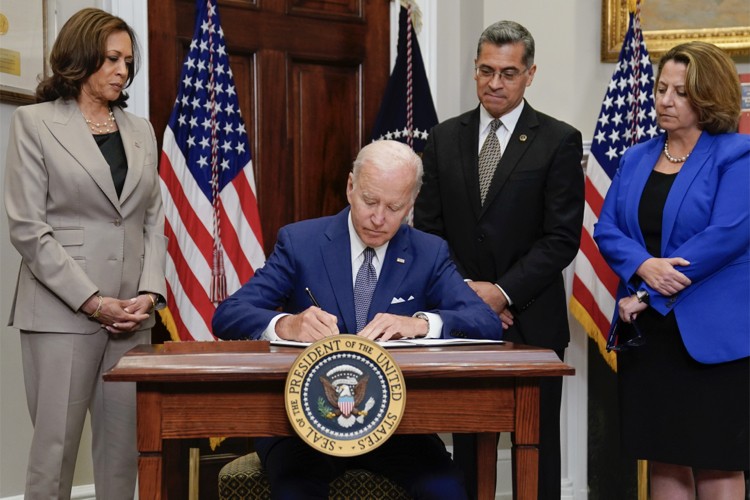 In answer to the U.S. Supreme Court’s ruling that removed federal protections for abortion, President Joe Biden has issued a limp-wristed yet costly rebuttal in his latest executive order. The document purports to protect “access to reproductive health care services” — a.k.a infanticide — despite the fact that Biden already admitted, “No executive action from the president can do that,” in his remarks following the SCOTUS decision to overturn Roe v Wade.

“Let me be very clear and unambiguous,” he read from the teleprompter that day. “The only way we can secure a woman’s right to choose and the balance that existed is for Congress to restore the protections of Roe v Wade as federal law.”

Too late. Senate Republicans already blocked an attempt by House Democrats to pass legislation enshrining the murder of the unborn. It was a replay of the similar routing of their deceitfully-named Women’s Health Protection Act in February.

Biden has obviously forgotten about those defeats, along with his party’s dismal prospects, when he points to the upcoming mid-terms as an antidote. “This fall, Roe is on the ballot,” he slurred in June. In remarks delivered after signing Friday’s order, he repeated the appeal with the rallying cry: “Vote, vote, vote, vote.” His confusion manifested further as he called the Supreme Court “out of control” and began reading teleprompter instructions out loud in the middle of his speech.

Despite his bewilderment, the reality of today’s political climate casts a “shameless pandering” hue on today’s executive order. Even leftists admit it has no teeth. The Associated Press quoted Georgetown University law professor Lawrence Gostin, who described the order as “underwhelming” and said, “There’s nothing that I saw that would affect the lives of ordinary poor women living in red states.”

Regardless, it will certainly impact taxpayers who will be footing the bill for each measure Biden has concocted. His executive order is packed with the same baseless, hyperbolic accusations that Attorney General Merrick Garland pitched in his June 24 statement complaining about the SCOTUS ruling. “Women who reside in states that have banned access to comprehensive reproductive care must remain free to seek that care in states where it is legal,” he wrote as if SCOTUS had closed all state borders. Further suggesting that the nation’s high bench had also bound and gagged the masses, he added that “individuals must remain free to inform and counsel each other about the reproductive care that is available in other states.”

Similar exaggerations and insinuations appear throughout today’s executive order and are used as excuses for the administration to commandeer tax dollars for its murderous agenda. Here are some highlights:

• The Department of Health and Human Services (HHS) will be expanding access to “medication abortion,” otherwise known as Mifepristone or the “abortion pill.” According to American Life League, it starves an unborn baby to death and causes a woman to abort spontaneously. The abortion pill is banned in several states since the SCOTUS ruling but is still widely available, even through mail order. Aren’t pharmaceutical companies, courtesy of Uncle Sam, already fleecing the American taxpayer enough without using baby-killing as yet another pretext?

• That’s not the only waste of taxpayer dollars the president is ordering. He also directs HHS to expand access to contraception. Why? The recent SCOTUS ruling does nothing to limit that.

• The agency is also supposed to uphold federal law to ensure pregnant women have “access to the full rights and protections for emergency medical care afforded under law,” (they don’t already have that?) and to beef up federal encroachments on healthcare under the guise of protecting patient privacy (as if HIPAA weren’t already bad enough). Moreover, HHS will be launching abortion “access” advertising campaigns (without a word about life-enhancing abstinence programs or adoption alternatives).

• Biden gratuitously assumes a “heightened risk” to those “seeking and providing” abortions — risk from bloodthirsty pro-life activists, no doubt — and in disturbingly vague language pledges to “ensure” and “protect” their safety. The administration will additionally offer “volunteer” legal assistance to help patients and providers circumvent state restrictions. Who will foot these additional bills? The American taxpayer, of course.

Underscoring each of these measures, the president’s executive order also establishes an interagency task force made up of the HHS, the attorney general, and the White House Gender Policy Council. Biden set up the latter in March of 2021 so bureaucrats could hire more bureaucrats to “face the current crisis” of “gender inequality” in the “United States and globally.” Again, your tax dollars at work!

Nothing in Biden’s executive order is authorized by the Constitution, yet he sanctimoniously defends himself, claiming that SCOTUS eliminated a woman’s so-called constitutional “right to choose” to kill her unborn offspring. The White House declares that restricting access to what leftists Orwellingly refer to as “reproductive health care” will deny “fundamental rights — to privacy, autonomy, freedom, and equality.” The president did not attempt to reconcile his administration’s self-righteous indignation with its federal mandates for Covid vaccines.