GOP MORMON CANDIDATE FOR U.S. SENATE MAY ALLOW FOR ABORTIONS?

BUT NOT NECESSARILY "PRO-LIFE" AS PER MORMON RULES

"Race, religion, ethnicity, gender, sexual orientation, and other factors should not limit opportunities or access to education, employment, housing, and healthcare."

The infamously antisemitic US Presbyterian Church (PCUSA) has gone further than ever in its provocation against the State of Israel. At its 225th General Assembly, it voted to declare Israel as an apartheid state and created Nakba Remembrance Day. The PCUSA casts no judgments on the Palestinian Authority’s Pay-For-Slay program, or with the original charters of the major Palestinian organizations, all of which call for the obliteration of Israel.

The PCUSA has an unsavory history of smearing Israel and actively supporting Palestinian jihadists. Back in February, the Stated Clerk of the PCUSA characterized the so-called “‘occupation’ of Palestinian lands by Israel as ’21st century slavery.‘” In 2014, Shurat Hadin (the Israel Law Center) filed charges against the PCUSA for having ties to Hizballah. According to the law center, the PCUSA “breached its tax-exempt status as a religious organization by violating of the United States tax code through its unlawful political lobbying and contact with Hezbollah, a US-designated terrorist organization.” That same year, the Jerusalem Post reported on a Presbyterian study guide that advocated for the annihilation of Israel and encouraged Holocaust denial. The PCUSA should be held accountable as an accessory to terrorism.

Beyond the Jew-hatred and devoted support of the Palestinians, the Presbyterian Church presented “Christians who support Israel as dangerous and a threat to Middle East peace.” Not the Iranian regime, but Zionist Christians.

The committee also “passed a resolution directing Church leadership bodies to designate May 15 as ‘Palestinian Nakba Remembrance Day.’” Nakba Day for Palestinians means the “day of catastrophe” when Israel was born in 1948. The hate, violence, and rage against Jews began long before Israel declared statehood — a fact that the Presbyterian Church chooses to ignore.

Christian propagandists are useful idiots in service of the Palestinian cause of jihad. The flames of antisemitism have fully engulfed the Presbyterian Church.

The US Presbyterian Church voted to declare Israel an apartheid state and establish a Nakba Remembrance Day, as well as passing two other resolutions highly critical of Israel on Tuesday at the American religious body’s 225th General Assembly.

“Israel’s laws, policies and practices regarding the Palestinian people fulfill the international legal definition of apartheid.”

US Presbyterian Church 2022 Resolution
“Israeli Apartheid” compared to Holocaust
The US Presbyterian Church’s International Engagement committee voted overwhelmingly to recognize that “Israel’s laws, policies and practices regarding the Palestinian people fulfill the international legal definition of apartheid,” as they had determined that Palestinians were systematically oppressed through inhuman acts for the objective of racial domination.

The resolution claimed that there were two sets of laws for Israelis and Palestinians, which are preferential for the former and oppressive to the latter. It also asserted that Palestinian land and water were stolen for use by “Jewish-only settlements” and that Palestinians were denied freedom of residence and movement, living in “separate reserves and ghettos,” echoing language used in the resolution passed on the same subject at the North Carolina Democratic Party (NCDP) state convention on June 18.

The church claimed that Non-Jewish Arabs living in Israel and the disputed territories have “an inferior status” and Palestinians are unable to participate in the “political, social, economic and cultural life of their country.”

“This overture is pursued with the hope it will lead to a peaceful reconciliation for the people of Israel and Palestine similar to that which occurred in South Africa when apartheid was internationally acknowledged,” the resolution explained as the rationale behind the vote.

“Christians spoke out in the 1950s against segregation in the United States and later against apartheid in South Africa. They must again raise their voices and condemn Israel’s discrimination against Palestinians and give a name to the crime against humanity that this discrimination represents, the crime of apartheid,” it said…. 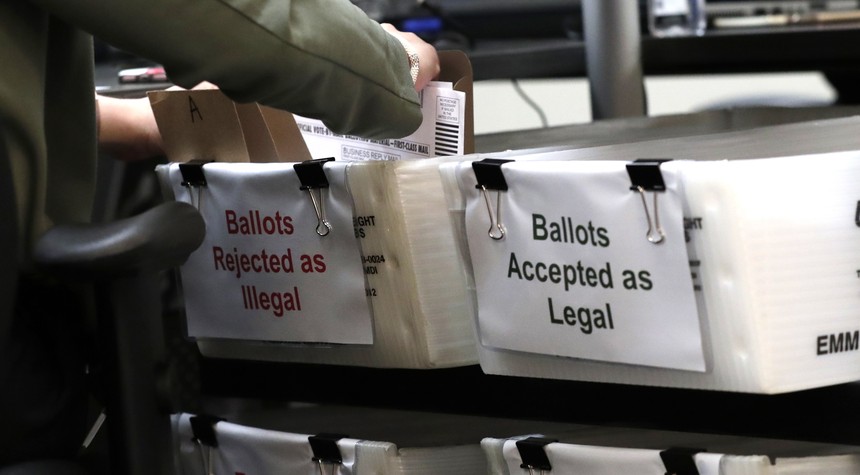 The story begins with a series of freedom of information act requests aimed at a number of states to see if any election officials are tempted to apply for now-illegal money from the Mark Zuckerberg-funded Center for Technology and Civic Life. Such grants and the wild expenditures of these funds altered the course of the 2020 election. (Read The Real Kraken, What Really Happened to Donald Trump in the 2020 Election at PJ Media.)

The FOIAs were submitted by the Public Interest Legal Foundation—with which I am associated—and were aimed broadly at election officials across the United States.

While no election official in a state that now prohibits private funding of elections has applied for new funding, something stranger, and more dangerous has emerged from the public information requests.

In one email, we find that the Democracy Fund—a hyper-funded progressive money source—is organizing state officials and third parties to discuss election administration.

Participants in this Democracy Fund effort include:

John Keller, a criminal prosecutor at the United States Department of Justice Public Integrity Section who has gone after Republicans like Maricopa County Sherriff Joe Arpaio

Matt Masterson, a former staffer for John Boehner and now “Director of Information Integrity” at Microsoft and leading their “Democracy Forward” team

Craig Latimer, the Hillsborough Florida Supervisor of Elections who told us that his office refuses to make any election crimes referrals to county prosecutors

Andrea Abbate of the ZuckBucks Mother Ship, the Center for Technology and Civic Life

Lindsay Capodilupo, the “Election Crimes Coordinator” at the FBI

Tasmin Swanson formerly of the GOTV Baltimore Votes and Peace Corp volunteer in China, but now with the Soros-funded Center for Civic Design, a progressive group dedicated to infiltrating election offices with graphic design “help.”

No conservative or right-of-center groups are invited.

Since Trump’s 2016 victory, this fluid consortium has built structures that match powerful funding—with fringe ideological activists, with government offices—in an effort to create a narrative that nothing was ever wrong with American elections. These structures also reorient the administration of elections in ways that benefit progressives, such as wide use of automatic mail voting.

Extraordinary efforts were made in 2020 to claim mail voting was problem-free despite the evidence and despite elections in New Jersey being overturned because of mail ballot fraud.

Note the invitations were sent to criminal prosecutors at both the FBI and Department of Justice.

If there was no voter fraud, as Brennan Center hacks claim, then why were the prosecutors invited to the party?

The Democracy Fund isn’t the only group creating a synergy with the leftists, government agencies, and state and local election officials, and our FOIA sweep is capturing a trove of documents showing more angles of progressive influence over election administration.

David Becker’s Center for Election Innovation & Research has emerged as the sidekick to the Electronic Research and Information Center (ERIC), a consortium of state election officials who use data exchanges with ERIC to clean voter rolls and register the unregistered to vote. (Read Care About Election Integrity, Let Me Introduce You to ERIC).

David Becker has emerged as the party planner for the strange mix of federal prosecutors, progressive activists, election officials, and ex-pats from the federal swamp who now work for corporate America.

Becker, the former California Bear drum major—including when the Cal band played Dixie—also matches progressive dollars, state and local election officials, and federal authorities at the United States Election Assistance Commission who have controlled the distribution of hundreds of millions of taxpayer dollars.

These federal dollars move through the EAC and end up in states. How they are used, and which officials and vendors get them, is a top priority for the Center for Election Innovation and Research.

One such confab occurred in May of 2019 in Denver, according to documents obtained in the Public Interest Legal Foundation’s FOIA.

They also watched the Colorado Rockies beat the Arizona Diamondbacks 11-10.  Becker played concierge for all the fun according to the emails obtained through public records requests:

“May 30 Baseball Game: For those attending the ballgame (there are 22 of us!) we’ll be meeting in the lobby of the Hotel Born to walk over to the ballpark…. If you cannot make it by 12:15 let me know and I’ll arrange to leave your ticket at will call. Your rooms will likely not be ready by that time, but you should be able to store your luggage.”

After the game? Becker had that covered:

“I’m guessing there will be a group of us going out. If you are not coming to the game and want to join us, please text me and we’ll make sure to include you.”

The next day, May 31, Becker’s state election official confab shifted to work:

The emails do not reveal what the previous “as usual” other dining experiences were.  Nor do they reveal who paid for the lodging at the Hotel Born,  with rates that routinely top $450 a night.

The emails do, however, reveal the agenda for the day:

“For those of you familiar with the meetings I’ve facilitated for ERIC, this will be similar. The general topic is centered around the structure of states’ voter registration databases, and the voter data within. We will spend most of the time at this meeting (which I expect will be the first of several) discussing the following: Voter Registration Databases, Structure, Interconnectivity With Other Databases Such as DMV…. Compatibility With Eric, Batch vs Real Time, Security and Privacy of Data.”

Again, no conservative election administration groups or conservatives were invited to the Colorado confab.

Some of the participants at the Colorado confab were from states that opposed President Trump’s Presidential Advisory Commission on Election Integrity (on which I served) and refused to provide that commission information about the same database details they happily shared with David Becker’s progressive organization.

All of this is just a first taste at understanding the behind-the-curtain relationships developing between progressive deep pockets, leftist activists, vote fraud deniers, federal officials with prosecutorial power, and state and local election officials.

This effort started after the 2016 election, and notably focused on many of the bluish swing states that Donald Trump won in 2016 but lost in 2020. Whether that was the plan or just a side benefit of the Denver confab and Democracy Fund plans remains to be seen.