Over 50 Attacks on Pro-Life Groups Since May, Not One Arrest 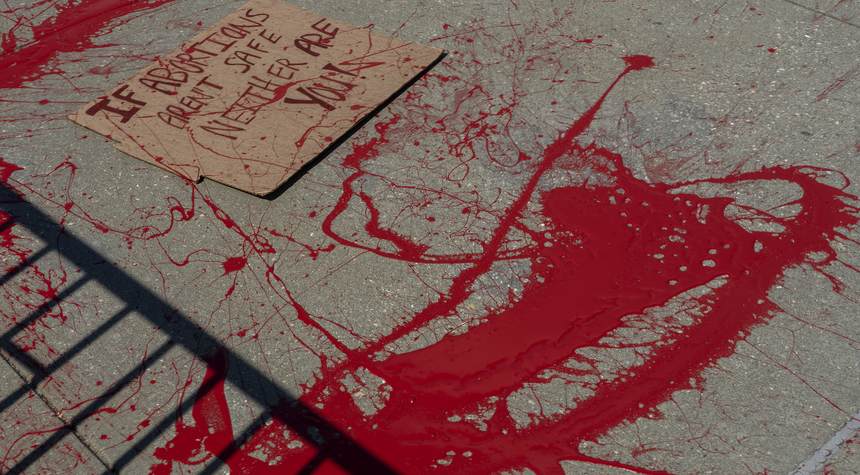 The latest beneficiaries of the Biden regime’s two-tier legal system are the pro-abortion fanatics who have attacked over 50 pro-life centers since May 8, shortly after the draft Supreme Court ruling overturning Roe v. Wade was leaked. While Biden’s handlers are doing everything they can to circumvent the Court’s decision and keep the sacrifices to Moloch going everywhere, Old Joe’s desperately corrupt and politicized Justice Department has not managed to arrest a single person in connection with these attacks. What a surprise.

On May 15, the Women’s March declared: “Our Summer of Rage is officially beginning. We’re prepared to rage for Roe all summer, culminating in a Women’s Convention in Houston, Texas. We won’t rest until abortion rights are protected.” So far, the summer has seen plenty of rage: Catholic Vote reported that as of Friday, “More than 50 pregnancy resource centers and offices of pro-life groups have been attacked and vandalized,” and “Pro-abortion domestic terrorists have claimed responsibility — and are promising more attacks.”

Epoch Times reported Friday that “attacks by pro-abortion groups have left a trail of smashed windows, graffitied walls, and firebombed buildings from Alaska to Florida. Some pro-life groups have been attacked multiple times.” In Longmont, Colo.,, pro-abortion zealots set fire to Life Choices Pregnancy Center. Life Choices director Kathy Roberts said, “We’ve pretty much lost everything but our ultrasound machines.” Nor is the danger to the center now a thing of the past: “There is some concern. We were actually threatened again by phone. And there are groups that want to pursue continuing to harass different centers.”

Life Choices staff wrote on the center’s webpage, “We are devastated and stunned by this frightening act of vandalism. Life Choices has served Longmont and its surrounding communities for over 37 years. Our dedicated staff – including staff nurses and volunteers – works hard to provide hope, help, and support for the women, men, and families of our community.”

The National Institute of Family and Life Advocates (NIFLA), which says that it “exists to protect life-affirming pregnancy centers that empower abortion-vulnerable women and families to choose life for their unborn children,” said that it was not aware of any arrests in connection with any of these attacks, even for simple vandalism. NIFLA’s vice president of legal affairs, Anne O’Connor, did, however, offer one hopeful bit of information: “While we are unaware of any arrests related to these incidents, we know that in some cases, the FBI is investigating potential hate crimes and violations of the FACE Act [Freedom of Access to Clinic Entrances Act]. In others, the U.S. Department of Homeland Security has been brought in to help.”

This was noteworthy, as the FACE Act is a piece of Clinton-era legislation designed to protect abortion centers. Ironically, now pro-life centers could be benefiting from it. Accordingly, O’Connor added, “Although violent acts against life-affirming pregnancy centers and medical clinics are on the rise, we appreciate the efforts of local and national law enforcement to maintain order and safety in our communities.”

Nonetheless, it’s clear that Biden’s Justice Department, which took the highly unusual step of openly dissenting from the decision overturning Roe and has been decidedly reluctant to protect conservative Supreme Court Justices from illegal protests at their homes, is hardly making the protection of pro-life centers a high priority. No one has been arrested from the pro-abortion group Jane’s Revenge, despite its open threats to pro-lifers. “We will hunt you down and make your lives a living hell,” the group has said. This is, it says, a “war” against pro-lifers.

“We cannot ever let a bully on the block stop us from doing a good work,” says Kathy Roberts. While that is laudable, it is unconscionable that the Justice Department has not moved against those who are targeting pro-life centers all over the nation. Once again, as with the intimidation of the Supreme Court Justices who voted to overturn Roe, Biden’s regime has shown that it just isn’t interested in protecting dissenters from threats and violence. Biden’s handlers know that the establishment media will ignore property damage and, if anyone actually gets killed, will absolve them of all responsibility. So for them, there is just no downside to perpetuating the legal double standard.