Pelosi Gets Religion, Uses It in Naked Attempt to Manipulate Conservatives

Nancy Pelosi, The Pro-abortion in chief, meets the Pope October, 2021

US Speaker of the House Nancy Pelosi SHAMELESS and HYPOCRITICAL dares to meet with Pope Francis, in the midst of a nationwide debate over the legality and morality of abortion laws. 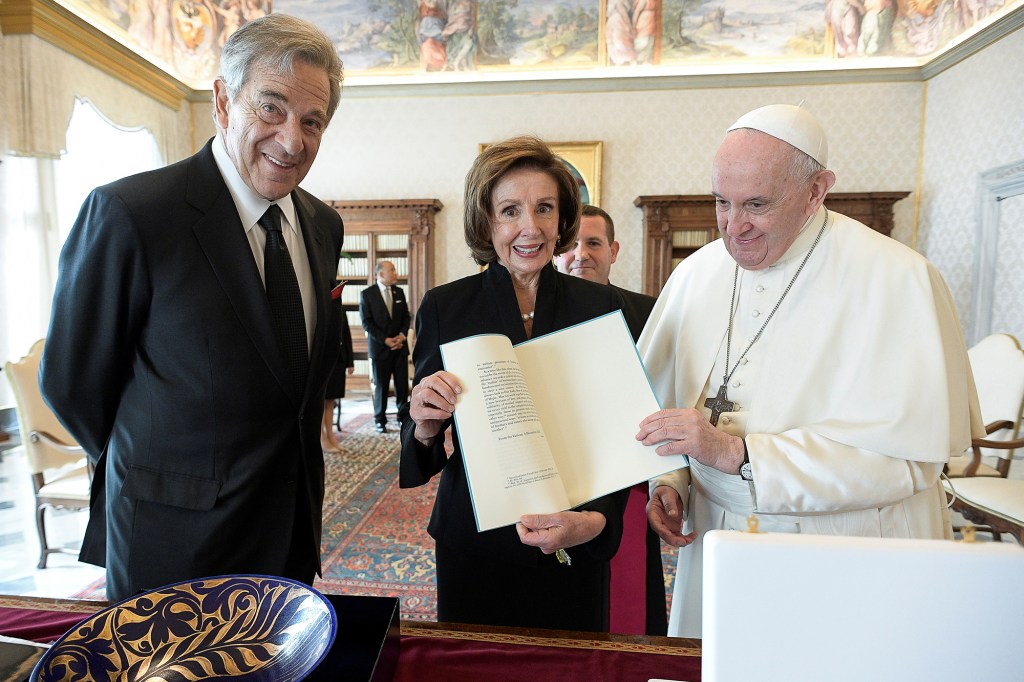 THE UNITED STATES OF POPE FRANCIS

Dr. Taylor Marshall observes that all three branches of the USA will not be held by a single Protestant: they are dominated by “Catholics” in the shape of Pope Francis’s global agenda. House Speaker Nancy Pelosi (D-Tito’s Handmade) is ostensibly a Catholic, but she doesn’t exactly wear her religion on her sleeve. Her most famous connection with her Church is her public rejection of its teaching on life issues, and her determination to protect and strengthen the “right” to commit what the ecclesiastical authorities she claims to respect say is murder. But Pelosi doesn’t hesitate to invoke her religion when it seems useful to her to do so, that is, when she thinks it can help her advance her far-Left agenda. On Tuesday, she pulled out the Gospel of Matthew to justify sending $40 billion to Ukraine during a time of steeply rising inflation, astronomical gas prices, and a baby-formula shortage.

Speaking on the House floor about the aid package for Ukraine, the superannuated hypocrite said, “So when you’re home thinking, ‘What is this all about?,’ just think about ‘When I was hungry, you fed me,’ in the Gospel of Matthew.” It was bitterly ironic to see a woman who has strenuously insisted for years that her religion had no place in her politics suddenly invoking the words of Jesus to justify her preferred public policy, but Leftist politicians have never shied away from even the most cynical and manipulative grandstanding. She clearly intended to co-opt opposition to the Ukraine aid package by portraying it as un-Christian, hoping to intimidate Christian conservatives into thinking that if they opposed it, they would be going against the very words of the Gospel itself.

Pelosi: "When you're home thinking about [what $40 billion to Ukraine] is all about, just think about 'when I was hungry, you fed me' from the Gospel of Matthew." pic.twitter.com/J1NukSFVuo

Pelosi’s transparent ploy wasn’t working with at least one of those Christian conservatives. William Davis, whose Twitter bio says he is Catholic and conservative, responded trenchantly to Pelosi, “For I was a defense contractor, and you gave me even more taxpayer money.” Others pointed out that Pelosi had never sponsored a comparable payout for the hungry and homeless on the streets of her district in San Francisco.

Pelosi did, however, take recourse to the same rhetoric last October, when, during an event in San Francisco, she quoted to the city’s mayor, London Breed, the same passage in Matthew, again as she touted big-government socialist measures that have manifestly failed. “Madam Mayor, it’s always a joy to be with you while we’re talking about low-income housing, affordable housing, public housing, and the rest, and to hear you speak from your own personal experience about it. ‘When I was hungry, you fed me. When I was homeless, you gave me shelter. When I was naked, you clothed me,’” quoth Nancy. “All of those things in the Gospel of Matthew, the Mayor brings to the experience.”

Related: Pelosi: God Wants You to Shell Out for Climate Change

Pelosi has even situated her staunchly pro-abortion stance within the context of her alleged religious commitment. In September 2021, touting her pro-abortion bill that would circumvent the overturning of Roe v. Wade, Pelosi reminded us, “I come to this as a Catholic and a mother of five, in 6 years and 1 week, and the joy that all that meant to us.” Then in March 2022, arguing that Roe should be upheld, she said it again: “I am a devout Catholic … Mother of five children in six years and one week. This is a precedent of the court. It should be upheld by the court. This really gets me burned up, in case you didn’t notice, because, again, I’m very Catholic, devout, practicing, all of that.” All of that, yeah. Apparently, the idea was that if she, as a supposedly devout Catholic, so firmly supported Roe, then so should we all. But exactly how the connections actually go in Pelosi’s tangled mind is not always entirely clear.

Meanwhile, back in the real world, Rep. Marjorie Taylor Greene (R-Ga.) tweeted, “I voted NO to send $40 Billion American tax dollars to Ukraine. That bill does things we should not be doing. Americans are suffering from a baby formula crisis, a border crisis, skyrocketing inflation and fuel crisis, and they are fed up with America last politicians.” It’s refreshing to see that at least some politicians in Washington are not as self-serving, calculating, and disingenuous as Pelosi. But apparently not very many.

The money is going to Ukraine, with no regard for the crises here at home, and with the America-First president still vilified and ridiculed by the political and media elites even now that he has been well over a year out of the White House. Pelosi reminded us of the priorities that she and God, in that order, ought to have. It is us peasants’ job, as far as she is concerned, simply to fall in line.