Hannity: Kathy Barnette Hasn’t Been Vetted, She Was a Never-Trumper

MSNBC TRIES TO MALIGN KATHY BARNETTE AS TAKING PART IN THE JANUARY 6, CAPITOL RALLY WITH THE "PROUD BOYS":

So apparently Oz believes that it is or ought to be a condition for running for Senate in the state of Pennsylvania that one thinks Islam is just grand.

TRUMP MISJUDGED HIM, EVEN IF HE WAS PRESUMABLY VETTED 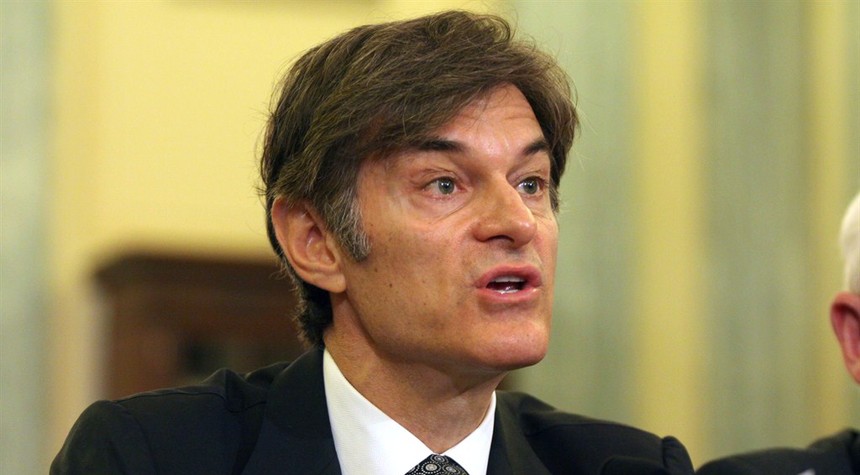 The freedom of speech is under attack everywhere, and it’s not clear which side Dr. Mehmet Oz, the Trump-endorsed candidate for a Senate seat from Pennsylvania, is on. We have the Disinformation Governance Board, the Jan. 6 Committee, ongoing claims that Trump supporters are all “white supremacists” (and “white supremacists” are the nation’s biggest terror threat), and rampaging social media censorship. In that environment, it’s crucial for all candidates, especially America-First candidates, to affirm their support for free speech. Instead, Oz has just called for his primary opponent to be barred from the race, not for any criminal activity or, say, dual citizenship in a hostile nation (Oz is a Turkish citizen), but for something she said in 2015.

Oz has already criticized his principal opponent, Kathy Barnette, for “Islamophobia,” a made-up word designed to inhibit criticism of jihad violence and Sharia oppression, and one that is in common usage among Leftists but rarer among patriots. On Saturday, however, Oz went even farther, charging that Barnette should actually be banned from running for the Senate, and presumably for anything else, because she doesn’t have a sufficiently positive view of Islam.

Oz’s demand raises some interesting questions. On the Left, criticizing Christianity is generally seen as “courageous,” even “heroic,” as can be seen in the enduring popularity of Richard Dawkins, Sam Harris, the late Christopher Hitchens, and the like. Criticizing Islam, on the other hand, is “hateful,” “bigoted,” and “racist” as far as Leftists are concerned. If Dawkins or Harris or some other critic of Christianity were to end up running for a Senate seat somewhere in the U.S., would Oz call for this candidate to be disqualified? Almost certainly not.

For criticizing Islam, however, Barnette has aroused Oz’s enduring ire. Apparently back in 2015 she tweeted “Pedophilia is a Cornerstone of Islam,” although she now claims that she “would never have said that.” That’s unfortunate, as she offered no explanation of how the remark appeared on her Twitter feed if she didn’t say it, and it demonstrates that she is allowing Oz to put her on the defensive and that she is unsure how to respond. She would be better off just owning the remark and defending it, as there is certainly ample justification in Islam for thinking this.

Turkey’s directorate of religious affairs (Diyanet) said in January 2018 that under Islamic law, girls as young as nine can marry. Ishaq Akintola, professor of Islamic Eschatology and Director of Muslim Rights Concern, Nigeria, said in 2016: “Islam has no age barrier in marriage and Muslims have no apology for those who refuse to accept this.” Dr. Abd Al-Hamid Al-‘Ubeidi, Iraqi expert on Islamic law, said in 2008: “There is no minimum marriage age for either men or women in Islamic law. The law in many countries permits girls to marry only from the age of 18. This is arbitrary legislation, not Islamic law.”

Dr. Salih bin Fawzan, prominent cleric and member of Saudi Arabia’s highest religious council, declared in 2014 that there is no minimum age for marriage in Islamic law at all and that girls can be married “even if they are in the cradle.” Pakistan’s Council of Islamic Ideology has ruled that “Islam does not forbid the marriage of young children.”

These authorities say these things because hadiths that Muslims consider authentic records state that Muhammad’s favorite wife, Aisha, was six when Muhammad wedded her and nine when he consummated the marriage: “The Prophet wrote the (marriage contract) with Aisha while she was six years old and consummated his marriage with her while she was nine years old and she remained with him for nine years (i.e. till his death)” (Bukhari 7.62.88).

This doesn’t mean that all Muslims are pedophiles or approve of pedophilia, but it does mean that what Barnette wrote was not unreasonable. Oz, however, wants her banned from the race for it. “It’s reprehensible,” he said, “that she would tweet out something that is defamatory to an entire religion. This state was based on religious freedom. I’m proud as a Pennsylvanian to uphold those founding beliefs that every faith has its merits. Every time she answers a question, she raises more questions. But I think it’s disqualifying to make Islamophobic and homophobic comments, not just for the general election, but the Republican primary as well.”

Disqualifying. So apparently Oz believes that it is or ought to be a condition for running for Senate in the state of Pennsylvania that one thinks Islam is just grand. If we had any journalists, they’d be pressing Oz about whether he thought criticism of Christianity or other religions would likewise disqualify one for office. And they’d be asking about his understanding of the First Amendment and its importance. But since we don’t have any journalists, the good doctor will almost certainly remain unchallenged on these all-important points.

EXCERPT: "The answer is clear: they hoped to frighten Christians into never daring to say anything remotely critical or negative to Muslims about anything in any context, for fear that their words would be interpreted as “blasphemy.” They hoped to intimidate Christians into submission, just as Islamic supremacists and their Leftist allies do in the West with charges of “racism” and “Islamophobia.”"

"“The evidence at trial showed that Saab surveilled some of New York´s most iconic and highly trafficked locations in order to provide critical intelligence on how they could be most effectively attacked.”

If he had succeeded, thousands of people could have been murdered. But remember: calling attention to this kind of activity is “Islamophobic.”"

Fact Check: Pedophilia is a Cornerstone of Islam

The Biden administration appears to be prepared to hand control of America’s national sovereignty over to the World Health Organization (WHO), as Michelle Bachmann explained on Steve Bannon’s War Room.

From May 22 to 28, 2022, the 75th World Health Assembly convenes at the UN in Geneva to vote on proposals that will enable the WHO to assert unprecedented power over the health choices of American citizens, effectively taking control over American sovereignty. Americans never thought this would happen or could happen. But it is now a genuine possibility.

These proposals would have the U.S. cede sovereignty to the WHO during anything that was deemed a health emergency. All in your best interests, of course.