SAVE PASTOR ARTUR: PLEASE DONATE TO STOP THE POLICE STATE 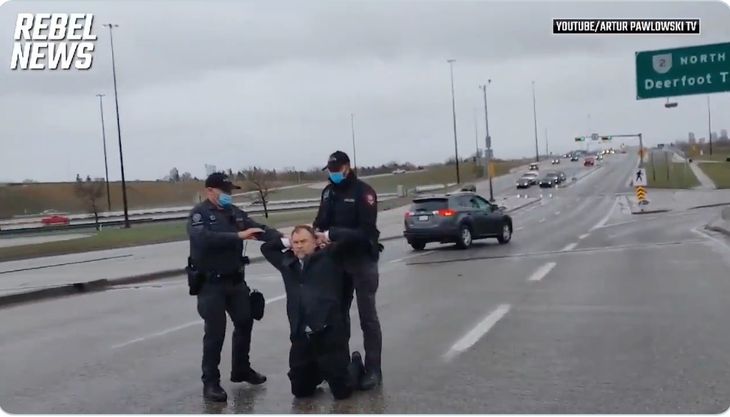 The last time we saw Canadian Pastor Artur Pawlowski he was seen on video chasing cops out of his church and calling them Nazis. They were there to inspect his church for too many parishioners on Good Friday.

On Saturday, the cops came back for Pawlowski, but they’d learned their lesson and didn’t come to his church. He might chase them out again and hurl truth bombs about the police state again.

Ezra Levant of Rebel News reported that the police hunted down Pawlowski on a highway, pulled him over, and dragged him off.

A heavily-armed SWAT team just took down a Christian pastor heading home from church. Police say he’s charged with “inciting” people to go to church. This is the second pastor jailed this year. We’re crowdfunding his lawyers at http://SaveArtur.com

Rebel News reports that Canadian Broadcasting apparently was tipped off about the bust and a photographer, with a very shaky hand, got video of the pastor being arrested.

The CBC photographer gloried in the bust of the pastor, hogtied and carried off by the heavily armed police. Except it wasn’t the pastor in this photo. It pictured his brother.

The reporter wrote on his Twitter account that “being a jerk has its consequences. He doesn’t seem to be laughing now.”

He later deleted his tweeted photo.

This is the image of the day. Pastor Artur Pawlowski being arrested today in Calgary. Being a jerk has its consequences. He doesn’t seem to be laughing now. I bet he’s yelling #GETMEOUT. Next up, KJJ when he goes to the remand to protest. #yyc #ahs #pastorarrest #COVID19AB #ableg pic.twitter.com/czhqNDML18

Police have been cracking down on people who are not wearing masks outside, as well. Mass protests have ended up with people being arrested.

The pastor, who has fought against the coronavirus closures of churches in Canada, was hauled off “like he’s a terrorist,” according to Rebel News.

Police cars swarmed him as he drove home from his church. They ordered him out of his car and made him kneel down on a busy highway.

Heavily-armed SWAT police arrested him. But he’s not a terrorist. He’s Artur Pawlowski, a Christian pastor. And he’s now in jail.

Pawlowski wondered when the police would come for him.

He produced a video in advance to release in case.

If you’re watching this video it means they have successfully arrested me and I am in jail. If you would like to support me and support Rebel News and their legal team that is trying their best to get me out of this trouble please go to SaveArtur.com. … Help me, help my family, help my wife and my children to get me out of this horrible, illegal situation.

Pawlowski was driving home from his Saturday church service when the police arrested him “proactively” for breaking a “new court order” issued two days before.

Earlier today, police arrested an organizer of a church service who was in violation of a new court order obtained by Alberta Health Services (AHS) in relation to mandatory compliance of public health orders for gatherings.

On Thursday, May 6, 2021, AHS obtained a Court of Queen’s Bench Order that applies to gatherings including protests, demonstrations and rallies. This order imposes new restrictions on organizers of protests and demonstrations requiring compliance with public health orders including masking, physical distancing and attendance limits.

Earlier this morning, CPS lawfully enforced this order by proactively serving an organizer of a church service with the court order in an effort to ensure that citizens attending the Saturday service were abiding by the current COVID-19 public health orders. The order was served prior to the church service, and CPS did not enter the church during the service.

The pastor was arrested for “inciting” a church service.

The service organizer acknowledged the injunction, but chose to ignore requirements for social distancing, mask wearing and reduced capacity limits for attendees, and continued with the event.

The police press release explained that they understand the “people’s desire to participate in faith-based gatherings as well as the right to protest… however, we all must comply with public health orders to ensure everyone’s safety and well-being.”

Translation: Church doesn’t contribute to your well-being. We know better than you.

Canadian attorney David Freiheit, who is a popular YouTuber called “Viva Frei,” summed up the tone in his country right now.

He wrote the tweet to Canadian leaders: “This is the new Canada. Pastors being arrested in the streets. Totalitarian regimes would be jealous. I would say ‘shame on you.’ But you can’t feel shame if you have no pride.”

Adam Soos interviews Pastor Artur Pawlowski's lawyer Sarah Miller to find out more about the team working on his case.

Pastor Art was arrested on Saturday in a shocking SWAT team raid, made to kneel in the middle of a busy highway after holding a church service.

Help pay the legal fees of Pastor Artur by making a donation at SaveArtur.com.

Donations will go to The Democracy Fund, a registered Canadian charity that is now helping the 'Fight The Fines' project. So, you can now get an official charitable receipt for a donation made on this page and use it to reduce your Canadian taxes.

He was arrested yesterday in a shocking SWAT team raid, made to kneel in the middle of a busy highway. It was clear from the moment of his arrest that this had nothing to do with a virus, and everything to do with political control.

Since that moment, he’s been treated brutally — thrown painfully into a police car; then forced to sit on a concrete slab, in a jail cell where the lights are never turned off. He is separated from his brother, who was arrested too, but he has no privacy — curious police come to gawk at him like he’s a circus animal.

Our reporter Adam Soos managed to speak with him for five minutes. Here’s the full recording of that call:

As you can hear, Pastor Artur wasn’t aware of the massive wave of support for him around the world — obviously police wouldn’t tell him that. And he was also unaware that his three-person legal team has been trying relentlessly to speak with him — but that police refused to put their phone calls through to him.

This was an interesting interview for a number of reasons. But the fact that police were abusing him, and stopping him from getting legal counsel is outrageous — and shows that this has never been about a pandemic.

(Since that call, his lawyers have been permitted a very brief phone call to him.)

He is being treated as a political prisoner. This isn’t an arrest about a health order. It’s an “extraordinary rendition” like the CIA used to do to terrorists after 9/11.

I promise we’ll keep you posted on Pastor Artur’s state. And if you haven’t yet had a chance to support his legal defence fund, please do — by the looks of things, he’s going to be in legal battles against this injustice for a long time. Please click here, or go to www.SaveArtur.com. Thanks for your support for Pastor Artur.

Rebel News has been defending Pastor Artur for more than a year — he was one of the first Canadians to get a lockdown ticket in April of 2020 for the “crime” of feeding the homeless.

Police called that an illegal gathering too and gave him a whopping fine. We crowdfunded his lawyer back then and we won the case — that same lawyer is still fighting for Pastor Artur now, along with two others.

Now, the unlimited resources of the state are being thrown at Pastor Artur. But we’ve got something better on our side — we’ve got you!

If enough people can help chip in, we’ll be able to continue to have three excellent lawyers fighting back. I truly believe we’ll win. Please, go to www.SaveArtur.com.

This was an interesting interview for a number of reasons. But the fact that police were abusing him, and stopping him from getting legal counsel is outrageous — and shows that this has never been about a pandemic.

May 10, 2021 John
CENSORED POST; JUST CLICK THE LINK FOR THE FULL STORY:
Modern Monetary Theory — upon which socialism rests — says that government can print as much money as it wants without consequence, if it’s done right. Not true!
BY Charles Scaliger
SEE: https://thenewamerican.com/magazine/tna3709/?mc_cid=da35c8de08&mc_eid=ed49b10877