Members of the 1776 Commission, which President Joe Biden disbanded on his first day in White House, are reportedly set to meet again with a renewed focus on combating the teaching of U.S. history based on the Marxist critical race theory.

DeSantis on Critical Race Theory: ‘Offensive’ to Expect Taxpayers to Pay to Teach Kids to ‘Hate Their Country’

This is how the establishment media is working to normalize the “Palestinian” jihad. This CNN article is entirely one-sided, giving the impression that Israel attacked the “Palestinians” gratuitously and is oppressing them. Nary a pro-Israel voice is heard.

Nor does CNN bother to inform its readers that Samidoun supports jihad terrorists. One would never get the impression from this article that there is any jihad terrorism at all. 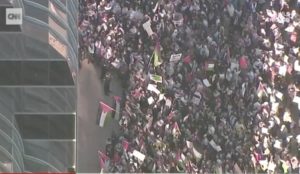 “Protests in support of Palestinians expected across the United States,” by Alaa Elassar and Alisha Ebrahimji, CNN, May 22, 2021:

(CNN)Protesters are expected to rally in cities across the United States this weekend in support of Palestinians, as Israel and Hamas agreed to a ceasefire ending days of destruction and bloodshed….

Samidoun, an international network of organizers and activists working to support Palestinian political prisoners, has published a growing list of global protests planned for this weekend, which it continues to update. As of Friday, it highlighted more than 40 events on Saturday and more than 15 on Sunday in the US.

The events are planned for nearly every major US city, including New York, Houston, Philadelphia, Chicago and Portland.

Protests are also expected to take place internationally, including in the United Kingdom, Australia, France, Italy, South Africa and Pakistan.

Nader Mirfiq, 33, participated in a protest in New Orleans, Louisiana, last weekend. Mirfiq told CNN he wanted to help “open people’s eyes worldwide on the injustices happening in Gaza and in Palestine.”

“This is about being human beings and fighting for what’s right,” he said. “We want justice and we want it now.”

Adil Abbuthalha, who attended a protest in Sacramento, California, said the marches gave him hope for a just and peaceful resolution to the decades-old conflict.

“The unity we saw, regardless of religion or ethnicity, it speaks volumes for the people in Palestine,” Abbuthalha, 23, said. “They are starting to see their voices being heard, and change is around the corner.”

Coptic Pope Tawadros praises Egypt’s gift of $500,000,000 to Hamas ‘in the humanitarian ordeal they are undergoing’

Gaza is not actually suffering through a “humanitarian ordeal.” Hamas has plenty of money, and spent it on rockets to fire at Israeli civilians. If any citizens of Gaza are going hungry, it’s because that was what Hamas chose to do with the aid money that is showered on Gaza.

Pope Tawadros is applauding this because he may have actually internalized Islamic priorities and perspectives as his own, or because he fears what might happen if he didn’t applaud it. In either case, he is acting a dhimmi, a non-Muslim under the hegemony under Islamic law. The dhimmi must not complain or criticize Islam or Muslims in any way; if he does, his “contract of protection” could be revoked, and he could be killed. The way Pope Tawadros is acting here is the way dhimmis have gotten along in Muslim countries for centuries. Many, when they emigrate to the West, have brought this mentality of subservience with them. 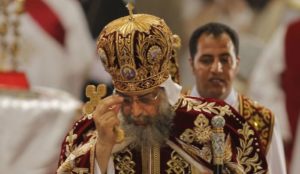 CAIRO (ChurchMilitant.com) – Egypt’s Catholic and Coptic prelates are giving their blessing to a $500 million contribution to Hamas, despite evidence that the jihadist organization uses charitable donations to fund terrorism, suicide bombers and rocket attacks against Israel.

Egypt’s President Abdel Fattah al-Sisi, a devout Muslim, announced Tuesday that his country would send half a billion dollars to support the reconstruction of Gaza following Hamas’ recent conflict with Israel.

Coptic Orthodox Church’s Pope Tawadros II immediately issued a statement praising the initiative as a gesture of concrete support for the “Palestinian brothers, in the humanitarian ordeal they are undergoing” given Egypt’s “historic role” in supporting the Arab people.

The Council of Catholic Patriarchs and Bishops in Egypt, presided over by Coptic Catholic Patriarch Ibrahim Isaac Sidrak, also published a statement lauding al-Sisi’s gift “to support our Palestinian brothers.”

“It is sad to see Pope Tawadros endorsing the financing of Hamas, which is what money for the ‘reconstruction of Gaza’ will go to in reality,” eminent Islamic historian Robert Spencer told Church Militant, explaining Tawadros’ “refusal to endorse this funding could result in a new round of the persecution of Christians in Egypt.”

Spencer, author of 21 books on Islam and the Middle East, elaborated:

Pope Francis also has never condemned Hamas, and this causes further confusion among Roman Catholics as to how the conflict should be morally evaluated. Pope Francis may be keeping quiet for the same reason that Pope Tawadros is speaking — fear of Islamic reprisals. But this only encourages more jihad violence against Christians in the long run, as the jihadis see that it works.

Grand Imam of Al-Azhar Ahmed al-Tayyeb — Pope Francis’ chief Muslim dialogue partner and co-signatory to the pontiff’s Human Fraternity concordat with Islam — also hailed Egypt’s dole for “reflecting the Palestinian cause as a priority for Egyptians and Arabs.”

“It is also an affirmation of Egypt’s support of the legitimate and fair Palestinian cause, and the Palestinians’ rights in establishing an independent state with Jerusalem as the capital,” al-Tayyeb emphasized.

However, Ambassador Dennis Ross, a peace negotiator between Israel and the Palestinians for at least four U.S. presidents, insists that donors “need to put Hamas in a position where they have to choose between their rockets and the well-being of Gaza.”

“The issue is massive reconstruction for no rockets,” Ross said. “And the minute you see irregularities, everything stops.”

Ross noted the failure of earlier efforts to rebuild Gaza. Any future monitoring system would need to be an effective, round-the-clock endeavor that would halt reconstruction if Hamas was found to be storing, building or preparing to launch rockets, he maintained.

The Trump administration stopped funding aid for Gaza through the United Nations Relief and Works Agency in 2018, but Biden restored it in April, just before the conflict began.

‘Too Close’ to Hamas?

Multiple sources on the ground told Church Militant that the Egyptian prelates had “bowed to Islam as dhimmis” [literally “protected persons subject to Muslim hegemony”] and were content “to roar like lions against Israel and purr like pussycats while petted by Hamas.”

While Egypt’s ecclesiastical hierarchy continues to denounce Israel, it has tacitly endorsed Gaza’s rulers even though Hamas’ (Harakat al-Muqawamah al-Islamiyya) own declarations explicitly identify it as a jihadist outfit committed to the destruction of Israel, sources added.

Vittorio Emanuele Parsi, professor of international relations at Italy’s Sacred Heart Catholic University, notes the failure of prelates like Latin Patriarch of Jerusalem Michel Sabbah to condemn terrorism because they are too close to Hamas.

Coptic Pope Cyril VI even banned Egyptian Christians from going on pilgrimage to Jerusalem in 1967 and the current incumbent Pope Tawadros II has upheld the ban while not enforcing it. Violators were often denied Communion and at times threatened with excommunication.

“The position of the Church remains unchanged, which is not going to Jerusalem without all our Egyptian (Muslim) brothers,” Church spokesman Boulos Halim said, responding to Pope Tawadros II breaking the ban to attend a funeral in Jerusalem in 2015….

This will free up more cash for Hamas to use to replenish its rocket supply and enable it to resume its jihad more quickly. 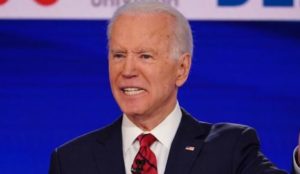 President Biden on Thursday endorsed an Egypt-brokered ceasefire between Israel and Hamas — while vowing the US would help rebuild Gaza and restock Israel’s missile defense system.

“We remain committed to work with the United Nations and other international stakeholders to provide rapid humanitarian assistance and to marshal international support for the people of Gaza and the Gaza reconstruction efforts,” Biden said in a speech from the White House.

“We will do this in full partnership with the Palestinian Authority — not Hamas, the Authority — in a manner that does not permit Hamas to simply restock its military arsenal.”

Hamas, an Islamic fundamentalist offshoot of Egypt’s Muslim Brotherhood, has governed Gaza since winning a 2007 Palestinian civil war against the less-radical leadership of the Palestinian Authority.

Biden also said the US would help replenish Israel’s Iron Dome missile defense system, which shot down many rockets fired from Gaza.

“I extend my sincere gratitude to President el-Sisi and the senior Egyptian officials who plays such a critical role in this diplomacy,” Biden said.

“These hostilities have resulted in a tragic test of so many civilians, including children, and I send my sincere condolences to all the families, Israeli and Palestinian, who have lost loved ones and my hope for a full recovery for the wounded.”…