US professors and NGOs participate in Muslim Brotherhood-affiliated conference

Muslim Brotherhood organizations in the United States are dedicated, according to a captured internal document, to “eliminating and destroying Western civilization from within, and sabotaging its miserable house.” But it’s no surprise that the University of Denver and these professors would be involved in this. The universities in the U.S. are bought and paid for. Universities today are not institutions of higher learning, but indoctrination centers for far-Left propaganda. This did not happen by accident. At Georgetown University, Saudi money funds the Alwaleed bin Talal Center for Muslim-Christian Understanding, and its Bridge Initiative, both of which are dedicated to propagating the fictions that Islam is a religion of peace and that Sharia is benign and compatible with democracy an intellectual veneer while smearing and defaming all those who speak the truth about Islam and Sharia as “Islamophobes.” Georgetown’s faculty is full of Wahhabis, Salafis, and apologists for Islam, including Islamic convert and pro-slavery spokesman Jonathan A. C. Brown. And that’s just Georgetown. Imagine what it must be like at the schools where these academic ideologues indoctrinate their hapless students. 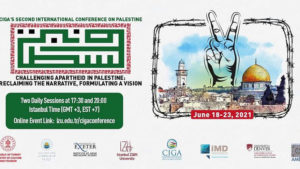 (June 25, 2021 / JNS) Israel continues to draw the ire of hateful detractors who wish to see what they perceive as the “apartheid Jewish Zionist colonial state” replaced in full by a state called Palestine.

The Center for Islam & Global Affairs (CIGA) in Turkey hosted its second international conference on Palestine from June 18-23, sponsored in part by the Muslim Brotherhood-affiliated Turkish umbrella group the Global Coalition for Quds and Palestine. The program was replete with Palestinian propaganda, revisionist history, and blatant anti-Semitism and anti-Israel vitriol.

The conference, which features online sessions with professors and anti-Israel activists from around the world, was initiated by Sami Al-Arian, who pled guilty in 2006 to providing services and assistance to the U.S.-designated terror group Palestinian Islamic Jihad (PIJ). The U.S. Justice Department sentenced Al-Arian to prison time and deportation, after which Al-Arian established CIGA, a center that he uses to promote his anti-Israel agenda.

What has concerned the pro-Israel community is that a number of the panelists at the conference are professors at publicly funded American schools. The University of Denver’s Josef Korbel School for International Studies, for example, is a co-sponsor; its logo features prominently on the advertisement.

Miriam Elman, executive director of the Academic Engagement Network, an educational nonprofit that focuses on combating campus anti-Semitism and Israel delegitimization on U.S. campuses, told JNS she was “shocked” to see the logo of the University of Denver featured as such.

“In light of the disturbing connections between some of the slated speakers and anti-Israel terrorist organizations,” she said, “the university must immediately condemn terror violence, and hopefully, reconsider its co-sponsorship of this deeply offensive program.”

A JNS inquiry to the Korbel School received no response by the time of publication.

Called for the destruction of Israel

In his address to one of the numerous panels, Al-Arian slammed Israel, telling the conference “there is no doubt we are talking about a settler, colonialist movement. What we see here today is an attempt to depopulate the indigenous people, and bring in as many Jews from around the world and try to bring a system that is properly being identified now as apartheid. There is no doubt about this.”

He called Israel a “racist movement” that works in a “Zionist onslaught” to replace the “indigenous people,” and called for the destruction of Israel, saying “the essence of the struggle should be to dismantle this structure,” i.e., meaning Israel.

Eleven American professors were initially slated to participate in the conference as speakers—nine from public universities. Among them were Joseph Massad from Columbia University and Lubna Qutami, assistant professor at the University of California, Los Angeles. Qutami is also a founder of the terror-supporting group Palestinian Youth Movement (PYM).

San Francisco State University professor Rabab Abdulhadi, who sought to invite terrorist and airplane hijacker Leila Khaled to give a lecture to her students and was blocked by Zoom, YouTube and Facebook, attempted to discredit the right-wing pro-Israel lobby, and went on to name every existing organization and individual.

Huwaida Arraf from the National Lawyers Guild, USA, accused Israel of committing crimes of apartheid and genocide, and of acting as a “colonial regime.”

Ahlam Muhtaseb of California State University, San Bernardino, accused Israel of “ethnic expulsion of Palestinians from their homes” and stated that Palestinian activists are “reclaiming the narrative and outsmarting the colonial, imperial powers behind social media.”

Despite the fact that the conference was hosted by a convicted supporter of a jihadist terror group and sponsored by a group that has strong affiliation to the Muslim Brotherhood, multiple representatives of NGOs participated as speakers, including Omar Shakir, Israel and Palestine director at Human Rights Watch. In 2016, Shakir was expelled from Israel for promoting the anti-Israel BDS boycott movement….