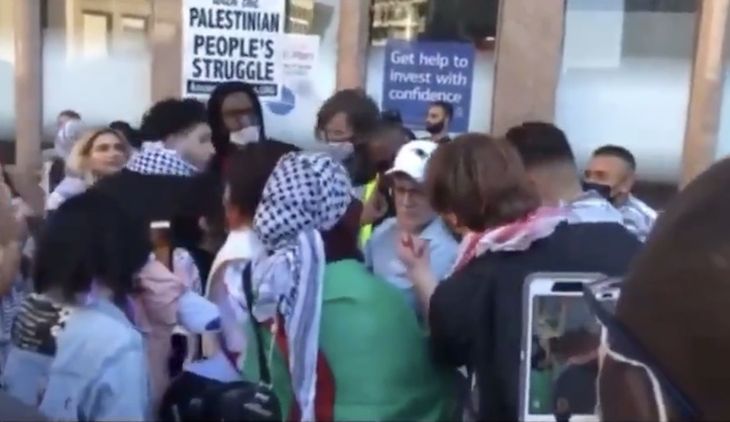 On Thursday, a group of pro-Palestinian activists surrounded Dexter Van Zile of the Committee for Accuracy in Middle East Reporting and Analysis (CAMERA) at a Students for Justice in Palestine (SJP) rally at the University of Massachusetts in Boston. The pro-jihad protesters tried to intimidate Van Zile physically, poking their fingers in his face, shouting at him, shoving him, spitting at him, and calling him a “bitch,” “Nazi,” and “f**king pig.” Then they no doubt went away believing themselves to be on the side of righteousness. It was a small incident that reveals many of the big problems facing America today, thanks to the American Left.

Recommended: WATCH: Philly BLM Rioters Shout ‘Get the F**k Out’ to Jews, Call Them ‘Synagogue of Satan’

Well, yes. And here we are. Because in the first place, no one in the crowd was saying that Van Zile should be left alone for any reason other than that surrounding him, yelling at him, and spitting on him would make the demonstrators look bad. No one reminded them of the American tradition of free discourse and Voltaire’s old adage, now completely forgotten, “I disapprove of what you say, but I will defend to the death your right to say it.” The American Left has now replaced that idea, which is at the foundation of any free society, with “If I disapprove of what you say, I will revile you, slander you, and physically menace until you are too afraid to stand up against me.”

Antifa, Black Lives Matter, and pro-Palestinian activists generally take that principle for granted and are so certain of their own righteousness that they apparently believe that it gives them a free pass to be as vicious and violent toward those whom they hate as they wish because it’s all for their sacred cause. This was how Joseph Stalin, Mao Zedong, Pol Pot and the rest justified murdering millions of their own people: on their blood-soaked graves would be built the Marxist utopia of a classless society in which the workers controlled the means of production, and that justified everything.

The protesters who behaved so thuggishly toward Van Zile, and who appeared to be about half his age, likewise are convinced, despite abundant evidence to the contrary, that they are on the side of the oppressed victims. Meanwhile, among those being oppressed by slight, balding Zionists in Boston, Al-Hayat Al-Jadida, the official Palestinian Authority daily, just published an article praising a jihad terrorist for naming his son Eichmann, after Adolf Eichmann, one of the chief architects of the Nazi genocide of the Jews.

And Marwan Abu Ras, who according to the Middle East Media Research Institute (MEMRI) is a “Hamas MP and member of Board of Trustees of the International Union of Muslim Scholars,” said in early June: “Massacring this enemy is a divine order. [The Quran says:] ‘So strike them upon the neck and strike from them every fingertip.’ Striking the necks of this enemy is a duty according to the shari’a. Anyone who can massacre this enemy should not neglect this duty, because this enemy is the enemy of the Islamic nation.”

Recommended: This CNN Contributor Hates Israel So Much, He Praises Hitler For Killing Jews. Yes, Really.

The day after Marwan Abu Ras said that, Palestinian Authority President Mahmoud Abbas ordered the family of a jihad terrorist who had murdered two Israelis be given over $40,000, as well as an upgrade to their living quarters. In issuing this order, Abbas was thumbing his nose at the Taylor Force Act, which prohibits the U.S. government from giving aid to entities that fund or reward terrorism. Abbas knows that Old Joe Biden’s handlers don’t care about that law, and are happy to break it.

So we have people who revere Hitler, who think killing their enemies is commanded by their god, and who reward terrorists with cash bonuses and new housing. These are the oppressed victims Dexter Van Zile was threatening by his presence in Boston. These are the ones who suffer so much that their advocates think screaming in the face of a lone middle-aged man is a meritorious act. And if leftists can accept this, just imagine what is coming.