We’re back in full-on Obama mode now, betraying allies and giving aid and comfort to enemies. It will not, of course, end well. 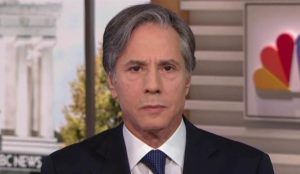 The Biden administration is walking back the United States’ historic recognition of Israeli sovereignty over the contested Golan Heights region along Israel’s northern border, a significant blow to the Jewish state and one of the Trump administration’s signature foreign policy decisions.

The Trump administration declared the territory—seized by Israel from Syria in 1967 and later annexed by the country—to be wholly part of the Jewish state in 2019. Then-secretary of state Mike Pompeo took a trip to the area in 2020 and reaffirmed that America formally abandoned a decades-long policy of considering the area occupied.

Secretary of State Antony Blinken first raised questions about the Biden administration’s view on the matter in February, when he would not say if his State Department continues to abide by the former administration’s decision. At the time, Blinken would only say the Golan Heights “remains of real importance to Israel’s security,” but that its formal status remains unclear. Pressed on the issue by the Washington Free Beacon, a State Department official said the territory belongs to no one and control could change depending on the region’s ever-shifting dynamics.

The shift in policy is already causing outrage among Republican lawmakers who backed the Trump administration’s decision and hoped to see it continue. It is also likely to rankle Israeli leaders of all political stripes, the plurality of whom say the Golan Heights is absolutely vital to Israel’s security in light of persistent threats from the Iran-backed Hezbollah terror group in Lebanon and other militant forces stationed in war-torn Syria.

“The secretary was clear that, as a practical matter, the Golan is very important to Israel’s security,” a State Department official told the Free Beacon. “As long as [Bashar al-Assad] is in power in Syria, as long as Iran is present in Syria, militia groups backed by Iran, the Assad regime itself—all of these pose a significant security threat to Israel, and as a practical matter, the control of the Golan remains of real importance to Israel’s security.”

Recognizing Israel’s control as a “practical matter,” however, falls far short of the formal policy change ordered by the Trump administration, which became the first government to recognize Israel’s complete control over the territory. As it stands now, U.S. policy on the matter is unclear, at best.

Pompeo, who was central to formulating and advancing the Trump administration’s decision on the Golan Heights, told the Free Beacon that the current administration is jeopardizing Israel’s security at a time when Iran-backed militants continue to plot attacks on the country’s northern cities.

“The Golan Heights are not occupied by Israel, they are a part of it. The Israelis have a right to it as sovereign land,” Pompeo told the Free Beacon. “To suggest that these lands should be returned to Syria, even if conditioned on changes in the Syrian regime, is inconsistent with both Israeli security and the international law.”

The State Department’s “suggestion that if Assad falls and the Iranians leave Syria, the Golan Heights should be given to Syria misreads history and misreads the eternal security needs of the state of Israel,” Pompeo said….