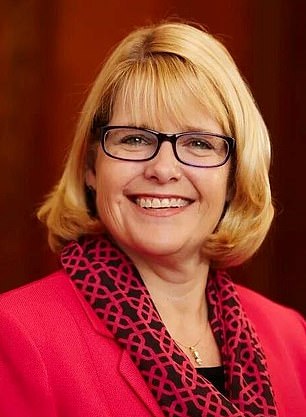 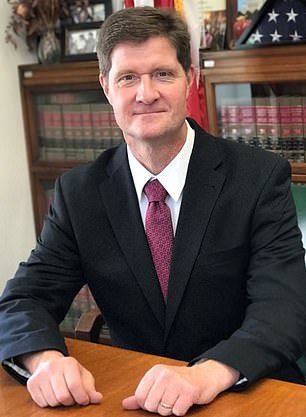 ABOVE: The judge who granted the driver's bond was Michelle Havas (left). Milwaukee County District Attorney John Chisolm (right) is an enthusiastic bail reform advocate who previously suggested the state should replicate San Francisco's bail reform to do away with cash bond on minor crimes

Milwaukee prosecutors are conducting an internal review into their own office’s decision to make an "inappropriately low" bail recommendation for Darrell Brooks Jr., the person of interest in nearby Waukesha after an SUV plowed through a Christmas parade. The horror left at least five people dead and 40 injured – including 18 children rushed to Children's Wisconsin hospital in Milwaukee. Brooks has multiple pending cases in Milwaukee County – including a 2020 case involving two counts of second-degree recklessly endangering and being a felon in possession of a firearm, according to a spokesperson for Milwaukee District Attorney John Chisholm. Bail was originally set at 10,000 and later reduced to 7,500, the district attorney’s office said. But due to a court scheduling conflict that would have deprived Brooks of his right to a speedy trial his bail was again reduced, this time to just 500, which he posted on Feb. 21, 2021, according to prosecutors. Earlier this month, Milwaukee authorities charged Brooks with another reckless endangering out, felony bail jumping, battery, obstructing an officer, and disorderly conduct. He allegedly ran a woman over with what may have been the same SUV that wreaked havoc on the Christmas parade. He was released on 1,000 cash bail on Nov. 11. "The State’s bail recommendation in this case was inappropriately low in light of the nature of the recent charges and the pending charges against Mr. Brooks," Chisholm’s office said Monday. "The bail recommendation in this case is not consistent with the approach of the Milwaukee County District Attorney’s Office toward matters involving violent crime, nor was it consistent with the risk assessment of the defendant prior to setting of bail."The DA’s office said an internal review of the bail recommendation decision is underway. In a recent case, a woman told police that Brooks charged into her hotel room, shouted profanity at her, and took her cellphone before driving away. He allegedly circled back later, found her walking to a nearby gas station, and punched her after she refused to get into his car. When she started to walk away, he allegedly ran her over with his vehicle. Police arrested Brooks at his home at 4:25 p.m. on Nov. 2, according to the criminal complaint, which also notes that he owned a maroon Ford Escape with license plate ADP 9256. He ran into the home in an alleged attempt to evade arrest.
__________________________________________________________________ 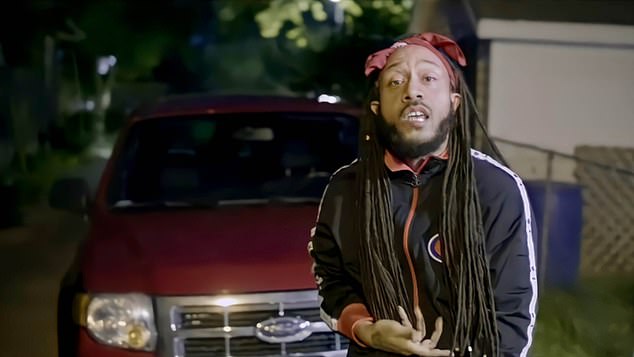 The moment Darrell Brooks was caught by Waukesha cops as he banged on a stranger's door, asked for a sandwich, and claimed he was waiting for an Uber - 20 minutes after 'plowing his SUV through Xmas parade and killing five'

Doorbell camera video obtained by NBC News shows Brooks, wearing a red T-shirt, knocking on the door of resident Daniel Rider's home, located around half a mile from the Waukesha Christmas parade.

A timestamp from the video shows he knocked on the door at one minute past 5 pm local time, which is roughly 20 minutes after Brooks allegedly drove his red SUV through safety barriers and into the crowds, killing five and injuring 48 others.

In the wake of what happened in Waukesha on Sunday evening, churches and schools have asked people to open their hearts and pray for affected families. Business owners have opened their doors to serve as a place of refuge, with community members leaning on each other. Darrell Brooks was arrested and charged with multiple homicide counts over the incident. Brooks, who has a lengthy criminal history, was recently locked up on felony charges but was released after he posted a $1,000 cash bail earlier this month.

'The Five' panel discusses how suspect Darrell E. Brooks Jr., 39, was let out on $1,000 bond days before the attack in Waukesha, Wisconsin

Waukesha Christmas parade horror suspect Darrell E. Brooks Jr. made bail twice in Wisconsin this year despite having an active sex crime warrant out of Nevada and claiming to be indigent, court records show.