Incitement to violence against any group should always be blocked. The problem here is that Islamic advocacy groups and their allies in the West have for years claimed that any honest discussion of the motivating ideology behind jihad violence was “anti-Muslim hate.” Facebook already makes such discussion virtually impossible to find. Expect it to be completely blacked out in a Biden/Harris administration. 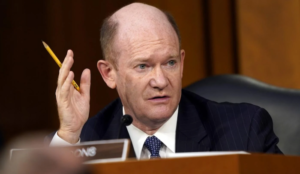 “US senators call on Facebook to address anti-Muslim bigotry,” Middle East Eye, November 16, 2020 (thanks to Henry):

Democratic senators are calling on Facebook to “do more” to mitigate the spread of anti-Muslim bigotry, after the social media giant was criticised for failing to address attacks against the faith group on multiple occasions, including the aftermath of the Christchurch shootings.

In a letter sent to Facebook to CEO Mark Zuckerberg on Monday, a group of 15 Senators said the platform needed to immediately enforce its community standards to address anti-Muslim hate and ban the use of event pages for the purpose of “harassment, organizing, and violence” against the Muslim community.

The letter also said that Facebook had not taken proper steps to enforce its “call to arms” policy, a year-old rule created in large part due to pressure from Muslim advocacy groups, which since 2015 had flagged multiple instances where organisers of Facebook events had advocated for followers to bring weapons to mosques and other places of worship.

“We recognize that Facebook has announced efforts to address its role in the distribution of anti-Muslim content in some of these areas,” the letter, signed by Senator Chris Coons, Elizabeth Warren, Bernie Sanders and 12 others, said.

“Nevertheless, it is not clear that the company is meaningfully better positioned to prevent further human rights abuses and violence against Muslim minorities today.”

An independent civil rights audit of the social media company released in July outlined that despite having policies that did not allow for hate speech against religious groups, incidents of hate speech continued to persist across Facebook.

Muslim Advocates, a rights group that called for the audit two years ago, thanked the senators for writing the letter.

“Since 2015, Muslim Advocates had warned Facebook that the platform’s event pages were being used by violent militias and white nationalists to organize armed rallies at mosques,” the group’s executive director Farhana Khera said on Monday.

“We need to know what Facebook plans to do to end the anti-Muslim hate and violence enabled by their platform – and end it now.”…

“As members of Congress who are deeply disturbed by the proliferation of this hate speech on your platform, we urge you to do more,” the senators’ letter read.