IT'S NOT JOE BIDEN, BUT RATHER KAMALA HARRIS BEHIND THE MASK, STEALING ALL THE CANDY (LIBERAL TAXATION):

President Donald Trump played a Halloween themed campaign video on Saturday for his supporters at a rally in Reading, Pennsylvania.

Turkey’s President Recep Tayyip Erdogan supports ISIS, is virulently anti-Israel, and is now recruiting jihadists from Syria with plans to attack Greece. Turkey also violated Greek airspace 45 times, and meddles in Libya. Erdogan called the EU “sick” and “collapsing”; he called French President Emmanuel Macron mentally unbalanced for protecting the freedom of speech in France in the wake of a teacher’s beheading for offending Islam. He referred to Dutch politician Geert Wilders as a “terrorist” for supporting the right to “offensive” free speech. And according to Armenian reports, Turkish leader Erdogan has been sending Syrian jihadists and F-16 combat jets to aid Azerbaijani forces in their conflict with Armenians. To this day, Erdogan also denies the Armenian genocide. Yet Canadian Prime Minister Justin Trudeau actually “discussed the issue of WESCAM exports to Turkey with President Recep Tayyip Erdogan during a phone conversation in April.”

Trudeau already has a worrisome record in advancing the cause of Islamization in Canada. 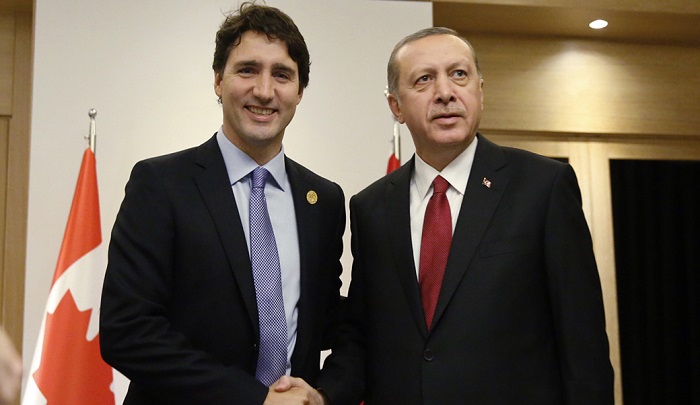 Canada’s opposition Conservative Party wants answers from the government of Prime Minister Justin Trudeau over its decision to allow a Canadian company to sell advanced drone technology to Turkish arms manufacturers despite its own ban on military exports to Turkey.

The issue of Canadian defence exports to Turkey was brought to the fore once again last week when Armenian authorities displayed remains of what they claim is a Turkish combat drone, featuring high-tech Canadian-made optical sensors and a target acquisition system.

A spokesperson for the Armenian Ministry of Defence said the Turkish Bayraktar TB2 drone was shot down by Armenian air defence units during fighting in Nagorno-Karabakh on Oct. 21.

Armenian officials released detailed photos and video of the drone’s optical sensors and its target acquisition system that experts consulted by Radio Canada International identified as an CMX-15D system produced by L3Harris WESCAM in Burlington, Ont.

The WESCAM CMX-15D system — which basically allow drone operators to see what’s happening on the ground and paint targets for airstrikes, either by the drone’s own missiles or by other aircraft — was manufactured in June of this year and installed on the downed Bayraktar TB2 in September, said Shushan Stepanyan, spokesperson for the Armenian Defence Ministry.

Speaking during question period in the House of Commons on Monday, Conservative Shadow Minister of Foreign Affairs Michael Chong demanded to know why the sale of these WESCAM systems was allowed to proceed despite the arms embargo announced by Canada following the Turkish invasion of northern Syria in October of 2019.

Chong referred to a story by Radio Canada International, reporting that Trudeau discussed the issue of WESCAM exports to Turkey with President Recep Tayyip Erdogan during a phone conversation in April.

“Last April, the prime minister spoke with Turkish President Erdogan and reports indicate he committed to addressing Turkish concerns about the suspension of these arms exports,” Chong said in the House of Commons.

“Subsequently, seven drone systems were approved for export from Canada to Turkey. Did the prime minister or foreign affairs minister override the recommendations of Global Affairs officials and approve these exports to Turkey?”…

LYNCHBURG, Va. — Jerry Falwell, Jr., former president of Liberty University, which hails itself as the world’s largest Christian university, has filed a lawsuit against the school to allege that officials “needlessly injured and damaged his reputation” via statements made following his resignation. Falwell had been placed on leave after posting, and then deleting, a photo in which he had his pants unzipped, and then was asked to resign after a former business partner revealed that he had an affair for years with Falwell’s wife and claimed that Falwell was privy to it.

According to a press release, Falwell argues that Giancarlo Granda, who engaged in sexual activity with his wife, Becki, had made false allegations against him in an attempt to extort money out of the couple. He says that Liberty University board members accepted the allegations without investigation in order to “force” his resignation.

The suit states that officials then released statements that, by effect, served to “tarnish, minimize, and outright destroy the legacy of the Falwell family and Mr. Falwell’s reputation.”

“We attempted to meet several times with the Liberty University Board of Trustees Executive Committee but were unsuccessful in doing so. Thus, we were forced to seek remedy for Mr. Falwell’s ongoing injuries and damage to his reputation through the court,” attorney Robert Raskopf of the law firm Quinn Emanuel said in a statement.

As previously reported, Falwell, the son of the late Moral Majority leader Jerry Falwell, Sr., resigned from Liberty University in August after acknowledging that his wife had a years-long affair with a young business partner.

Granda, who worked with the couple surrounding a hostel that he owned in Miami, Florida, took the story to the media, claiming that Falwell sat in the room or watched from a camera while sexual encounters happened over the course of seven years.

He also released a recorded phone call in which Becki Falwell expressed that she struggled with the idea of him dating other girls, even to the point of tears, and Jerry Falwell Jr. remarked, “You’re going to make her jealous, Gian.”

Falwell denied having any participation in the affair, stating that he “learned” about it and became so upset that he lost 80 pounds.

“Becki had an inappropriate personal relationship with this person, something in which I was not involved,” Falwell said in a statement to the Washington Examiner after Reuters first reported on the matter. “It was nonetheless very upsetting to learn about.”

He stated that he forgave his wife, and the couple sought to put distance between themselves and Granda, but he became “aggressive.”

“Eventually, he began threatening to publicly reveal this secret relationship with Becki and to deliberately embarrass my wife, family, and Liberty University unless we agreed to pay him substantial monies,” Falwell alleged. “We were doing our best to respectfully unravel this ‘fatal attraction’ type situation to protect our family and the university.”

Thursday’s press release from Falwell’s attorney also contended, “Based on research and investigation, this individual appears to be supported financially by political opponents of Mr. Falwell in the midst of a heated presidential campaign, likely including the anti-Trump political action committee called The Lincoln Project.”

Granda has denied that engaging in extortion, posting a statement to Twitter that read in part, “[L]et me be clear, I am not profiting in any way, shape or form from coming forward and telling the truth about the Falwells.” He said that Falwell was lying in an attempt to “discredit” him.

He also alleged that Falwell sent him an inappropriate photo of a student, but Falwell sought to defend himself by telling the Washington Post that it was a screenshot from a video where his daughter-in-law’s friend showed her “granny panties” under her skirt, which he thought was funny and subsequently shared with others.

Falwell had already been placed on indefinite leave two weeks before his resignation after he posted — and then deleted — a vacation photo to Instagram where he mimicked his wife’s pregnant assistant, but was photographed knowing that his pants were unzipped.

Falwell told WLNI “MorningLine” that neither he or the assistant were able to button their pants.

“She’s pregnant, so she couldn’t get her pants up,” Falwell stated. “I had on a pair of jeans that I hadn’t worn in a long time, so I couldn’t get mine zipped either.”

“So, I just put my belly out like hers,” Falwell continued. “I should never have put it (the photo) up and embarrassed her.”

The photograph was taken at a “Trailer Park Boys”-themed outing on a yacht, where the Falwells were on vacation. The vile Canadian-based show filled with profanity, alcoholism, drug use, sexual immorality and other ungodliness features episode titles such as “[Expletive] Community College, Let’s Get Drunk and Eat Chicken Fingers,” “I’m Not Gay, I Love Lucy … Wait A Second, Maybe I Am Gay,” “Gimme My [Expletive] Money Or Randy’s Dead”, and “You Want The Lot Fees, [Sexual Vulgarity]”.

A coalition of Liberty University alumni, students and faculty soon launched a petition calling for the Board of Trustees to permanently remove Falwell from his position as president and “replace him with a responsible and virtuous Christian leader.” They said that the matter was not over a single incident but a pattern of behavior throughout much of his tenure.

A week after his departure, it was revealed that Becki Falwell called 911 after being contacted by her husband to advise that he had fallen and was hurt. She broke into the house to find him bleeding and admitted to the operator that Falwell had been drinking, but when asked how much, she replied, “I’m not going to answer that question.”

In his most recent statement, Falwell accused Liberty University of “jumping to conclusions” about the Granda matter. While it is not clear exactly which remarks from the school he takes issue with, the Executive Committee had commented in one press release, “[W]e have learned enough about the past to know that we had no choice but to take the leadership of Liberty University in a new direction.”

“I am saddened that university officials, with whom I have shared so much success and enjoyed such positive relationships, jumped to conclusions about the claims made against my character, failed to properly investigate them, and then damaged my reputation following my forced resignation,” he said.

“While I have nothing but love and appreciation for the Liberty community, and I had hoped to avoid litigation, I must take the necessary steps to restore my reputation and hopefully help repair the damage to the Liberty University brand in the process.”

As previously reported, Liberty University has hired a forensics firm to investigate “all facets” of the school’s operations throughout Falwell’s tenure as president, including financial, real estate and legal dealings.

It said in a statement on Aug. 31 that, going forward, Liberty University wants to ensure that its leaders reflect the spiritual mission of the institution by their “words, actions and example.”

“That is why, in addition to starting a search for a new president, we are also reviewing options to establish a new role in the top leadership of the university for someone who will serve as a spiritual coach, mentor, and guide to help ensure that every member of the university leadership fulfills his or her spiritual responsibility to live out the Christian walk expected of each and every one of us at Liberty,” the committee outlined.