I refer to DACA (Deferred Action- Childhood Arrival) as a scam because while it was foisted on Americans as a program to provide legal protection to young aliens, in reality, it enabled aliens in their mid to late thirties to acquire lawful status.  We will explore the true nature and background of DACA shortly, but first, there has been an important development with this program.

That news report included this excerpt:

The judge, Andrew S. Hanen of the United States District Court in Houston, said President Barack Obama exceeded his authority when he created the program, Deferred Action for Childhood Arrivals, by executive action in 2012.

But the judge wrote that current program recipients would not be immediately affected and that the federal government should not “take any immigration, deportation or criminal action” against them that it “would not otherwise take.”

The New York Times article went on to note, in part:

Judge Hanen, who was appointed by President George W. Bush, ruled that the creation of the program violated the Administrative Procedure Act, in part because comment from the general public was never sought. “D.H.S. failed to engage in the statutorily mandated process,” he wrote, “so DACA never gained status as a legally binding policy that could impose duties or obligations.”

Now let’s delve into the background behind the creation of the DACA con game by President Obama.

On June 15, 2012 then-President Barack Obama announced, during a Rose Garden event at the White House, that he was going to create the DACA program to provide temporary lawful status for what he claimed were young “undocumented immigrants.”  DACA is an acronym for Deferred Action- Childhood Arrivals.

To begin with, Mr. Obama claimed that he was exercising “prosecutorial discretion” to create DACA.  Prosecutorial discretion is a valid concept whereby the limited resources for law enforcement are used to address more serious problems while intentionally ignoring relatively minor law violations.

However, prosecutorial discretion could never be reasonably used to provide lawful status to law violators under the guise of making effective use of limited resources.  Providing lawful status to illegal aliens should require legislation and such a program would create additional burdens that squander and not make effective use of limited resources.

The notion of “Deferred Action” was one that was used by the former INS and the subsequent follow-on immigration agencies of the DHS (Department of Homeland Security) on a limited, case-by-case basis for humanitarian purposes.

If, for instance, a family from another country was visiting in the United States and a family member was injured or fell ill with a serious injury or illness, Deferred Action would permit the family to remain in the United States for as long a period as necessary, as attested to by their attending physician(s).  Immigration authorities would require that their doctors provide periodic updates until the alien was well enough to travel back to their home country.

The action that was deferred was the requirement that aliens depart from the United States.

Deferred Action was never meant to be used to act as a stop-gap in anticipation of pending amnesty for huge numbers of illegal aliens to enable them to remain in the United States.

In reality, Congress had acted and, indeed, acted in accordance with the Constitution.  It is just that Congress did not act the way Obama wanted when it voted to not enact the DREAM Act.  (DREAM Act is an acronym for Development, Relief and Education for Alien Minors) that would have provided lawful status for millions of illegal aliens who claimed to have entered the United States prior to their 15th birthday- however, these aliens could be as old as 35 years of age when they made their applications.

I am compelled to note the hypocrisy in the name of that failed legislative action.  The term “Alien” has come to be reviled by the open borders/immigration anarchists, even though the term alien is defined by the Immigration and Nationality Act as simply being, “Any person, not a citizen or national of the United States.”  However, apparently when the term alien was essential to creating the acronym that conjured up the image of the “American Dream” the supposedly dastardly term “alien” became palatable.

The actual purpose for the DREAM Act and for DACA was to dupe kind-hearted Americans into believing that this was about helping children.  In reality, this was not about children but about flooding America with huge numbers of aliens for political purposes and to enrich those who profit from massive immigration and provide huge campaign contributions to politicians who do their bidding

The immigration system has morphed into a delivery system that, as I have noted in the past, provides an unlimited supply of clients for immigration law firms.  There is no shortage of immigration lawyers among the ranks of politicians from both parties and on all levels of government- particularly the U.S. Congress.

Among those who also benefit from this “immigration delivery system” are companies that want cheap and exploitable labor, religious organizations that want to fill the seats in their houses of worship, the U.S. Chamber of Commerce, labor unions that seek to increase their membership so that they get more money (union dues) and increased political leverage.

Fraud would permeate this program because there would be no way to interview all of these aliens and no way to conduct field investigations to determine if the information contained in their applications was accurate and truthful.  The 9/11 Commission, in point of fact, identified immigration fraud as a key vulnerability that was repeatedly exploited by terrorists to enter the United States and embed themselves.  This nexus between immigration fraud and terrorism and national security was the predication of my article, Immigration Fraud: Lies That Kill.

These concerns caused me to write an Op-Ed for the Washington Times that was published on June 22, 2007, Immigration bill a ‘No Go’, in which I proposed changing the name of the legislation from Comprehensive Immigration Reform to “The Terrorist Assistance and Facilitation Act.”
The hotly contested bill was being debated in the U.S. Senate at the time and then-Senator Jeff Sessions quoted my article during the floor debate on three separate days and sent me a certificate in which he attributed my article, in part, to his successful efforts to block that wrong-headed and dangerous bill back then.
We will give the “last word” to none other than former President Obama.
On November 18, 2014, the Washington Post published a report, Obama’s royal flip-flop on using executive action on illegal immigration that included this excerpt:

With respect to the notion that I can just suspend deportations through executive order, that’s just not the case, because there are laws on the books that Congress has passed — and I know that everybody here at Bell is studying hard so you know that we’ve got three branches of government. Congress passes the law. The executive branch’s job is to enforce and implement those laws. And then the judiciary has to interpret the laws.
There are enough laws on the books by Congress that are very clear in terms of how we have to enforce our immigration system that for me to simply through executive order ignore those congressional mandates would not conform with my appropriate role as President. 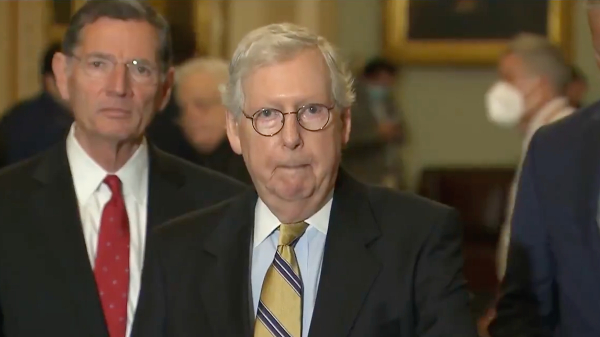 (Natural News) Data from last year’s miserable lockdowns that lasted months longer than they should have in mostly blue states is just starting to come in, and from the looks of it, we’re safe in saying that shutting down the globe’s No. 1 economy wasn’t the smartest idea in the box.

In fact, if you look at the data in sum, we can conclude, confidently, that lockdowns were:

— Harmful to our children (keeping kids out of in-person learning, for instance, in part led to more than five times more adolescent deaths via suicide than were killed by the virus);

— Wearing masks did nothing to slow the spread of the virus;

— Vaccines are NOT even close to being as effective as they are claimed to be;

— Even ‘vaccinated’ people are testing positive for the virus;

— Vaccinated people are even spreading the virus.

Sen. Mitch McConnell (R-KY) is ordering Americans to receive the dangerous and experimental COVID-19 vaccine under the threat that he will shut down public life in America with the Democrats if they do not comply.

McConnell is issuing these terror threats to implement the fledgling vaccine regime as Americans begin to resist the mass hysteria pushed about COVID-19 for over a year now.

“It never occurred to me that there would be difficulty getting Americans to get the shot,” McConnell, who himself was stricken with polio when he was a youth, said.

“These shots need to get in everybody’s arms as rapidly as possible or we´re going to be back in a situation in the fall that we don’t yearn for — that we went through last year,” McConnell added.

That sure sounds like a veiled threat: ‘Take the shot or get locked down again Americans.’

Former New York Times reporter Alex Berensen, who has been literally tracking the pandemic for more than a year and documenting all of the information — not just regime information — about the virus, ripped Republicans’ newfound interest in getting everyone vaccinated, even people who have had the disease already.

“It’s odd how the Republican establishment is rolling on vaccines just as the data show their efficacy is collapsing. From a health perspective, the argument made much more sense in May. But then not much of this has ever been about health,” he tweeted this week.

Americans don’t know enough about these vaccines yet to trust them, let alone be cajoled into getting a jab just because a politician says we must. In fact, there is some speculation that politicians railing at us to get a shot is what is driving many people to resist — because we don’t trust what we’re being told.

Then again, Republican Gov. Ron DeSantis of Florida notes there is no shortage of hypocrisy here, either.

Even though most Americans have gotten vaccinated, especially in his state, there are still jurisdictions that want to force people to wear masks — even if they’re vaccinated.

“Understand what that message is sending to people who aren’t vaccinated,” DeSantis said during a news conference this week. “It’s telling them that the vaccines don’t work. I think that’s the worst message you can send to people at this time because I think that the data has been really, really good in terms of preserving people…saving people’s lives [and] reducing mortality dramatically.”

We would beg to differ on the second part of his statement, but his comment about making vaccinated people wear masks — if the vaccines are so good — is spot-on. Why do it if the shots work?

Americans are confused about COVID and COVID vaccines because we’ve been lied to about this pandemic from the outset. McConnell isn’t helping.