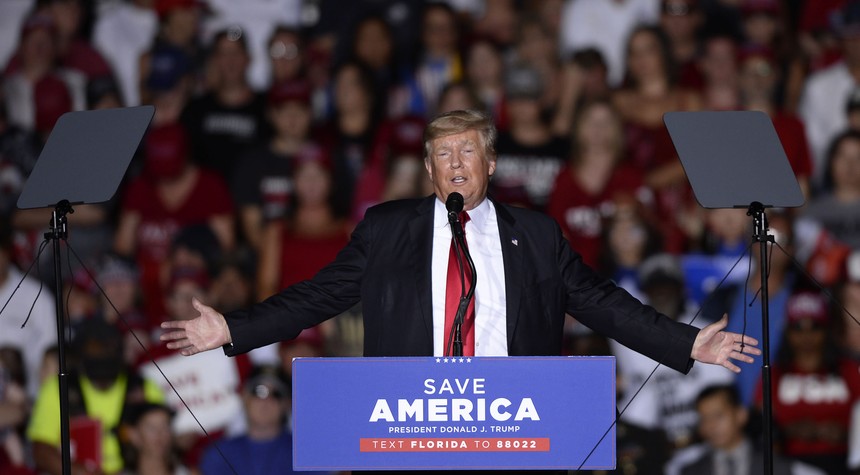 More than 5,000 enthusiastic Trump supporters showed up at the Arizona Federal Theater in Phoenix on Saturday afternoon at a “Protect Our Elections” rally featuring former President Donald Trump and several candidates looking to run for senator and governor.

They came seeking Trump’s blessing and support. Supporters came to hear Trump. The media came to belittle Trump supporters and hear the former president insist that the 2020 presidential election was riddled with fraud.

Everyone who came got pretty much what they wanted.

The Republican-controlled Maricopa County government has strongly opposed the review conducted by a company called Cyber Ninjas, whose founder has backed Trump’s claims of a stolen election.

Trump repeatedly praised the efforts of the Arizona Senate’s audit, as he has done previously in a stream of press releases issued from his private post-presidency residence in Mar-a-Lago. “You’ve created a movement all over the country,” Trump said.

The audit has split Arizona Republicans at a time when the incumbent Democratic, Sen. Mark Kelly, is a prime target of the national party and is extremely vulnerable. Trump poured a little gasoline on the fire when he went after Governor Doug Ducey for his lukewarm support of the former president’s fraud claims.

“Like it or not we are becoming a Communist county,” he said, targeting the media over its coverage of Biden and his son, Hunter, during the election.

Arizona Republican Party Chair Kelli Ward came in for some effusive praise from the former president.

“Republican Party Chairwoman — somebody that has tremendous courage,” Trump said of Ward.

“She’s really a fighter and she fights your governor who doesn’t do a damn thing,” Trump said, referring to Ducey.

Trump then attacked Ducey for not being “very popular” at rallies.

Ward, who ran for Senate unsuccessfully twice, is running for the Senate in 2022. Trump’s support would make her a formidable primary candidate in what’s shaping up to be a crowded field.

Trump repeated many of the claims made by the auditors about the results in Maricopa County.

Among them was the claim that “74,000 mail-in ballots were counted with no clear record of them being sent,” he said. “Nobody knows where the hell they are.”

But county elections officials have said the claim is rooted in misinformation.

They say the Cyber Ninjas, the Senate’s auditors, did not understand the way early ballots are tracked. The county keeps two files that must record returned ballots at different points in time. These votes are later are combined into one “voted file” document. Anyone looking at just one of those files would not get the full picture.

Trump went after those pushing transexual rights, alluding to his desire to coach a team made up entirely of trans athletes. The crowd loved it.

He even speculated about NBA superstar LeBron James transitioning and playing women’s basketball.

In case the national media was wondering, Trump is still popular, he still has the power to make or break a candidate, and he still thinks the 2020 presidential election was stolen from him.