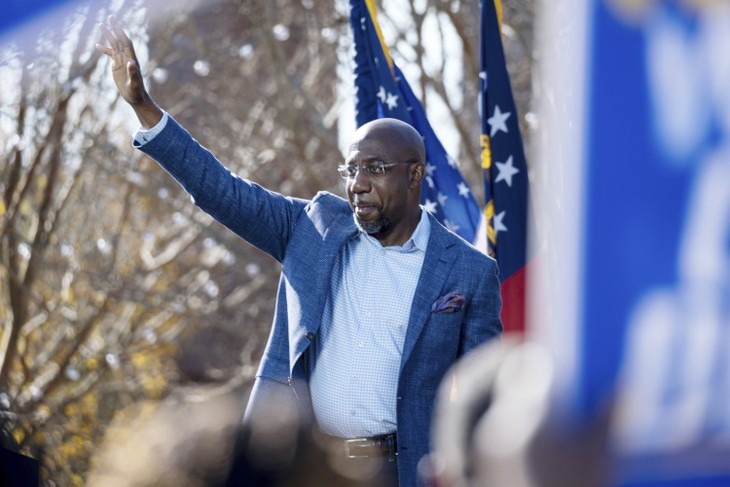 “The meaning of Easter is more transcendent than the resurrection of Jesus Christ. Whether you are Christian or not, through a commitment to helping others we are able to save ourselves,” Warnock tweeted.

The senator received swift backlash for this heretical message.

“This is a false gospel and heresy. We cannot save ourselves. The absolute truth and only meaning of Easter that matters is the literal, physical resurrection of Jesus Christ, and we must accept Him as Lord and Savior. Read Romans, ‘Reverend’ Warnock,” constitutional law attorney and former Trump lawyer Jenna Ellis responded.

Trump Lawyer Stands Up for Christianity, BLM Leader Says It’s All About Her ‘Whiteness’

Indeed, Warnock’s statement is damnable heresy, and it is particularly tragic to see such heresy from a pastor of Martin Luther King, Jr.’s church.

In the words of St. Paul, “And if Christ has not been raised, then our preaching is in vain and your faith is in vain. We are even found to be misrepresenting God, because we testified about God that he raised Christ, whom he did not raise if it is true that the dead are not raised. For if the dead are not raised, not even Christ has been raised. And if Christ has not been raised, your faith is futile and you are still in your sins. Then those also who have fallen asleep in Christ have perished. If in Christ we have hope in this life only, we are of all people most to be pitied” (I Corinthians 15:14-19).

The Resurrection of Jesus flipped the world on its head. This event transformed disciples who had rejected Jesus on Good Friday into preachers who would die gruesome deaths standing by their message. That transformation arguably sparked an astounding movement toward individual freedom, since Christianity has been the driving force behind limited government, science, universities, capitalism, the abolition of slavery, medicine, organized charities, and more.

Christianity stands or falls on the Resurrection, and so much of the modern blessings we enjoy trace back to Christianity.

Yet the worst aspect of Warnock’s tweet came in the second statement: “through a commitment to helping others we are able to save ourselves.” Non-Christians may accept this statement, but Christians certainly must reject it. In fact, Christians have been rejecting it for more than 1,000 years.

In his letter to the Ephesians, the Apostle Paul made clear that those who do not believe in Jesus Christ are spiritually “dead,” separated from the Creator of the Universe and the Source of ultimate joy by their own rebellion. The only solution to this horrible condition is the grace of God, not works that people can do to achieve salvation.

“For it is by grace you have been saved, through faith, and this is not of yourselves; it is the gift of God, not by works, lest any man should boast,” Paul wrote in Ephesians 2:8-9.

Warnock was far from the first to suggest that people could “save themselves” through good works. The heretical priest Pelagius taught that human beings are born without sin and that it was possible for people to achieve salvation through works without the grace of Jesus Christ. In 418, the Council of Carthage condemned this heresy in the strongest of terms, yet Warnock preached a form of Pelagianism on Easter.

So, where did Warnock get the idea that he should share outright heresy on Easter? The senator earned three degrees — master of divinity, master of philosophy, and doctor of philosophy — from Union Theological Seminary, the bastion of “progressive” Christian scholarship. Union has a powerful influence on the mainline Christian denominations, and it is partially responsible for the fact that mainline Christianity has long drifted to the Left, and away from the doctrine of the Resurrection.

“Warnock’s ‘Christianity’ is that of social justice moralism, wherein Jesus is a mascot for his left-wing causes and beliefs & righteousness is earned via wokeness,” Stuckey added. “It’s the same view as Ibram X Kendi: Jesus is not a savior but a ‘liberator’–and not from sin, but from ‘systems.'”

For this and other reasons, Warnock was not even the first Democrat to recently preach a form of Pelagianism. Back in 2019, then-Mayor Pete Buttigieg declared that his faith says “salvation has to do with how I make myself useful to those who have been excluded, marginalized, and cast aside and oppressed in society.”

Warnock may have intended his heretical tweet to be “inclusive” of non-Christians on Easter, but in doing so, he excluded the gospel of Christianity.

While Warnock deleted his tweet, some on the Left came to his defense, condemning Ellis for calling a spade a spade.

“Sorry, but what are your credentials to debate theology with an actual pastor??? Defending Donald Trump, the golden idol of the right, as he lied to his supporters to further a grift on them?” MSNBC host Joy Reid asked Ellis.

Another MSNBC host, Mehdi Hasan, attacked Ellis for questioning Warnock’s credentials after supporting Trump, who “declared himself ‘the Chosen one’ and the ‘second coming’ of Jesus.” Yet the former president did not declare himself the “Chosen one” or the “second coming of God.” He merely shared a statement from Wayne Allyn Root claiming that “the Jewish people in Israel love him like he’s the King of Israel. They love him like he is the second coming of God.”

Hasan attacked Ellis for “questioning the Christian credentials and beliefs of a black pastor. ‘Reverend’? Shameful.”

“Trying to make this about race simply because he’s black is shameful. What matters is his heresy, not the color of his skin,” Ellis replied.

Tyler O’Neil is the author of Making Hate Pay: The Corruption of the Southern Poverty Law Center. Follow him on Twitter at @Tyler2ONeil.

CPAC Leader Warns ‘Statues of Jesus Are Next.’ Leftists Immediately Confirm His Concerns

BLM Leader: Statues and Stained Glass of Jesus Are ‘White Supremacy,’ Must Be Torn Down

Allie Beth Stuckey
Yesterday was Easter, and most of us were spending time with our families, thinking about the ultimate sacrifice made by God and Jesus. However, progressive Christians on Twitter were as active as ever, offering their wrong opinions on how Easter and Jesus' resurrection are actually about being anti-capitalist, or anti-racist, or something. These are aspects of liberation theology, a wholly un-biblical way of looking at the Bible.