New York to Give $15K Each to Illegal Immigrants 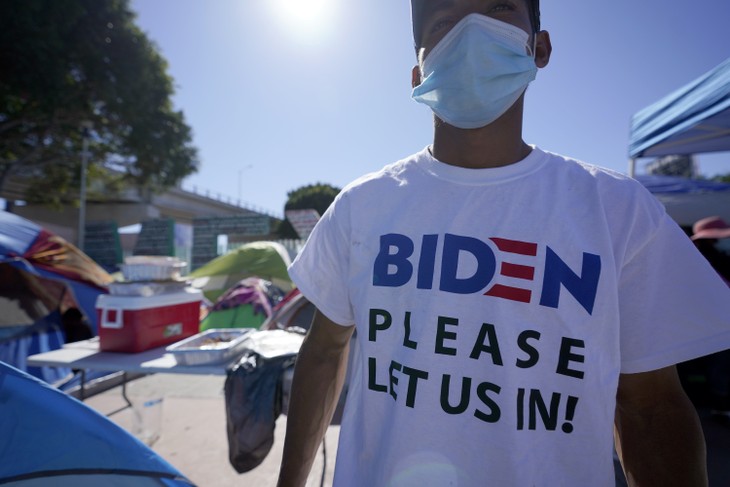 As the border crisis grows, President Grandpa’s advisors keep trying to explain away his open invitation to illegal immigrants:

But why do so many people want to come here in the first place? That’s the paradox the Dems can never quite get around: They want us to feel guilty for living in a country that’s so evil, we can’t even deal with all the people trying to get in.

Well, here’s one possible explanation for why we’re so popular. Annie Correal and Luis Ferré-Sadurní, NYT:

When the coronavirus arrived in New York City a year ago, it hit enclaves of undocumented immigrants with a fury, killing thousands and wiping out the service and construction jobs that kept many families afloat…

But after a sweeping move by lawmakers this week, New York will now offer one-time payments of up to $15,600 to undocumented immigrants who lost work during the pandemic. The effort — a $2.1 billion fund in the state budget — is by far the biggest of its kind in the country and a sign of the state’s shift toward policies championed by progressive Democrats…

Republicans instantly criticized the measure as out of touch at a time when many other New Yorkers were still struggling, while some Democrats from swing districts upstate and on Long Island said privately that a publicly funded rescue program for people who are not in the country legally could be wielded as a cudgel against them in future elections.

Yes, making New Yorkers foot the bill for people to come into the country illegally might just be a “cudgel.” Those poor Democrats!

And I love how the NYT frames this as if illegal immigrants are the only ones suffering during the pandemic. No, guys, it’s also hitting the people whose money you’re stealing.

As the NYT notes, “It is hard to quantify the number of undocumented families living in New York.” Oh really, you can’t document people who are undocumented? Weird!

Putting aside the moral and ethical problems with giving people money for coming to your country illegally… how is this even supposed to work? Logistically, I mean. How do you verify that somebody is undocumented? What do you do, ask to see ID and then just write a check to anybody who doesn’t have one?

I get the feeling we’ll be seeing scenes like this:

“Hola, señor, please to giving me the monies. I no have no papers, ay yi yi!”
“Ralph? Is that you? Take off the sombrero and fake mustache…”

But seriously, folks, this insanity is a slap in the face to immigrants who come here legally. Imagine moving to America, following the rules, and working hard to make a life for yourself here. And now you have to watch helplessly as a bunch of cheaters cut the line in front of you. They’ve all got their hands out, and the Dems are eager to fill those hands with cash. And then comes the worst part: It’s your cash.

A lot of people are learning the hard way that laws are for suckers. And lawmakers are the ones proving it.

The whole thing is nuts, but if you live in New York, I have no sympathy. You keep electing these people, and they know you’ll keep voting for them no matter what they do to you.

Remember Escape from New York? That movie depicted a world where Manhattan had been walled off and turned into an open-air federal prison. But John Carpenter was thinking too small. I say we wall off the whole state. Nobody gets out, ever. If you want to create a liberal utopia, you get to deal with the consequences while the rest of us get on with our lives.

Today on TRUNEWS, the team discusses news the latest in the ramp-up to World War III, as Chinese troops make their way to build bases in Iran. We also discuss Israel’s effort to get a war started with Iran, as they admit to attacking a surveillance ship in the Red Sea.

On Thursday, President Joe Biden announced new executive actions on gun control, trying to limit “ghost guns” and to make it easier for people to flag their own family members who shouldn’t be allowed to purchase firearms. In announcing his gun restrictions, Biden specifically addressed the Second Amendment.

While Biden insisted that none of his gun control measures impinged on the Second Amendment, he also insisted that “no amendment to the Constitution is absolute.”

“Nothing, nothing I’m about to recommend in any way impinges on the Second Amendment. They’re phony arguments suggesting that these are Second Amendment rights at stake for what we’re talking about,” he argued.

Then came the key statement: “But no amendment, no amendment to the Constitution is absolute.”

“You can’t yell ‘fire’ in a crowded movie theater. Recall the freedom of speech. From the very beginning, you couldn’t own any weapon you wanted to own. From the very beginning the Second Amendment existed, certain people weren’t allowed to have weapons,” Biden argued. “So the idea is just bizarre to suggest that some of the things we’re recommending are contrary to the Constitution. Gun violence in this country is an epidemic.”

Biden did not cite any of the Founders to support his idea that gun rights had limits from the very beginning. As Justin Haskins wrote in The Hill, the father of the Constitution, James Madison, assured Americans that the creation of a federal government would not involve the loss of this liberty.

“Notwithstanding the military establishments in the several kingdoms of Europe,” Madison wrote in Federalist 46, “which are carried as far as the public resources will bear, the governments are afraid to trust the people with arms. And it is not certain, that with this aid alone they would not be able to shake off their yokes. But were the people to possess the additional advantages of local governments chosen by themselves, who could collect the national will and direct the national force, and of officers appointed out of the militia, by these governments, and attached both to them and to the militia, it may be affirmed with the greatest assurance, that the throne of every tyranny in Europe would be speedily overturned in spite of the legions which surround it.”

“The whole point Madison was making is that armed militias and local governments are a deterrent against an authoritarian national force,” Haskins explained.

Samuel Adams said a Bill of Rights should include a guarantee that the “Constitution be never construed to authorize Congress … to prevent the people of the United States, who are peaceable citizens, from keeping their own arms.”

The key aspect of Biden’s statement has to deal with constitutional amendments overall.

Biden is laying the groundwork for carving out exceptions to key constitutional rights. It’s not just gun control: Biden supports the Obamacare contraception mandate and would remove religious freedom exemptions for Catholic nuns like the Little Sisters of the Poor. Biden also supports the Equality Act, which explicitly undermines the First Amendment’s guarantee of the free exercise of religion and the 1993 Religious Freedom Restoration Act. Biden supports H.R. 1, the Democrats’ election boondoggle that, among other things, eviscerates free speech in politics by mandating donor disclosure.

When Biden says “no amendment to the Constitution is absolute,” he isn’t just talking about the Second Amendment.

Rumble — Major 'woke' corporations like Coca Cola and Major League Baseball are attacking Georgia over its new voter ID laws. However, the same corporations are all too happy to do business with communist China. One America's Pearson Sharp explains.

Compliance Will Be Our Undoing