Alabama: Sister of ISIS jihadi tries to join ISIS, ‘willing to fight and kill Americans if it was for Allah’

James Bradley, 20, is one of two people arrested and charged with attempting and conspiring to provide material support to a designated foreign terrorist organization 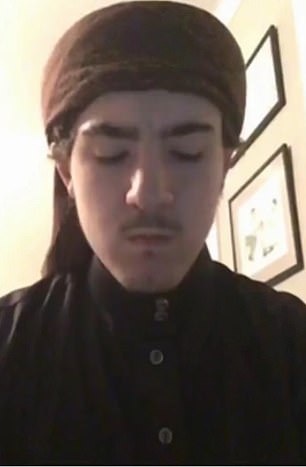 Hoda Muthana was the subject of a great deal of media attention a few years ago when she tried to return to the U.S. from the Islamic State’s crumbling caliphate and Trump prevented her from doing so. Now Hoda’s sister Arwa and her brother-in-law have tried to join the resurgent Biden-era Islamic State as well, and her sister has expressed her willingness to murder Americans for Allah. Is anyone in the clueless and corrupt FBI investigating where this family goes to mosque and what that mosque teaches, and what people in their social circle are doing? Why not? 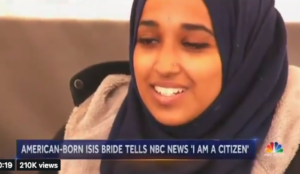 “Sister of Alabama ISIS bride Hoda Muthana arrested with husband while allegedly trying to join terrorists,” by Carol Robinson and Jeremy Gray, AL.com, April 2, 2021 (thanks to The Religion of Peace):

The 29-year-old sister of a Hoover woman who left her family to join ISIS in 2014 was arrested Wednesday in New Jersey as she and her husband prepared to board a cargo ship to go and fight for the terrorist group, prosecutors and law enforcement said Thursday.

Arwa and Bradley are charged in Manhattan federal court with attempting and conspiring to provide material support to a designated foreign terrorist organization.

The couple were arrested Wednesday in Newark, N.J. as they attempted to travel to the Middle East to fight for ISIS, the U.S. Department of Justice announced today.

The two were arrested at a seaport while attempting to travel together by cargo ship, a DOJ press release states. It was not clear Thursday night if either had attorneys.

Fearing they might not be able to travel abroad, the two planned to attack the U.S. Military Academy at West Point or another area university where Bradley knew military recruits to be training, federal prosecutors said.

Bradley suspected they might be on law enforcement’s radar, so he and Arwa planned to travel to Yemen by cargo ship to fight with the terrorist organization.

However, the person Bradley was planning the journey with was an undercover officer “and their plans to wage attacks against the United States have been thwarted,” U.S. Attorney Audrey Strauss said.

Since at least 2019, Bradley has expressed violent extremist views and a desire to support ISIS overseas or by committing a terrorist attack in the United States, according to the DOJ.

Bradley allegedly said that if he could not leave the United States because he might be on a terrorism watch list, he would do “something” in the United States instead, referring to carrying out an attack, prosecutors say.

In January 2021, Bradley allegedly told an undercover officer he knew of an university in New York State where he frequently saw Reserve Officer Training Corps (ROTC) cadets training. Bradley, prosecutors say, stated that he could use his truck in an attack, and that he and Arwa could take all of the ROTC cadets “out.”

That same month, Bradley and Arwa married in a large Islamic ceremony, according to the DOJ. The two planned to travel to the United Kingdom and then Gambia, where Muthana could work as a teacher, a court filing states.

The next day, they went by bus back to New York and made plans to travel to Asia or Africa by cargo ship, not knowing the person who was helping them facilitate the journey was an undercover officer, according to prosecutors.

Bradley allegedly paid the officer $1,000 to help them get to Yemen, the DOJ said, and the couple was told last week the cargo ship was departing on Wednesday.

They were arrested as they walked the gangplank to board the ship.

“After (Arwa) Muthana was arrested, she waived her Miranda rights and stated during an interview that she was willing to fight and kill Americans if it was for Allah,” a press release stated. “Also on March 31, 2021, in connection with a court-authorized search, the FBI seized from a bedroom previously used by Bradley what appears to be a hand-drawn image of a jihadi flag commonly used by ISIS and a hand-drawn map of the Pakistan region.”

Prior to her arrest, Arwa told the undercover officer she “wanted to travel to the Middle East so that she, too, could “fight in [the] sake of Allah,” a court filing states.

According to Arwa’s LinkedIn account and independent sources, she was a one-time student at UAB where she received a Bachelor of Science in Nuclear Medical Technology.

No one answered the door of the home on Friday when AL.com went seeking comment.