Biden Funds the Jihad While Taking Out One of Its Leaders 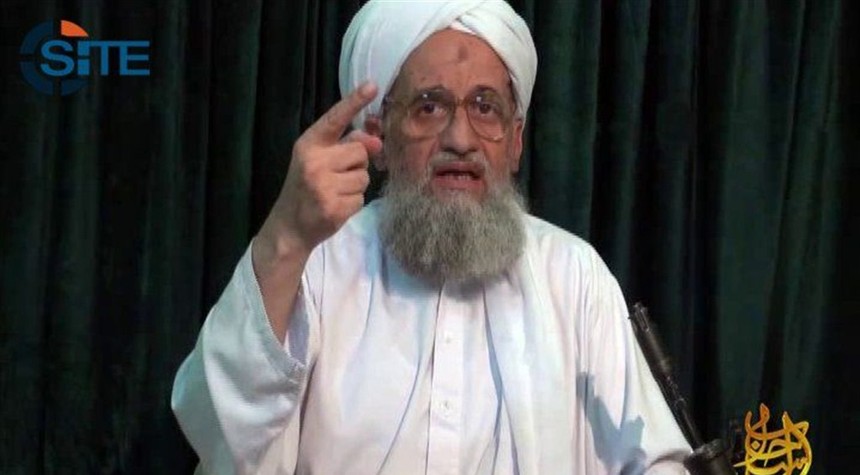 Ayman al-Zawahiri is dead, or at least that’s what Old Joe Biden tells us, and he wouldn’t lie to us, would he? Anyway, while he and his handlers are taking a victory lap over taking out the big, scary al-Qaeda honcho, the fact is that Zawahiri was first declared dead in November 2020 and has only surfaced once since then. He was 71 years old and much more a man of the past than of the present. His killing, in other words, is more a matter of PR than evidence of an effective counterterror strategy. And meanwhile, Biden’s handlers are undermining the effectiveness of what little counterterror strategy they have by sending hundreds of millions over to Zawahiri’s friends, the Taliban.

According to a Tuesday report from The Foreign Desk, the U.S. “has pledged an additional $55 million in aid to Afghanistan.” This is just the latest in a more or less non-stop money train since the Taliban took over: “Over the past fiscal year, this totals to over $1 billion to humanitarian, economic, and military assistance aid to Afghanistan.”

Biden’s foreign policy wonks would likely insist that this money was not sent to the Taliban but to other groups that are operating in the country. The Taliban may be in control, says Biden’s State Department, but there is still a massive humanitarian crisis in Afghanistan that we cannot ignore. Unfortunately for that narrative, however, the aid money that is being sent to Afghanistan is ending up in the hands of the Taliban despite all the denials and claims to the contrary. “Now,” says The Foreign Desk, “humanitarian aid to the Afghan people is lining the pockets of the Taliban at the expense of innocent Afghans and American taxpayers alike.”

There is an important reason for this: “The Taliban’s ‘Monitoring and Control Plan of NGOs’ provides them with oversight and control of movements and work of various NGOs, including the Red Cross, Doctors Without Borders, and the World Food Program.” Thus if the U.S. government sends money to any of those organizations, there is nothing that they can do to keep the Taliban from seizing the funds.

The Foreign Desk adds: “The Afghan people are desperately in need of this aid to ensure access to basic food and water, education, and health services. However, this Taliban program requires Afghan citizens and foreign NGOs to submit to the Taliban’s brutal rule in order to ensure they receive the necessary aid to survive. The U.S. cannot ensure that its humanitarian funding is being used as it was intended. More than likely, it’s only bolstering the Taliban’s repressive regime.” So the American taxpayers are funding the Taliban’s consolidation of power in Afghanistan, thanks to Old Joe Biden.

So while the administration crows over killing a septuagenarian holed up in a Kabul villa, it’s forking over hundreds of millions of taxpayer dollars to the very people who are allied with the old man’s group, share his goals, and want to bring about by force the same ideal society he envisioned.

That’s not foreign policy. That’s not a counterterrorism strategy. That’s pure madness. Or, in other words, just a normal day in the Biden administration.

Meanwhile, speaking of Old Joe Biden lying, here is Old Joe lying again on Aug. 16, 2021, as the Taliban rolled into Kabul: “We went to Afghanistan almost 20 years ago with clear goals: get those who attacked us on September 11th, 2001, and make sure al Qaeda could not use Afghanistan as a base from which to attack us again. We did that. We severely degraded al Qaeda in Afghanistan.”

Sure, he didn’t exactly say that al-Qaeda had been driven out of Afghanistan, but the international chief of al-Qaeda was living in Kabul. That’s not exactly “degraded.” Nor is there any indication that al-Qaeda cannot use Afghanistan as a base from which to attack us again.

Ultimately, the killing of Zawahiri, if it really happened, isn’t going to change anything. Al-Qaeda was never a movement built around a charismatic leader, and it won’t dissipate because of Zawahiri’s death. It will choose another leader and go on. The U.S. took out Yesterday’s Man. Biden may score some political points, but he certainly hasn’t done any serious damage to the global jihad. In fact, in the guise of sending humanitarian aid to Afghanistan, he’s still busy financing it.