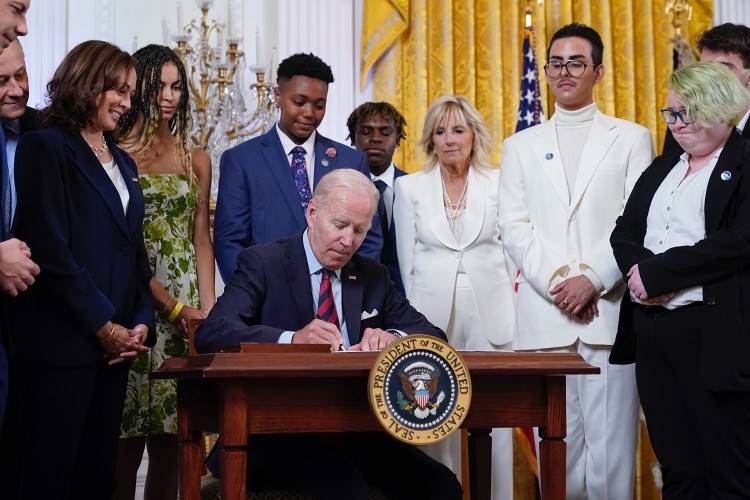 President Biden signed an executive order on Wednesday that takes direct aim at efforts by Republican legislatures and governors such as Ron DeSantis and Greg Abbott to protect youth from transgender ideology and gender-transition treatments.

It also calls for efforts to protect foster youth and prevent homelessness for transgender individuals.

The order instructs the sectary of HHS to take “steps to address the barriers and exclusionary policies” that would restrict access to various types of healthcare and treatment, namely gender-transition treatments.

Among the many provisions listed in the order is a requirement that the Secretary of Education uses the Department of Education’s authorities to “support LGBTQI+ students, their families, educators, and other school personnel targeted by harmful State and local laws and practices, and shall promote the adoption of promising policies and practices to support the safety, well-being, and rights of LGBTQI+ students.” The order states the Secretary of Education must develop and release sample policies for the well-being and academic success of supporting LGBTQI+ students within 200 days of the order.

According to the White House press release for the executive order, the measure is intended to address the more than “300 anti-LGBTQI+ laws” that have been introduced by state legislatures over the last year.

During the signing ceremony at which Biden signed the June 15 order, he took direct aim at the DeSantis administration’s move to ask state boards regulating doctors to ban Medicaid coverage for minors seeking gender transition care such as hormone therapies, puberty blockers, and gender reassignment surgeries, and at efforts by Governor Greg Abbott in Texas to urge authorities to investigate parents of transgender minors for possible child abuse if they provide their children with gender-affirming care.

“I don’t have to tell you about the ultra-MAGA agenda attacking families and our freedoms — 300 discriminatory bills introduced in states across this country,” Biden said at the White House event. “In Texas, knocking on front doors to harass and investigate parents who are raising transgender children. In Florida, going after Mickey Mouse, for God’s sake.“

“It’s ironic that the Biden administration continues to claim their policies only support ‘affirming care’ while simultaneously defending and promoting permanent, harmful, and irreversible sex-change operations for children,” Juarez said. “We have remained consistent that in Florida we must protect children and parental rights, and our Medicaid program should not be paying for medical experiments.”

As far as the executive order’s reach, the New York Post observed that it’s not “immediately clear” whether HHS will directly challenge states that are pursuing restrictions for gender-affirming healthcare for minors under the executive order.

Despite the self-serving virtue-signaling by Democrats such as Biden, the American Academy of Pediatrics continues to assert that transgender interventions are harmful to children.

“There is not a single long-term study to demonstrate the safety or efficacy of puberty blockers, cross-sex hormones, and surgeries for transgender-believing youth,” the group wrote on its website. The site goes on to state that puberty blockers may, in fact, cause mental illness and permanent physical harm, including increased risk of heart attacks, strokes, diabetes, blood clots, and various cancers.

And the American Academy of Pediatrics is not alone in its assessment.

As the organization notes on its webpage,

Many medical organizations around the world, including the Australian College of Physicians, the Royal College of General Practitioners in the United Kingdom, and the Swedish National Council for Medical Ethics have characterized these interventions in children as experimental and dangerous. World renowned Swedish psychiatrist Dr. Christopher Gillberg has said that pediatric transition is “possibly one of the greatest scandals in medical history” and called for “an immediate moratorium on the use of puberty blocker drugs because of their unknown long-term effects.”

A number of medical professionals have risked being ostracized for speaking out against the prevailing transgender ideology.

Historical data suggests that about 0.5% of children develop gender dysphoria — distress caused by a perceived incongruence between one’s biological sex and gender presentation. Reinforcing studies in the medical literature show that, as children get older, childhood-onset gender dysphoria resolves (i.e. ends) in most cases. As two authors put it in a 2016 International Review of Psychiatry article, “the conclusion from these studies is that childhood GD [gender dysphoria] is strongly associated with a lesbian, gay or bisexual outcome and that for the majority of the children (85.2%; 270 out of 317 [studied individuals]) the gender dysphoric feelings remitted around or after puberty.”

Yet instead of offering counseling, medical professionals now are commonly telling children that they may have been “born in the wrong body.” This new approach, called “gender affirmation,” makes gender dysphoria less likely to resolve, pushing children down the path toward irreversible medical and surgical interventions. If aggressive transition options are pursued early in puberty, the combination of puberty-blocking drugs, followed by cross sex hormones, will result in permanent infertility.

But these assessments from medical professionals have not been enough to convince the “woke” Left that children should not be used as pawns in the fight to advance their political agenda. Even when the World Professional Association for Transgender Health, which still espouses a mostly “woke” view of transgenderism in youth, released a draft of new guidelines suggesting that transgender teens receive more extensive mental-health screenings before receiving hormones or gender surgeries, The New York Times went out of its way to dispute the organization’s findings.