Pakistan is a leading nation in promoting Muslim victimology worldwide and advancing the “Islamophobia” agenda. The manipulative promotion of Islamic blasphemy doctrine is unceasing, while Muslim men continue to kidnap, forcibly convert and rape Christian, Hindu and Sikh girls on a routine basis.

The persecution worldwide by Muslims of both those Muslims who are deemed to be apostates and of infidels is unmatched by any other group. Still, the lie that Muslims are suffering under systemic “Islamophobia” persists. French teacher Samuel Paty was openly beheaded in France while multitudes of Muslims protested against his allegedly committing blasphemy, instead of protesting against the fact that he was beheaded. This kind of behavior would never be tolerated from any other religion but Islam, the so-called “religion of peace.” 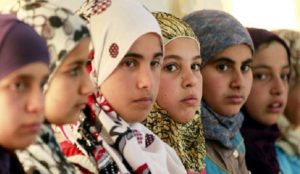 Efforts to end the abduction and forced conversion/marriage of minor Christian girls suffered a setback when the Supreme Court of Pakistan last week declined to intervene in the issue, sources said.

Supreme Court Justice Mushir Alam on Wednesday (July 14) rejected an appeal by a senior church leader for a constitutional petition to protect Christian girls from forcible conversion to Islam and marriage to Muslims.

“We had pinned our hopes on the Supreme Court for addressing this longstanding genuine grievance of the Pakistani Christians, but we are deeply disappointed and saddened by this decision,” Bishop Azad Marshall, moderator bishop of the Church of Pakistan and president of the National Council of Churches in Pakistan (NCCP), told Morning Star News. “The court has, however, stated in the order that it will take this issue up if we bring a specific case before it.”

Filed by renowned human rights lawyer Saif Ul Malook on behalf of Marshall, the petition stated that Pakistan accords a degree of permanence to the abduction and forcible conversion of Christian girls by allowing them to marry Muslims without ascertaining the pressures coming to bear on girls when they make declarations of consent before trial and high courts, nor taking into account their intellectual, emotional and social maturity.

The petition asserted that courts fail to consider whether declarations of consent are voluntary or result from threats, psychological abuse and conditioning and fear of social stigma and rebuke.

The petition also asked the court to recognize the difference between Pakistani penal laws and sharia (Islamic law), as the latter is one of the major causes behind the exploitation of Christian girls.

Marshall said the petition was filed under the Pakistani constitution’s Article 184(3), under which the Supreme Court has “original jurisdiction in matters of public importance with reference to the enforcement of any of the fundamental rights guaranteed by the Constitution of Pakistan.”

The court’s objection that the petition improperly invoked Article 184(3) by failing to address an individual grievance, Marshall said, “in our opinion, is not sustainable because the matter is not restricted to an individual case; rather, it relates to the entire Christian population in Pakistan and violation of their fundamental rights.”….