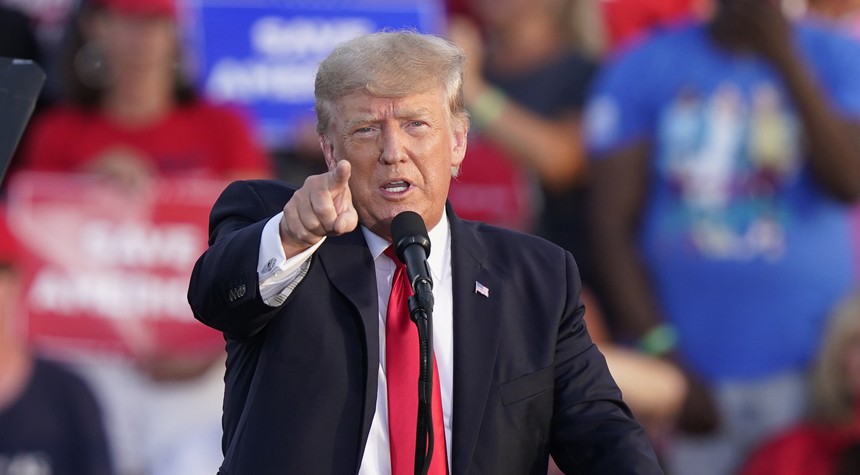 On Thursday, former President Donald Trump slammed the Biden administration’s unwillingness to condemn the communist oppression in Cuba by name. While President Joe Biden rightly supported the freedom fighters who took to the streets in Cuba, he did not mention communism or socialism in his denunciation of “Cuba’s authoritarian regime.” On Wednesday, White House Press Secretary refused to condemn communism by name, instead referring to the Cuban government’s “mismanagement.”

“The proud people of Cuba are desperate to be free from the iron boot heel of the Island’s wicked Communist Regime,” the former president wrote. “These incredible warriors for freedom risk everything to take to the streets in their quest for freedom. I stand in total solidarity with the freedom fighters in Cuba and the brave Cuban Americans who have watched their families suffer in the motherland at the hands of this heartless and brutal regime.”

Then Trump turned to the Biden administration’s fecklessness.

“The Biden Administration’s refusal to forcefully condemn Communism and the Cuban Communist Regime is a national travesty,” the former president declared. “The Biden Administration’s ludicrous suggestion that the Cubans are protesting government mismanagement—not brutal Communist oppression—is an insult to every Cuban patriot who has suffered, been imprisoned, or died in pursuit of freedom.”

“Today’s Democrat Party is so far left they can’t even take a stand against violent Communism,” Trump declared. “Many are Communists themselves!”

While many Cuban freedom fighters rally around the American flag as a symbol of freedom, many on the Left are demonizing the flag as a symbol of racism. Nikole Hannah-Jones, founder of the discredited 1619 Project, praised the Cuban communist regime for supposedly getting rid of racism. Black Lives Matter gave a statement supporting Cuba and blaming the United States for the protests. Meanwhile, the Biden administration, which rushed to accept asylum seekers on the southern border, has announced that Cuban asylum seekers would get turned away from the U.S. and resettled in a third country.

Some of Biden’s allies have praised Cuba.

“Cuba has solved some very important problems,” Sen. Bernie Sanders (I-Vt.), who supported Biden after he lost the Democratic primary, said in 1989. “I did not see a hungry child. I did not see any homeless people. Cuba today not only has free health care but very high-quality health care.”

During the 2020 campaign, Sanders said, “When Fidel Castro came into office, you know what he did? He had a massive literacy program. Is that a bad thing, even though Fidel Castro did it?” He also suggested that the Cuban people didn’t remove Castro from power because “he educated their kids, gave them health care, totally transformed the society, you know?” In reality, the counter-revolution against Castro failed because the Cuban dictator silenced dissidents via firing squad.

Biden partially won the 2020 Democratic primary because Democrats feared that Sanders would win, so they coalesced around the more “moderate” alternative. Yet Biden lurched to the Left during the campaign, reversing his decades-long support for the Hyde Amendment, echoing Sanders’ rhetoric on universal health care — even though he did not support the Medicare for All proposal — and supporting more big-government social programs.

Trump lamented that he does not get another chance to implement his strategic vision for freedom in the Western Hemisphere.

“As President, I advanced a strategic vision in which the people of Cuba, Venezuela, and Nicaragua would be free, and that the Western Hemisphere would be the first fully free hemisphere in all of human history,” Trump wrote. “The Biden Administration is squandering a historic opportunity to stand for freedom and human rights in our home region. The Biden Administration is betraying the freedom-loving people of Cuba. I fought for Cuba, they didn’t.”

Former President Barack Obama took steps to normalize relations with Cuba, restoring diplomatic ties and expanding trade, but Trump reversed course, hitting the communist regime with new sanctions. Biden pledged to ease the sanctions, but the protests may lead him to reconsider. Meanwhile, some Democrats are demanding Biden lift the sanctions.

Trump shares none of the Biden administration’s squeamishness when it comes to condemning communism.