“MY DADDY HAS A GUN, AND MY MOM DOES TOO!”-NEW CHILDREN’S BOOK FROM ROB PINCUS

“Storing Guns in the Family Unit”

Rob Pincus, Executive Vice President of Second Amendment Organization and Executive Director of Personal Defense Network, spoke about the importance of influencing American Culture to improve the image of guns and gun owners.
Rob Stressed the importance of avoiding rhetoric, hyperbole and talking points that are nonsensical when talking about guns and gun rights if our real aim is to influence people who have not already made their mind up on these issues or if we hope to ever be able to change the mindset of a “anti-gunner”.

Rob also talked about how vital it is to stop playing into the Divisiveness of American Politics & Media Coverage by dismissing “the left” or “liberals” as a group, as if everyone in those groups are anti-gun. Virginia Governor Sets a Trap for Lobby Day,
20 January 2020
Second Amendment supporters face a daunting challenge in Virginia for Lobby day, at the Virginia Capitol in Richmond, on 20 January 2020.  Those who wish to disarm Virginians have created a trap to frame Second Amendment Supporters as violent white supremacists, going to Richmond to destroy duly elected government.
SEE: https://www.ammoland.com/2020/01/virginia-governor-sets-a-trap-for-lobby-day-20-january-2020/#axzz6BOpQ94VQ

“The governor claims in the order, that “credible intelligence” indicates that “tens of thousands of advocates plan to converge on Capitol Square,” for events culminating on January 20 (a scheduled rights rally and Lobby Day, organized by the Virginia Citizens Defense League (VCDL), which has been held annually, without incident, for almost 2 decades) and that “Available information suggests that a substantial number of these demonstrators are expected to come from outside the Commonwealth, may be armed, and have as their purpose not peaceful assembly but violence, rioting, and insurrection.”” 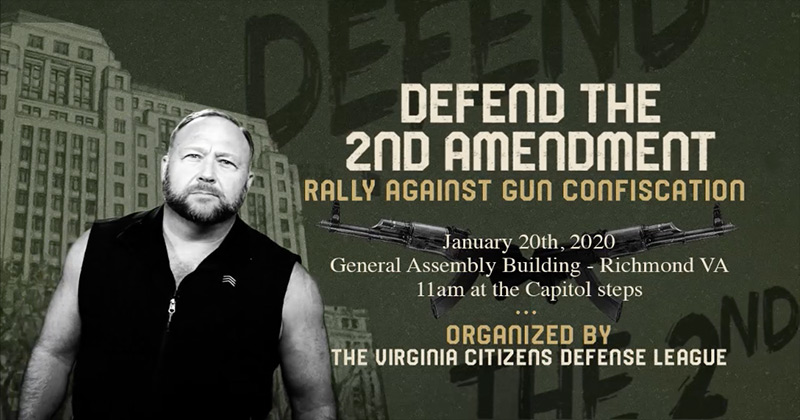 SHOWDOWN IN VIRGINIA – AN URGENT MESSAGE FROM ALEX JONES

BY ALEX JONES
SEE: https://www.infowars.com/virginia-showdown-an-urgent-message-from-alex-jones/;
AND: https://www.infowars.com/is-the-virginia-2nd-amendment-rally-a-political-powder-keg/
republished below in full unedited for informational, educational and research purposes:
The battle for the Republic intensifies as the state of Virginia declares a National Emergency in preparation for the Rally Against Gun Confiscation.
First and Second Amendment rights advocates are gathering from all across the country to peaceably protest Democrat lawmakers’ sweeping gun control measures that could very well create a constitutional crisis and spark the second American Civil War.
According to the mainstream media, Antifa, neo-Nazis and political “extremists” are set to join forces in a symbolic middle finger to the government of Virginia during a massive pro-Second Amendment rally set to take place in Richmond on Monday.
The Democrat-majority state Senate passed legislation on Thursday “that would restrict monthly gun purchases, expand background checks on firearms, and allow localities to ban guns in certain designated areas.”
After Democrats gained a majority in the state’s General Assembly in November, over 100 counties declared themselves Second Amendment sanctuaries.
Additionally, in response to the upcoming Virginia Citizens Defense League pro-gun rally on Monday, Virginia Governor Ralph Northam passed an emergency decree banning firearms from the state Capitol grounds.
While the move is clearly unconstitutional, is Northam a “conspiracy theorist” for fearing the possibility of chaos erupting?
Because, according to George Soros’ Media Matters, Alex Jones is somehow wrong for warning Americans about the possibility of violence or a false flag operation being staged at the rally.
“As Virginia gun rally approaches, Alex Jones and his Infowars outlet hype prospect of violence,” their headline reads, setting the stage for Jones to be blamed if anything happens.
Governor Northam also held a press conference on Wednesday where he claimed to have “credible intelligence from our law enforcement agencies that there are groups with malicious plans for the rally that is planned for Monday.”
On Thursday, three individuals associated with an alleged “racist and anti-Semitic group” called “the Base” were arrested by the FBI.
The group was said to be on its way to attend the rally when they were arrested on federal gun charges and for harboring a Canadian citizen who was in the country illegally.
The image of neo-Nazis attending the rally is meant to dismiss patriotic attendees as racists via guilt by association.
On top of that, a Richmond, Virginia-based Antifa group is set to make an unprecedented declaration of solidarity with conservatives by marching alongside them in defense of the Second Amendment.
However, the history of violence associated with Antifa, specifically when pro-Trump groups are present, cannot be ignored.
Will the group mesh with the pro-gun demonstrators or will they clash and possibly turn their weapons on each other?
On the other hand, could Governor Northam send in the National Guard as Virginia Democrat Donald McEachin suggested last month?
No matter the outcome, Alex Jones will be joining fellow American patriots as they stand up to the unconstitutional demands of Democrat politicians.
Watch more Infowars content on the upcoming Virginia rally below:
Listen in their own words as leftists vow to make you a disarmed slave. It is their wet dream that they make you a victim.