Orbán has long declared his dedication to protecting his Christian country against mass migration and Islamization. In 2015, he said that the swarm of migrants flowing into Europe looked more “like an army.”

Orbán has been rebuked for saying that Muslim migrants must be blocked “to keep Europe Christian,” yet given the aggressive and expansionary nature of Islam and its core supremacism, Orbán is right. The determined leader now has a renewed fight with the globalist leadership in the EU on his hands. They have already referred to opponents of their agenda as “anti-democratic, or anti-rule of law.” Orbán has “explicitly invoked the mass migration issue” as the basis of his opposition to EU policy, and he is getting support from Poland and Slovenia.

Given the recent jihad attacks in France and Austria, and the new resolve to battle “political Islam,” with Austria aiming to “ban political Islam” and “shut down jihadi mosques,” Orbán will likely get further support against the EU’s pressure to force open borders, particularly from Austria and its traditional allies Slovakia and the Czech Republic.

“Hungary: EU is Trying to Punish Countries That Control Their Own Borders,” by Oliver JJ Jane, Breitbart, November 18, 2020:

Hungary’s leadership is standing by its decision to block the whole seven-year budget for the European Union over the inclusion of new powers which would, they claim, allow the political persecution of member states that don’t follow the Brussels globalist playbook on matters like mass migration.

The Hungarian and Polish governments used their veto powers to block the seven-year Multiannual Financial Framework (MFF) — in other words, the EU’s budget — on Monday, having failed to prevent new clauses and rules being inserted at earlier stages of the negotiation process. While the comparatively small central European nations lacked the political clout to prevent the new rules, because they are tacked on to the overall budget which must be adopted by all member states unilaterally, the bloc essentially forced Hungary and Poland into a showdown where their choices were to accept the new controls or stop Europe’s spending altogether.

Hungary’s Viktor Orban was bullish on Wednesday when he said Europe was attempting to use a “political whip” to punish member states that refuse dto fall in line. The Associated Press reported further remarks where Prime Minister Orban explicitly invoked the mass migration issue — a longstanding area of disagreement between the EU, which has attempted to institute a mandatory migrant redistribution programme, and its conservatively minded members — as being at the heart of the dispute, and Europe’s desire to turn the screws on some members.

Orban said: “In Brussels today, they only view countries which let migrants in as those governed by the rule of law… Once this proposal gets adopted, there will be no more obstacles to tying member states’ share of common funds to supporting migration and us(ing) financial means to blackmail countries which oppose migration.”

Hungary’s justice minister — on whose brief much of these debates fall — accused Brussels of “double standards” in its discussions of the kinds of “rule of law” claims made as a justification of these rule changes. Pointing out that many European countries have legal peculiarities or far-from-perfect standards for judicial independence, Justice Minister Judit Varga said on Wednesday that the phrase rule of law was only invoked in reference to Hungary.

Earlier in the week, Varga had said that Europe’s wealthy nations, which don’t receive EU funding anyway, would be able to politically blackmail the poorer members, an infringement of sovereignty. Ultimately, she said, Hungary was under attack because the “liberal mainstream” couldn’t accept the fact an extremely popular conservative government controlled a nation in the heart of Europe….

When Leftists Call For ‘Unity,’ They Mean ‘Submission’ – and They’re Not Getting It From Me

After years of calling conservatives "racists," "Nazis" and "white supremacists," Democrats now say they want "unity" - while making lists of Trump supporters to be "held accountable." 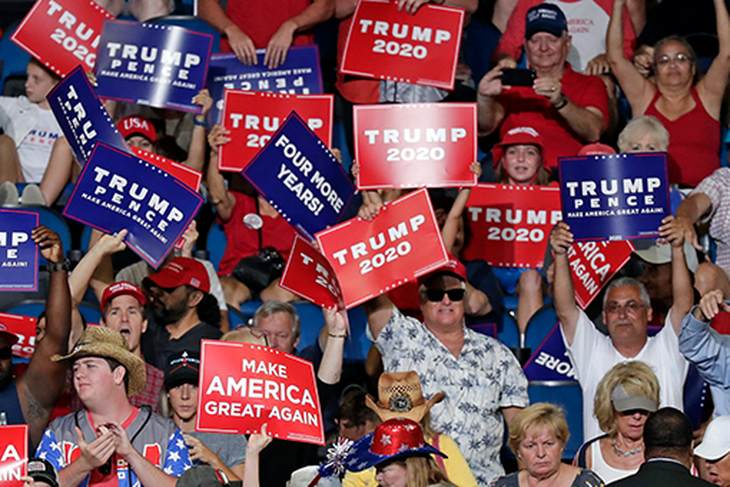 The tech firm Eventbrite, which had been used to organize rallies supporting President Donald Trump, has canceled the events on its website because they violate its “Terms of Service.” The company said the rallies convey “harmful misinformation.”

All organizers have been ordered to report to 1984’s Room 101 to get their minds straight. That actually isn’t true, but it’s starting to feel true. It’s a rueful acknowledgment of the totalitarian bent of the Leftist tech giants who have taken it upon themselves to determine what information shall be disseminated.

Three large rallies and events are expected in Washington, D.C., on Saturday. There’s the Million MAGA March, along with Stop the Steal and the March for Trump event organized by Women for Trump. At least two used Eventbrite’s platform to invite people and those two were canceled by the online platform. Attempts to view the events are met with a gee-whiz-we’ve-got-nothing-to-show-you-announcement.

The leader of Women for Trump, Amy Kremer, says in a series of tweets that her March for Trump rally is still on and claims that Facebook, Mailchimp, and Eventbrite all tried to shut her down.

@Eventbrite just shut down our event & emailed everyone that it was canceled. THE MARCH IS NOT CANCELED. First it @Facebook. Then it was @Mailchimp. Now #Eventbrite

We will #MarchForTrump in Washington, DC this weekend, Saturday, Nov 14th 12PM, Freedom Plaza
Tell everyone you know and let’s fill the streets. We cannot let them shut us down. It is time that WE THE PEOPLE rise up and have our voices heard.

We encourage our organizers to express their views and gather for a chosen purpose as long as it’s done in a way that doesn’t violate our Terms of Service. We do not permit events, content, or creators that share potentially harmful misinformation. In this instance, we have determined that your event violates our Community Guidelines and is therefore not permitted on the Eventbrite platform. As a result, your event listing has been removed and any paid orders have been refunded.

The letter also said that if they did anything like this again, they may get tossed off the platform forever.

While you may continue to use Eventbrite for other events, please note that repeated or severe violations of our Guidelines may result in your account being terminated.

Newsweek reports that media outlets have determined Joe Biden to be the winner of the presidential election and “Trump has refused to concede.” Of course, the president is litigating the preliminary results of different states’ elections and is contesting the results, as he has a right and obligation to his 70 million-plus voters to do. Newsweek states that the president and his lawyers have “failed to provide any evidence for [his voter fraud] allegation.” Reams of paper with legal arguments, proof, and affidavits filed under penalty of perjury have been proffered in courtrooms around the country outlining the proof for such claims.  Not only does Newsweek predict elections, but it also apparently predicts court cases.

Indeed, Trump may lose his appeals, but he also may not. Newsweek thinks it knows best, however.

Eventbrite has canceled events and customers it deems unfit for its platform before. The pro-America, anti-terror group, run by terror victim Brigitte Gabriel, was canceled and thrown off Eventbrite, when the notorious anti-conservative group, The Southern Poverty Law Center,  claimed that ACT for America “promoted hate.”

Big Tech’s cancelation of right-of-center groups and ideas continues apace on Twitter, Facebook, and other platforms. Platforms like Parler, MeWe, and Minds.com are exploding in growth because they promise not to censor legal content.

Victoria Taft is the host of “The Adult in the Room Podcast With Victoria Taft” where you can hear her series on “Antifa Versus Mike Strickland.” Find it at your favorite podcast outlets. Follow her on Facebook,  Twitter and Parler @VictoriaTaft

Oregon Grants COVID Relief Funds to Strippers, Lap Dancers, Hookers ‘Who Are Falling Through the Cracks’

Macron CRACKS DOWN on Islam in France in a MASSIVE TURN to the Nationalist Populist Right!!!

Macron CRACKS DOWN on Islam in France in a MASSIVE TURN to the Nationalist Populist Right! I can’t believe I’m making this video, but here we go! In this video, we’re going to look at the latest terrorist attacks in France, how those attacks have turned the otherwise globalist hero Emmanuel Macron into a full-blown nationalist-populist, and why we can expect Macron to continue to turn even further to the right on Islam in France, you are not going to want to miss this!

OUT WITH THE ISLAMOFASCISTS!

PRESIDENT TRUMP IS AGAIN NOMINATED AT THE REPUBLICAN CONVENTION 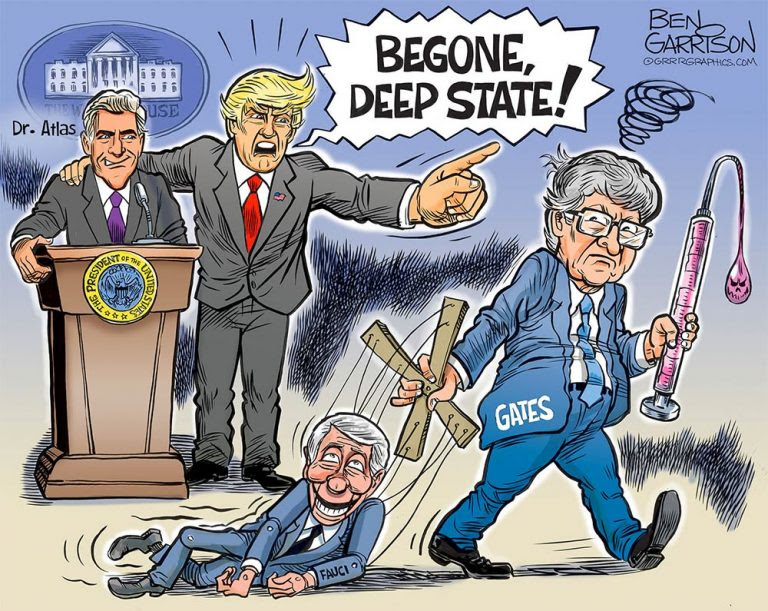 The latest Wave of Leftist Censorship Across Social Media Will Only INCREASE the Rise in Right-Wing Populism! In this video, we’re going to take a look at some of the victims in Big Tech’s latest round of cancel culture, and we’re going to find why it’s all for naught; the internet is guaranteeing that voices will be heard, and they’re more conservative than ever! You’re not going to want to miss this!