Namouz was operating according to the principle that non-Muslims owe the jizya to Muslims (cf. Qur’an 9:29) in using taxpayer funds he had been given in order to fund the Islamic State.

Note also that Namouz is a convicted rapist. Was he taking advantage of the Qur’an’s implication that uncovered women may lawfully be molested (33:59)?

As this unrepentant jihadist warrior heads off to jail, he’s likely already geared up to continue his jihadist mission from jail. UK prisons were long ago dubbed “jihadi training camps.” 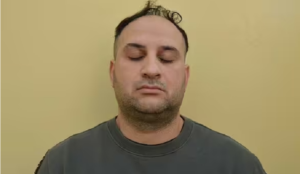 A former pub landlord who used Government Covid loans to help send £25k to Islamic State terrorists shouted “May Allah destroy you” as he was jailed for 12 years.

Tarek Namouz, 43, sent the money to a school friend fighting in Syria after being paid the loans by his local council.

The Covid “bounceback” loans were launched by then-Chancellor Rishi Sunak to help small British businesses stay afloat during the pandemic. Namouz, who is a convicted rapist and ran a barber shop in west London, which he lived above, sent the money to his contact Yahya Ahmed Alia between November 2020 and May 2021.

He denied this but was convicted, after a trial last month of eight counts of providing money for terrorism and two counts of possessing information useful for terrorism.

After his sentencing at Kingston Crown Court today, Namouz thanked the judge and then announced to the court: “May Allah destroy you, may Allah destroy you. We will meet on judgment day. You are a Catholic and you will end up in hell.”

The court heard Namouz, who was born in Syria and came to the UK aged 14, was on licence from a ten-year sentence for raping a woman in 2014 when he was the landlord of a pub in Finsbury Park. He was released in September 2019 and opened Boss Crew Barbers in Olympia.

The court heard Namouz claimed Covid loans from Hammersmith and Fulham Council in 2021, which he sent along with other cash.

Corey Saylor, the Director of Research and Advocacy at the Hamas-linked Council on American-Islamic Relations (CAIR), has given us his reaction to the distribution of racist flyers in North Kingstown, Rhode Island.

So this is a group that has become more active in the last few years. They recently had a march in Maine where they held up anti-Somali flyers.

It is unusual for CAIR ever to provide any information in its appearances on the news, but based on this clue about a demonstration in Maine, we see that Saylor is talking about the Nationalist Social Club 131.

The NSC 131 is not acting against Muslims. Whatever objections these Nazis have to Somalis are due to the fact that the Somalis are black.

It should be a member of the Jewish community who makes a statement about the flyers, not CAIR.

The truth is that CAIR has more in common with the NSC 131 on the subject of Jews than it would have us believe. As a group, CAIR stands with Jew-haters including Zarha Billoo, Ilhan Omar, Rashida Tlaib, the BDS movement, and Hamas.

Of course, CAIR would counter by saying that it is criticizing Israel and Zionists, not all Jews. But this fails to convince. After all, when is CAIR going to condemn an anti-Semitic imam who is reciting the genocidal passages from the Hadith (such as Sahih Muslim 6985)?

Apparently, CAIR will never condemn Louis Farrakhan for his incitement against the Jews. Even when presented with a golden opportunity.

If Corey Saylor is implying that the NSC 131 is cowardly, he should consider how vulnerable CAIR is to accusations of cowardice.

For example, CAIR never said anything after it kicked off a series of events that resulted in an underage girl receiving rape threats.

When the entire town of Dearborn, Michigan, including local news camera crews, were coming down on one man for a Facebook post, CAIR thought that was appropriate, and never said anything against it.

CAIR defamed a sitting judge on TV in order to overturn a legal decision. CAIR then had the TV station pursue the judge to her new job and broadcast CAIR’s demand that she be fired.

CAIR will have a chance to test its mettle in court soon because it is being sued for defamation in New Jersey. Not exactly a badge of courage.

Is bravery the reason CAIR has yet to issue a condemnation of a newly converted Muslim who attacked police officers on New Year’s Eve? Because when a similar thing happened again a few days later, CAIR issued a statement in support of the assailant. Is that bravery or just plain nerve?

CAIR has more in common with the NSC 131 than lack of courage. Like that small band of Nazis, CAIR strews its messages all over the country; the only difference is that CAIR does it on TV. All of CAIR’s TV appearances are self-promotion. CAIR litters the nation’s airwaves with its statements about things in the news that have nothing to do with its stated mission.

And while the NSC 131 hates Jews and blacks, CAIR hates white people. CAIR uses its media access to attack individual people several times each month. There are a hundred examples from the last five years. The targets are almost all white.

Congratulations on confirming the warnings of the NSC 131.

Corey Saylor says the neighborhood would reject the NSC131 if they knew what the Nazi group was about. But that is also true of CAIR. The public should reject CAIR for the incompetent, racist, terror-tied anti-American group that it is. 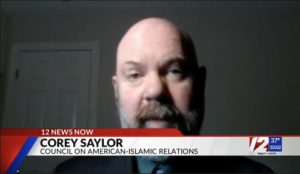 Captain John Urban said the department received an email on Tuesday from a resident on Wickham Road, who wrote that he found a flyer from a neo-Nazi group called Nationalist Social Club 131 inside a “plastic ziplock bag with a rock, presumably thrown from a car to recruit additional members.”

The man added that the discovery in his driveway was “unacceptable” and that he doesn’t want the town to be “threatened by such groups.”

The Southern Poverty Law Center, a nonprofit civil rights group, lists the Nationalist Social Club as a hate group on its website. Photos of the flyer obtained by Target 12 described the group as “pro-white” and said the group seeks men of “European descent in the New England area.”

The Anti-Defamation League said the neo-Nazi group “espouses racism and antisemitism,” and in 2021 “disbanded all chapters outside of the New England area and are now focused solely on a six-state geographic area that includes Connecticut, Maine, Massachusetts, New Hampshire, Rhode Island and Vermont.”…

Even blue cities have been overloaded. 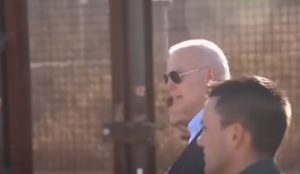 Biden made his ritual visit to an El Paso scrubbed of illegal aliens and a detention center scrubbed of detainees. The entire Potemkin village setup was meant to kick off Biden’s plan to get rid of Title 42 and ram open the border all the way to flood the nation with illegal aliens even more than it already is.

How bad is it now?

“Using even a very conservative estimate of unknown got aways, Biden has released or allowed more illegals into the United States in the last 100 days than the whole population of Montana. An entire storied American state now exceeded by just 3+ months of foreign lawbreakers,” Stephen Miller tweeted.

Even blue cities have been overloaded and are begging for help. But the bigger plan is to eliminate red states entirely.

The Biden regime claims that they can’t do anything about it. Sure, they can’t.

Biden’s visit was scheduled at a time when border crossings had already dropped drastically in El Paso.