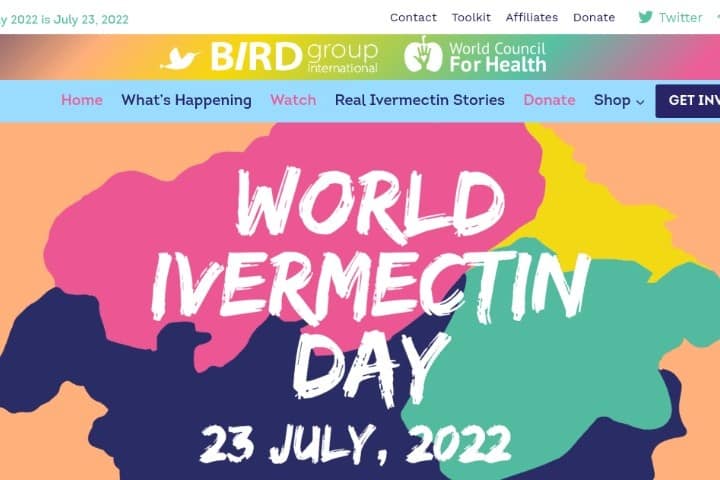 The British Ivermectin Recommendation Development (BIRD) group and the World Council for Health (WCH) will be holding the Second World Ivermectin Day on Saturday, July 23. Established one year ago, the event is dedicated to sharing the evidence-based message that the safe and easily accessible drug ivermectin is highly effective when used early against Covid-19 and could put the pandemic behind us.

“We have an incredibly positive and uplifting message to share; Ivermectin treats and prevents Covid and it is the key to unlocking the never-ending cycle of pandemic peaks and personal restrictions and will help restart economies,” said Dr. Tess Lawrie, U.K.-based founder of World Ivermectin Day, when establishing the event.

Ivermectin is a decades-old antiparasitic and antiviral drug. It was first approved for human use in 1987. In 2015, scientists William Campbell and Satoshi Mura were awarded the Nobel Prize for their discovery of ivermectin, which has significantly reduced deaths from tropical infections.

After being administered a couple of million times to vulnerable populations, including children and pregnant women, the drug took center stage in April 2020, when Australian researchers from Monash University found that just a single dose could stop SARS-CoV-2 from growing in cell culture.

“We found that even a single dose could essentially remove all viral RNA by 48 hours and that even at 24 hours there was a really significant reduction in it,” Monash Biomedicine Discovery Institute’s Dr. Kylie Wagstaff revealed.

All subsequent real-world and clinical studies showed the drug’s outstanding efficacy against Covid.

Since March 1, 2020, some front-line ICU and ER doctors began using Ivermectin in combination with HCQ in early treatment protocols…. More than 20 randomized clinical trials (RCT) have confirmed its miraculous efficacy against COVID for both inpatient and outpatient treatment. Six of seven meta-analyses of IVM treatment RCTs completed in 2021 found notable reduction in COVID-19 mortality.

The favorable medical data on ivermectin as a Covid early treatment keeps on coming.

According to WCH, to date, there are 174 ivermectin Covid-19 studies, of which 121 are peer-reviewed, and 88 compare treatment and control groups.

According to the meta-analysis of the ivermectin studies, the results speak for themselves:

“The evidence supporting ivermectin for COVID-19 far exceeds the typical amount of evidence used for the approval of treatments,” note the scientists. That means that typically, regulatory bodies accept far lower efficacy rates for new drugs to sign off on their approval and recommendation. (Think Covid vaccines for children.)

What makes ivermectin so effective against Covid?

Owing to its mechanism of action, ivermectin stops viral replication, meaning the virus can not reproduce and thus hurt the host. Besides that, it performs other important functions, including the following:

Despite the drug having a stellar safety profile and more promising efficacy characteristics against Covid, U.S. medical authorities advise against using it as a Covid treatment. That recommendation likely interfered with physicians’ ability to practice medicine from a patient-based perspective by directing them, their patients, and the public not to use ivermectin, according to the latest lawsuit against the U.S. Food and Drug Administration (FDA).

The FDA led a deceptive smear campaign against ivermectin, depicting it as a “horse dewormer” not suitable for humans.

On its website, America’s top regulatory agency strongly warns against using ivermectin, falsely claiming there’s no evidence that it works or that it is effective:

The FDA has not authorized or approved ivermectin for the treatment or prevention of COVID-19 in people or animals. Ivermectin has not been shown to be safe or effective for these indications.

In the best traditions of pandemic fear-porn-style messaging, the agency adds that those overdosing on ivermectin may experience a wide range of side effects, from nausea and vomiting, to “seizures, coma, and even death.”

The U.S. Centers for Disease Control and Prevention (CDC) seems to be less dramatic in its assessment of ivermectin.

While admitting the drug is “generally safe and well tolerated” if used as prescribed, the CDC recommends against using it as Covid treatment. Interestingly, the agency advises all foreign refugees to take ivermectin for at least five days before coming to America, without specifying the purpose.

Speaking with The New American on several occasions, the president and co-founder of FLCCC, Dr. Pierre Kory (see here and here) described how the ongoing war against ivermectin and other early treatments has caused and continues to cause large numbers of unnecessary deaths. The core issue is that the federal government is acting under regulatory capture and serving Big Pharma. Until the agencies are restructured, the advice that they produce will not be in the interests of the patients, said Kory.

Speaking recently with The New American, Dr. Tess Lawrie suggested people take more responsibility for their own health and well-being.

The online streaming of the World Ivermectin Day starts on Friday at 7:00 PM Eastern Time.

“You can help us spread critical awareness about Ivermectin this July 23 by joining or hosting an event and sharing information on social media,” note the organizers.