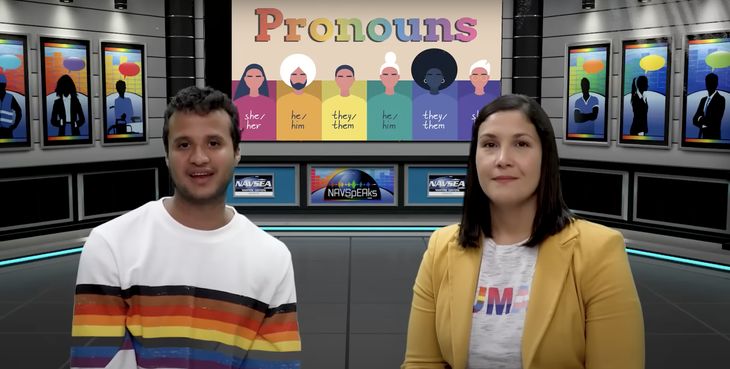 Russia and the U.S. are edging toward open conflict as the war in Ukraine drags on and the U.S. gets deeper into a conflict that’s becoming a bloody stalemate.

But where the Russian navy is probably conducting war games and performing combat drills to prepare for the possibility of war, U.S. sailors are engaged in a different kind of training. They’re learning the crucial war-fighting skill of using the right pronoun onboard so as to create a “safe space” for everyone.

The official training video is meant to emphasize “the importance of using correct pronouns as well as polite etiquette when you may not be sure of someone’s pronouns,” according to the Navy, which late last month published the video online. The Defense Visual Information Distribution Service touts the video as an “official U.S. Navy video” posted by Air Force staff sergeant John Vannucci.

Are you getting this? If you’re not sure of someone’s pronouns, you can’t ask them what they are. Why? Probably so that you can be chastised and properly upbraided for not knowing just by looking at them that they’re not “cis-gender” or (never use this word) “normal.”

The nearly four-minute Navy video emphasizes how members can create “a safe space” for their colleagues by using “inclusive language” that signals they are “allies” who “accept everybody.” Service members must take these steps to ensure they do not “misgender someone.” The Navy also warns staff against pressuring an individual to disclose his or her gender pronouns, saying that colleagues may still be in “the process of discovery” and not yet ready to provide this information.

What if I don’t want to be an “ally”? What if I’d rather mind my own business and address someone as they appear?

Why would anyone in the Navy be forced to memorize a swollen list of instructions on how to address a non-binary, or gender-whatever so as not to “offend” them? If you don’t want to be offended, write your gender on a slip of paper and pin it to your damn uniform — just like your mommy did the first day of school — rather than forcing grown men and women to play a silly, stupid name game that’s no more than an exercise in mind-boggling stupidity.

It shouldn’t be this hard. In all of human history, no one has ever needed a set of instructions on how to “identify” someone’s gender. The “offense” — if any — is in asking perfectly rational and sane people to debase themselves by pretending that this matters to anyone but a small group of people who demand attention because they don’t “feel” male or female.

The woke will get us all killed yet.