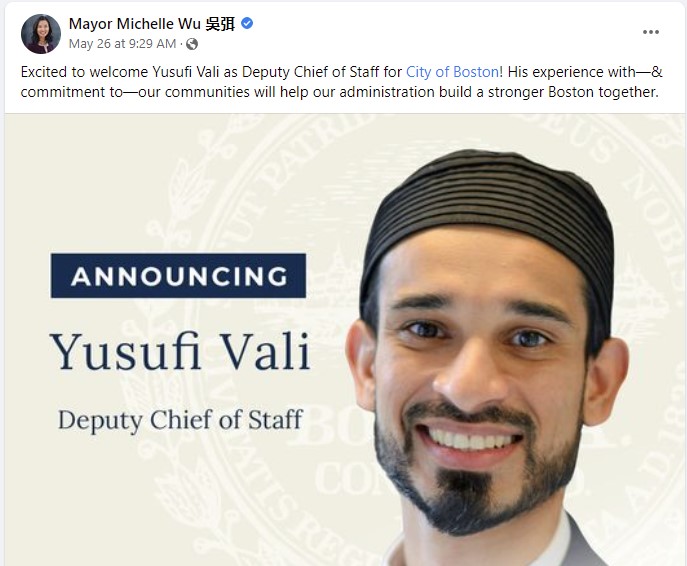 The Islamic Society of Boston was founded by al-Qaeda financier Abrurrahman Alamoudi and had the Hitler-admiring Jew-hater Sheikh Yusuf al-Qaradawi on its Board. It has recommended (in accord with Qur’an 4:34) that men beat their wives. Convicted jihadis Tarek Mehanna and Aafia Siddiqui went there. So did Ahmad Abousamra, the Islamic State’s “social media guru.” Oh, and the Boston Marathon jihad bombers, the Tsarnaev brothers.

Ironically, Michelle Wu wouldn’t dream of appointing someone who had spoken critically of jihad violence and Sharia oppression as deputy chief of staff. But this is fine.

In May, Boston’s progressivist Mayor, Michelle Wu, appointed Yusufi Vali as her Deputy Chief of Staff. Vali is the former head of the Islamic Society of Boston (ISB), an institution once considered to be among the most radical mosques on the East Coast. Vali’s appointment appears to be yet another case of a graduate of Boston’s Islamist institutions finding a powerful foothold in Massachusetts politics.

Vali certainly has some explaining to do. He is a former trustee of the Boston branch of the Muslim American Society (MAS), one of America’s most notorious Islamist institutions and a designated terrorist organization in the United Arab Emirates.

In 2008, federal prosecutors wrote that “MAS was founded as the overt arm of the Muslim Brotherhood in America.” Speakers at MAS conference have often openly glorified terrorism. In 2019, the Philadelphia branch of MAS made national headlines after it ran an event in which children sang about torturing and beheading Jews.

MAS’s Boston branch oversaw the management of ISB’s flagship mosque for many years, where Vali became executive director. Before Vali’s time, early trustees of the ISB’s first mosque, over the river in Cambridge, included Yusuf Al Qaradawi, the infamously-extreme spiritual leader of the Muslim Brotherhood and admirer of Adolf Hitler; as well as Abdulrahman Alamoudi, an Al Qaeda fundraiser who was jailed in 2004 for conspiring with the Libyan regime to assassinate the Saudi Crown Prince….