The Left Will Devour Itself: ELCA Calls for Resignation of Trans Bishop—But Not for the Reason You Think 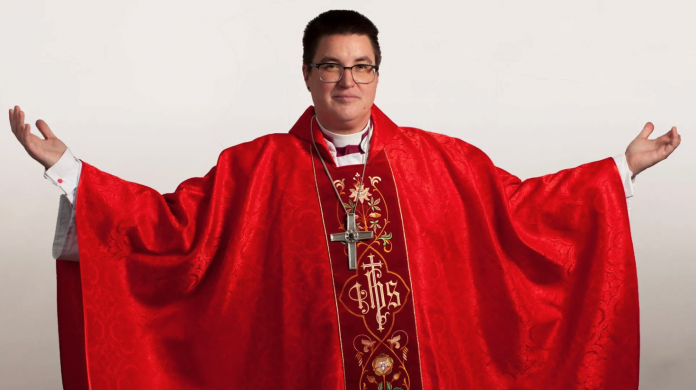 I’ve long believed that the left will eventually devour itself as one offense to tolerance crashes up against another. We’re seeing this take place in the Evangelical Lutheran Church of America, a far-left denomination that has proven what happens when LBGTQetc issues collide with racial and ethnic concerns — with a sprinkle of neurodivergence thrown in for good measure.

In the ELCA’s Sierra Pacific Synod, which covers Northern California (naturally) and parts of Nevada, the church has asked its first transgender bishop to resign over accusations of racism against the Hispanic community.

Bishop Megan Rohrer is under fire for removing a Hispanic pastor on the Feast of Our Lady Guadalupe, one of the holiest days of the year for Hispanic Christians.

(Disclaimer: I’m really confused about Rohrer. I can’t tell if the bishop is a male transitioning to female or vice versa. Rohrer’s Twitter bio features “they/he” pronouns, but I just don’t know. Since I don’t know which correct pronouns — as opposed to “preferred” pronouns — to use, I’ll simply refer to Rohrer without pronouns.)

Although the offending event took place in December, Bishop Elizabeth Eaton, head of the Evangelical Lutheran Church in America, waited for the “listening team,” a left-wing term if I’ve ever heard one, to release its report. And it’s all so confusing with preferred pronouns and changing terms for ethnicities.

Related: Wokeism Is a Religion Without Grace

It’s best if you’re sitting down for this one.

Rohrer fired Rev. Nelson Rabell-González of Misión Latina Luterana in Stockton, Calif., on Dec. 12. after “continual communications of verbal harassment and retaliatory actions from more than a dozen victims from 2019 to the present.” The removal took place on the Feast of Our Lady Guadalupe, which commemorates the visitation of the Virgin Mary to a Mexican man in the 16th century.

Emily McFarlan Miller of Religion News Service reports that “Rabell-González acknowledged allegations against him, saying he was accused of ‘verbally mistreating a pastoral intern and members of the church staff’ in a previous position at a different church.”

Oddly enough, one of the complaints against the pastor is that he was too woke.

“The pastor, who is Afro-Caribbean, said he had been asked to resign from that church and sign a nondisclosure agreement, which he declined after members complained about his support for Black Lives Matter and immigrant rights,” Miller writes.

So to summarize where we are so far: a pastor who may or may not have a problem with verbally abusing interns but also may or may not be a little too far to the left for parishioners’ tastes was going to have to resign. It all got worse when the transgender bishop showed up to do the deed on a holy day for Hispanic Christians.

Here’s how Alejandra Molina of the Religion News Service describes the scene:

As the report details, the Misión Latina Luterana congregation in Stockton, California, had no idea about Rabell-González’s removal until members noticed he wasn’t the one leading the Dec. 12 worship service and celebration. Instead, the Rev. Hazel Salazar-Davidson — whose opposition to the pastor’s removal that day is detailed in an attachment of the report — was directed by Rohrer to lead the service. Congregants began questioning out loud about his whereabouts.

Rohrer, who was at the service, didn’t offer further explanations after congregants were informed of his removal, according to the report. Parishioners described Rohrer’s facial expression as a “smirk” that made them feel “small, attacked and humiliated,” but the report also noted that “such an expression on the face of an autistic person is often a response to the stress of a situation.”

Rohrer actually attempted to hide behind the old “neurodivergent” chestnut as an excuse for the smirk as these shocked churchgoers reacted to the sudden dismissal of their pastor. I have a hard time believing that the ELCA would put a bishop in charge of a synod if they didn’t believe that the bishop could keep such “neurodivergent” behavior in check.

The New York Post reports that the congregation was upset at the announcement and that Rohrer wore a bulletproof vest to the church for Rabell-González’s firing.

At least Rohrer issued an apology shortly after the incident occurred.

“Today I ask forgiveness for the ways my action and inactions caused pain, grief, and anxiety for the Latino/x/é community,” Rohrer wrote. (And no, I didn’t hit some wrong keys on my keyboard.) “I understand that trust can be lost with one action and must be rebuilt with hundreds of trustworthy actions. I am grateful to all who have educated me about the needs of the Latino/x/é community and remain committed to doing the work needed to repair relationships. The Sierra Pacific Synod and I seek to be ever-reforming in our anti-racism and anti-bias work.”

The “listening team” (sorry, I can’t type that without chuckling) issued its report, which also overflows with intersectional terminology and explanations.

“The reader should note that the italicized pronouns they/them/their, meant to express use in a singular form when referring to an individual’s preferred pronoun, will be used throughout the document. Additionally, the affected Latiné community has changed names during its journey…” the report explains in a note at the beginning.

After a whopping 23 pages, the report’s conclusion sounds like the “listening team” has done plenty of listening — to Robin DiAngelo and Ibrahim X. Kendi.

“A person who behaves in passive or uninformed ways that are racist is like someone who is standing still on the walkway,” the team writes. “No conscious effort is being made to walk toward racism, but the person is being carried along to the same destination.”

“Some people may become so distressed by the movement into active racism, that they choose to turn around and walk in the opposite direction,” the report continues. “But unless they are walking more quickly than the speed of the walkway — unless they are very intentionally anti-racist — they will find themselves still carried along with the others.”

At the end of the “listening,” Bishop Elizabeth Eaton determined that Rohrer needed to resign. And so Rohrer did so, a scant 13 months after becoming the first transgender bishop in the ELCA.

What have we learned today? As Dr. Albert Mohler put it on his podcast, “as you’re thinking about all the incredible moral confusion here, that’s really what we need to see.”

When intersectionality is part of your modus operandi, you might come across scenarios where one grievance group clashes with another. In the ongoing struggle of left-wing cultures, one group will win over the other. It has to, and I can’t help but think we’ll expect to see skirmishes like these more often on the left. And then how long will it be before their whole coalition spins apart?