The Vaccine Stockpile Is Headed to the Dump 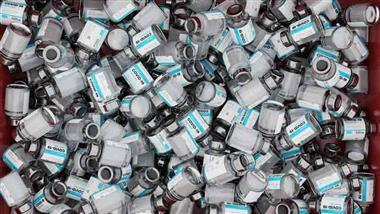 The U.K. stockpiled 650 million doses of COVID-19 injections during the pandemic. Only 142 million have been used. The remainder expire six to 12 months after their date of manufacture,1 which means millions of doses are going to end up as trash.

It’s unknown whether some doses from the 650 million figure have yet to be manufactured, or exactly how much was paid for each dose, but what’s clear is that a massive waste of federal funds is imminent.

Based on estimates that the U.S. government paid about $20 for each dose of Pfizer’s COVID-19 shot, about $15 for Moderna shot doses and about $4 for each dose of Astra Zeneca’s shot, assume an average price of $10 per dose of COVID-19 injection purchased.

Given this estimate, about $5 billion stands to be wasted on unused shots. “Will the public be forgiving of this massive waste of public funds on account of it occurring with good intentions during a state of emergency?” Daily Sceptic asked. “That remains to be seen.”2

Billions of Dollars Squandered in the Name of COVID-19

In addition to millions of doses of COVID-19 shots set to expire, the U.K. government has also written off billions of dollars in money spent on protective equipment, including items not used before their expiration dates and other equipment deemed unsuitable for use. Another $715.9 million was spent on ventilators, only 10% of which were actually used.

Similar ventilator stockpiling occurred in the U.S. but as early as August 2020 it was clear that this was a mistake. “The U.S. has too many ventilators,” The Washington Post wrote on August 18, 20203 — an about-face from media headlines posted just months earlier, which talked of ventilator shortages and a “desperate need for ventilators.”4,5

At the time, the U.S. Department of Health and Human Services (HHS) had distributed 15,057 ventilators, while 95,713 sat unused in a federal stockpile. For comparison, 10,000 ventilators made up the federal stockpile in April 2020.6 By September 2020, HHS stated that the national ventilator stockpile had reached maximum capacity, with close to 120,000 available ventilators.7 As the Daily Sceptic explained:8

“This gross misuse of taxpayers’ money must be examined in the independent inquiry and by Government so the lessons can be learned and in future a robust management system applied in real time so that even stocks purchased in haste and with urgency are kept in reasonable proportion to anticipated demand.

The over-reaction and panic in spring 2020 resulted in decisions that have now turned out to be a huge waste of public money. If there was perceived to be a shortage of anything that might conceivably be needed to fulfil the needs of the public emergency, the public purse was always open.

Actually, the purse appeared to be treated more like Mary Poppins’ bottomless magic carpet bag, with no sign of any prudent oversight applied to funding decisions as long as they served the purpose of proving to the public that the Government was ‘doing something’ about Covid. The results of that fiscal incontinence are now clear for all to see.”

Millions of COVID-19 Shots Wasted in the US

The money wasted stockpiling COVID-19 shots is not unique to the U.K. In the U.S., an ABC News investigation found that millions of shots have gone unused as the demand for the injections fizzled out. In speaking with health department officials in all 50 states, they found millions of instances of COVID-19 shots going to waste, sitting unused, or set to expire in coming weeks. This includes:9

It’s said that history repeats itself, and we’ve seen massive waste from stockpiled vaccines before. Pandemics have been coming and going around the globe for centuries, but in recent history, they’ve been used as points of manipulation that have profited corporations, particularly pharmaceutical companies.

In 2005, you may remember, it was predicted the bird flu epidemic would kill from 2 million to 150 million people,11 but turned out to be a whole lot of hot air, and prompted me to write the book “The Great Bird Flu Hoax.”

At the time, Nature Immunology published an editorial stating that the fear of bird flu had prompted government officials to prioritize developing plans to deal with pandemic influenza, and WHO had named bird flu the No. 1 health concern.

In the years that followed, WHO executed agreements — so-called “sleeping contracts” — with European and African nations in the name of protecting people from a future global pandemic.

The contracts stated that countries would buy vaccines in the event of a pandemic, but this would only be necessary if WHO declared a phase 6 influenza pandemic.12 Both GlaxoSmithKline (GSK) and Baxter were named in contracts with the U.K. parliament, for instance, which stated the pharmaceutical companies would supply a pandemic influenza vaccine to the U.K. and were valued at £155.4 million (more than $206 million) over four years.13

“Unfortunately,” CHD noted, “the government officials who signed the contracts never suspected that GSK makes multimillion-dollar donations to the WHO in return for control over decisions that result in GSK windfalls.”14

Swine Flu: Is History Repeating Itself?

On June 11, 2009, WHO declared H1N1 swine flu to be a phase 6 global influenza pandemic, even though it had only caused 144 deaths worldwide. That declaration put the sleeping contracts into an active state, to the tune of $18 billion directed to the production of H1N1 vaccines, including GSK’s Pandemrix.

It was later revealed that scientists who drafted WHO guidelines advising governments to stockpile drugs for swine flu had been paid by the pharmaceutical companies that would profit from the recommendations.15 WHO sought the opinion of an Emergency Committee from WHO’s International Health Regulations Review Committee.

The guidance of many of these leading experts benefited the pharmaceutical industry, but their identities were kept secret in order to “protect them from outside influences.”16 In 2010, a joint investigation by the BMJ and the Bureau of Investigative Journalism revealed troubling conflicts of interest between key panel members and the pharmaceutical industry. According to the BMJ:17

“The investigation by the BMJ/The Bureau reveals a system struggling to manage the inherent conflict between the pharmaceutical industry, WHO, and the global public health system, which all draw on the same pool of scientific experts.

Our investigation has identified key scientists involved in WHO pandemic planning who had declarable interests, some of whom are or have been funded by pharmaceutical firms that stood to gain from the guidance they were drafting.

Yet these interests have never been publicly disclosed by WHO and, despite repeated requests from the BMJ/The Bureau, WHO has failed to provide any details about whether such conflicts were declared by the relevant experts and what, if anything, was done about them.”

At the time, the late Paul Flynn, Labour MP, told The Guardian, "The tentacles of drug company influence are in all levels in the decision-making process … there has been a distortion of priorities of public health services all over Europe, waste of huge sums of public money and provocation of unjustified fear."18

In a similar example, a whistleblower lawsuit filed against drug maker Roche alleges the company made false claims and misrepresented studies, causing the U.S. government to stockpile $1.5 billion of its influenza medicine Tamiflu (oseltamivir).19

The lawsuit, which was unsealed in September 2019, alleges Roche duped the U.S. government into stockpiling Tamiflu while mispresenting its effectiveness. According to the Houston-based Lanier Law Firm, which filed the suit:20

“The lawsuit claims the drugmaker’s scheme involved publishing misleading articles falsely stating that Tamiflu reduces complications, severity, hospitalizations, mortality and transmission of influenza. The company then used those articles to aggressively market the drug to the government for pandemic use.”

Excessive Use of PPE Leads to Glut of Pandemic Waste

Personal protective equipment, or PPE, amassed during the COVID-19 pandemic has led to another problem — a massive volume of medical trash that’s straining waste management systems and the environment. The World Health Organization pointed to the overuse of gloves and “moon suits” during the pandemic as instrumental in the glut of health care waste now being seen worldwide.21

According to WHO, 87,000 tons of PPE were accumulated from March 2020 to November 2021 in order to fight COVID-19. Most of it has gone to waste. The unprecedented injection campaign also created 143,000 tons of waste from syringes, needles, and safety boxes, which pose a risk to people living in communities near poorly managed landfills and waste disposal sites.22

A WHO global analysis of health care waste due to COVID-19 also found that more than 140 million test kits may generate 2,600 tons of noninfectious — mostly plastic — waste, while “731,000 liters of chemical waste (equivalent to one-third of an Olympic-size swimming pool) have been shipped.”23 In the U.K., nearly 5 billion PPE items, worth nearly $3.4 billion, will also be wasted because they’re no longer needed or aren’t suitable for use.24 The WHO analysis noted:25

“Today, 30% of healthcare facilities (60% in the least developed countries) are not equipped to handle existing waste loads, let alone the additional COVID-19 load.

Masks Are Stressing the Environment

WHO’s analysis paints a dire picture of the environmental havoc wreaked by the massive overuse of PPE during the pandemic, but it doesn’t even account for another major waste source — masks. According to Maggie Montgomery, technical officer for water, sanitation, and health in the WHO Department of Environment:26

“In terms of the waste generated by the public, in particular masks. For example, in 2020, there were 4.5 trillion additional disposable masks thrown away by the public, which led to 6 million tons of additional waste. So, certainly, the public is generating the most. At the same time, we feel that the health sector has a really important role and there are many concrete things that can be done to reduce, unnecessary use of PPE.”

Montgomery said that waste in health care facilities increased by an average of three to four times during the COVID-19 pandemic, with some facilities seeing 10-fold increases.27 “We saw a lot of investments happening on the PPE side, on the vaccine side, on the testing side,” she said. “None of these investments were thinking, ‘How are we going to handle all the waste?’”28

COVID-19 pandemic waste — in the form of billions of dollars in unused shots and a massive volume of PPE and mask trash — is now something that the world will be grappling with for years, and possibly decades or more, to come.