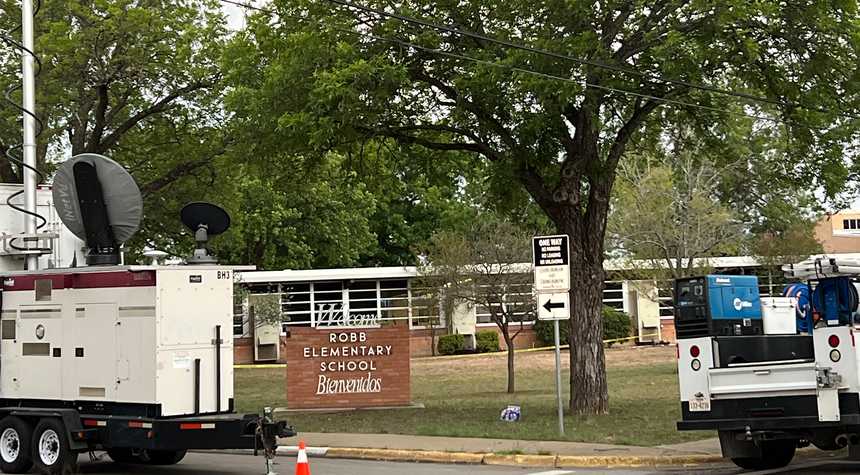 Biden: ‘Just This Month, We Thought that White Supremacy Was Finally Being Got Hold Of’

It’s no secret that Leftists who were all buttered up to stoke anti-cop hate on the second “Floydiversary” were bitterly disappointed to be upstaged by the horrendous school massacre in Uvalde, Texas. Former president Barack Obama committed a particularly egregious faux pas when he persisted in tweeting about “muh racism” before the elementary school victims were cold.

“As we grieve the children of Uvalde today, we should take time to recognize that two years have passed since the murder of George Floyd under the knee of a police officer. His killing stays with us all to this day, especially those who loved him,” tweeted the self-centered, tone-deaf former president.

“Sorry about your tragedy, but we’ve been prepping our 2022 anti-law enforcement campaign for months now, so please direct your attention this way.”

The lust to hate on cops was already stoked and would not be denied. Even a horrific tragedy like a child massacre couldn’t derail it. Anti-police forces quickly adapted to repurpose the Uvalde shooting into an opportunity to gin up cop hate.

Leftist disinformation leaders seized upon a snippet of an interview deliberately misinterpreted it and spread the poison to their easily manipulated followers. Shamefully, the officers they were smearing were among those who courageously entered the building during the active shooter incident — some while off-duty — and safely evacuated dozens of children and teachers.

The despicable fake narrative arose from a video of comments made by Texas Department of Public Safety spokesman Lt. Christopher Olivarez to KENS 5 reporter Vanessa Croix. The exchange that triggered multiple Leftists to fly off the handle occurred when Croix prompted, “And we’ve also heard word that a Border Patrol agent was struck with gunfire. A few officers were shot. We’ve heard that some law enforcement officers actually went into school to get their kids out. Can you talk about that?”

Olivarez answered, “Right. So what we do know, Vanessa, right now, is that there were some police officers, and families trying to get their children out of school because it was an active shooter situation right now. It’s a terrible situation right now. And of course, just as we mentioned, the loss of life. It’s just a terrible, it’s a terrible tragedy. … But again, we’ve got to keep acknowledging those brave men and women that actually were there on the scene that met this suspect. And, of course, we know that they were met with gunfire. Some of them were shot. But at the end of this, the suspect was shot and is now deceased. The threat is now neutralized.”

Here’s a Texas DPS Lieutenant telling a local station that some officers breached the school to get their own children BEFORE the shooter was taken down. pic.twitter.com/BrvS4sCqp6

Mediaite reported the clip under the misleading headline, “WATCH: Texas Police Spox on Live TV Confirmed Cops Went In for Their Own Kids During Uvalde Shooting.” The first two paragraphs of the story read:

Texas Department Public Safety spokesman Lt. Christopher Olivarez confirmed to a reporter during a live shot that police officers went into Robb Elementary School to get their own children during the massacre.

Amid outrage over reports that frantic families who complained about police inaction during the massacre were held back by police, a clip of a live interview with Olivarez from Tuesday has gone viral.

The quick-to-believe-anything-bad-about-cops crowd swung into action to amplify the faulty interpretation.

Uncommonly gullible Lefty activist lawyer Qasim Rashid bleated, “My God. It wasn’t just that cops waited 40 min to storm the school. A Texas DPS Lieutenant confirms cops stormed the school to get only their own kids and leave while the terrorist was still killing kids. Horrific. Horrific. Horrific.”

Get only their own kids and leave? How on earth did he come up with that scenario?

“The reason the Uvalde cops went in to save their own kids but not other people’s kids is because we literally train all cops in the country to be #Cowards. They’re supposed to only care about themselves and not the citizens. Attend any police training and you’ll see this taught!” declared hard-left “Young Turk” Cenk Uygur.

Is this rubbish based on that interview clip? Please. I sincerely hope you're not actually implying that police went into the school, grabbed their own kids, high-fived the shooter, and left. Do realize how idiotic you sound?

Off-duty U.S. Customs and Border Patrol agent Jacob Albarado was getting a haircut when he got a text from his wife, Trisha, a teacher at Robb Elementary School. “There’s an active shooter,” she wrote. “Help. I love you.”

Because this is Texas, Albarado’s barber had a rifle handy, which the agent grabbed and took to the school with him.

When he arrived, a tactical team was already preparing to enter the building. Albarado and several other officers organized themselves and went in to start evacuating students to safety. Two officers with weapons drawn covered two others as they went classroom-to-classroom, clearing the rooms and leading dozens of panicked children and teachers to the sidewalk outside.

Albarado’s wife as well as his second-grade daughter, a student at Robb, were in a different part of the building than the barricaded shooter. Albarado eventually located his daughter, paused to hug her, then continued onward with his team to get more students safely outside.

Compare and contrast that reality to the ludicrous misinterpretation of a police spokesman’s words by the thought leaders of the Left. What can these people be trying to accomplish? More curious, how do they even have jobs?

The news that the deranged shooter was barricaded inside a classroom for an hour and a half while law enforcement apparently misjudged and mishandled the situation is infuriating enough. Obviously, there will be substantial analysis, policy improvement, and even punishment where it is warranted. But when there is already plenty of rage and sorrow to go around, what reason can there possibly be to make up ugly things that never happened and disseminate one’s bigoted hate-fantasies? Why defame good, brave people who stepped in to help?

That the officers had loved ones of their own in the school could only be a cause for condemnation to perpetually angry people whose judgement is impaired by hatred.