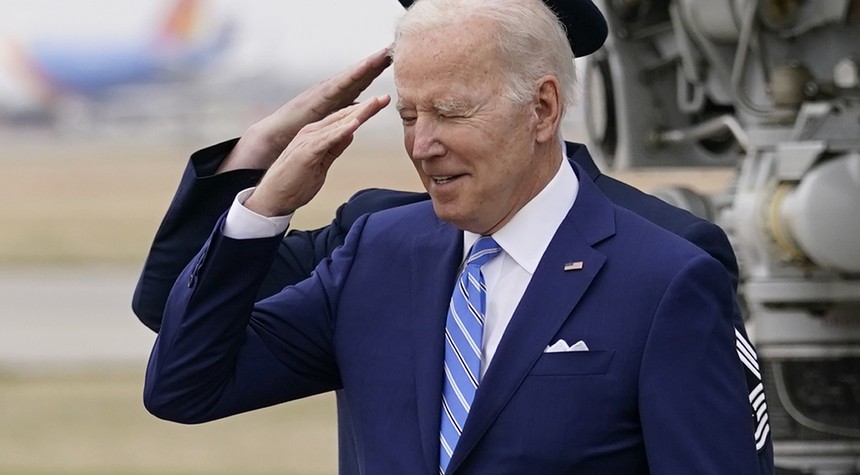 Joe Biden’s tumultuous year and a half of pretending to be president has seen the fall and rise of many things in the United States: gas prices, of course, are rising through the roof, along with prices on pretty much everything else. But for the stock market, it’s a different story altogether. Yahoo Finance reported Friday that U.S. stocks have just endured their longest losing streak since 2001; in other words, Joe Biden’s presidency has had an effect on the U.S. economy that is equivalent to 9/11.

This is not in any way to diminish the untold suffering that resulted from the attacks. Nearly 3,000 people were brutally murdered. There is no equivalent for that and no mitigation of its horror. The analogy between then and now is not in that but in the fact that the economy is suffering to a degree that we have not seen since the immediate aftermath of that terrible day.

According to Yahoo Finance, the major stock indexes were “heading for steep weekly losses as concerns over the resilience of corporate profits in the face of inflation resurged this week.” Luckily, Old Joe’s Commie pals threw us a lifeline: “the S&P 500 traded lower, erasing earlier gains after China’s central bank unexpectedly cut a benchmark interest rate to offer some relief to borrowers in the country still grappling with a widespread COVID-19 outbreak.”

Nonetheless, “the index dropped more than 1.5%, bringing it on an intraday basis lower by more than 20% from its recent record close from Jan. 3. If the losses hold through market close, the S&P 500 will have entered a bear market.” Well, of course, we will. That is as certain as Joe’s next teleprompter gaffe.

Meanwhile, the news from the other indexes was no better: “the Dow shed more than 400 points or 1.4%, and the Nasdaq dropped more than 2% during intraday trading. Treasury yields sank, with the yield on the benchmark 10-year note sinking to just above 2.8%, and U.S. crude oil prices edged up to more than $112 per barrel.” And this has been going on for a while: “the losses Friday for the major U.S. stock indexes extended a slide seen earlier this week. As of Thursday’s close, the S&P 500 was on track for a weekly loss of 5.4% — its biggest since January. And the index was also on track to post a seventh straight weekly loss or its longest losing streak since 2001. The Dow and Nasdaq paced toward weekly losses of 5% and 6.2%, respectively.”

The longest losing streak since 2001. What happened in 2001 that made stocks take a nosedive? According to CNN Money, that fateful year “began with a bang. The Nasdaq surged a record 14.17 percent on the second trading day of 2001 after the Federal Reserve surprised investors with a half-percentage point rate cut. That was the first of 11 attempts by central bankers to revive consumer and business spending. Stocks continued to rise in January only to tumble by April. They gained sharply through May before gradually declining through summer.”

But then came 9/11, and suddenly the economic picture was drastically different: “the Dow industrials fell more than 1,300 points in the first week after the markets reopened following the terror attacks, its worst week since the Great Depression. By Sept. 21, the major indexes had fallen to three-year lows. But less than 10 weeks later, the major indexes erased their post-Sept. 11 losses, vindicating investors who called for patriotic buying after the attack.”

Will the American economy similarly rebound now? It could, but there is no chance of such a recovery while Joe Biden and his henchmen have their knees on our collective economic windpipe. It is the Biden administration’s profligate spending, an uncontrolled increase of the money supply, and relentless commitment to green fantasies and socialist internationalism that have gotten us in this fix, and there is no end in sight.

Could the stock market recover? Sure, if Biden suddenly became an America-First president and focused on relieving the plight of the American people rather than the Ukrainian people and if he abandoned his schemes to destroy the economy chasing more green delusions and worked to restore the energy independence the nation had achieved during the Trump administration. But that’s about as likely as Old Joe reading a message off his teleprompter without saying something silly and/or incoherent.

The next milestone will be when the stock downturn becomes the worst since the Great Depression. Watch for that one soon. And then what will we see in America? Breadlines? Hoovervilles? Food riots? In Joe Biden’s America, during the presidency that Nancy Pelosi gushed was “perfect,” all this and more is in the offing. Old Joe Biden’s presidency will long be remembered for its many milestones, and wrecking the strongest economy on the planet will stand as one of the foremost.