The Passover story is really about “protecting democracy.” 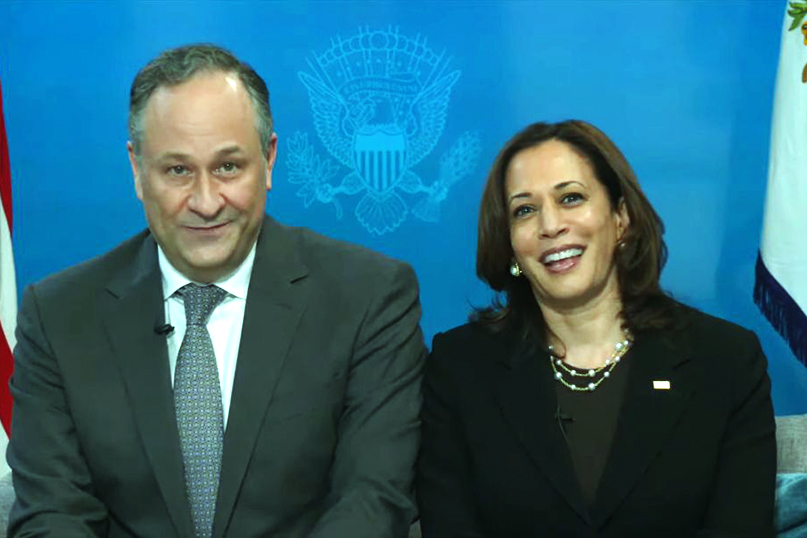 Emhoff spoke about celebrating Passover as a child, which he said often involved attending seder at his grandmother's home in Brooklyn. 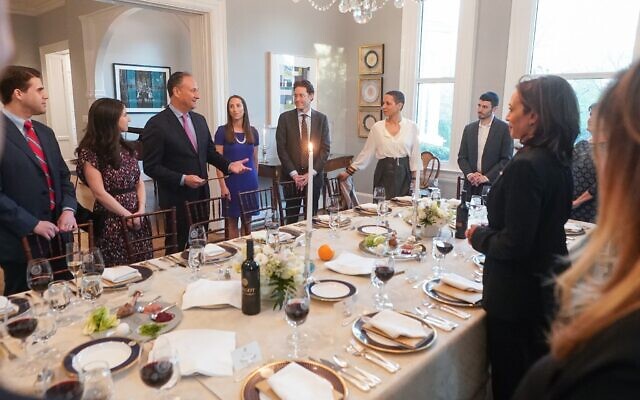 Vice President Kamala Harris and second gentleman Doug Emhoff will be the first known second family to host a Passover seder at the vice president’s residence Friday after holding a virtual celebration last year. Harris confirmed her holiday plans on Twitter, posting a traditional Passover greeting. “Chag Sameach to all those celebrating Passover. The news was first reported by CNN, citing a White House official who revealed that Jewish members of Harris and Emhoff’s staff will attend the gathering at the Naval Observatory in Washington along with their loved ones. The vice president also reportedly informed Israeli President Isaac Herzog of her plans to host the seder during their Thursday call. Emhoff became the first Jewish spouse of a US president or vice president when Harris was sworn in last year. The couple were married in 2014. Just two months after the inauguration, the second gentleman led the first-ever virtual Passover seder at the Naval Observatory, saying at the time he hoped it would be the last virtual celebration. The couple will hold the seder at the Naval Observatory in Washington along with their loved ones. AP Photo/Pablo Martinez Monsivais, File In November of last year, the vice president’s family hung the first mezuzah on the front door of an executive residence in US history. The celebration comes as Washington, DC, is hit with a wave of positive COVID-19 cases — with both Harris and President Biden potentially being exposed several times. Multiple administration officials, including Harris’ communications director Jamal Simmons and Attorney General Merrick Garland, contracted the virus after attending the superspreader Gridiron dinner April 2. As of Monday, both the president and vice president had tested negative for the virus. Harris’ office did not immediately respond to The Post’s request for comment.

Daniel Greenfield, a Shillman Journalism Fellow at the Freedom Center, is an investigative journalist and writer focusing on the radical Left and Islamic terrorism.

"Good evening to the thousands of you who are joining us from around the country," Doug Emhoff, the Hollywood lawyer serving as Kamala's husband, intoned.

The sign language interpreter on the small box next to him spread her arms in what was either an attempt to 'sign' Passover or a gesture of disbelief and contempt.

The "People's Seder" was about to begin with its apostrophe in the right place and heart in the wrong place.

As the Biden White House rushes to enable Iran's nuclear program and the modern-day pharaonic mullahs plotting, like the original, to wipe out the Jews, it put on a "People's Seder" to distract American Jews from its complicity in the latest acts of terror from Iran to Israel.

The People's Seder sounds like a Berkeley commune. A day before the eve of Passover, the administration’s second virtual seder served no function except to give Emhoff something to do. Perhaps knowing that, Emhoff claimed, with a mostly straight face, that he had traveled the country hearing from people “how much last year’s virtual seder had meant to them”.

Emhoff made no mention of the over a dozen Israelis recently killed in terror attacks. Neither, seemingly, did so many of the speakers who rambled on about the importance of “empathy”.

Empathy applies to everyone except the Israeli Jews mourning their dead.

Passover, to Emhoff, proved to be about Ukraine, the pandemic, and “protecting democracy”. Maybe Emhoff can tell me which democratic process elected Moses.

Then a particularly haggard Biden, looking awkwardly at things off-camera, boasted that this was the “first time in three years that families sit around the seder table.”

That might be true in Washington D.C., but it certainly isn’t true in America.

Biden then declared that during Passover, his hearts were “with the people of Ukraine”.

The camera cut to the White House's bewildered Jewish liaison.

Passover, so far, was about Ukraine.

The previous seder, featuring an anti-Israel activist, was apparently so popular that Emhoff decided to recycle his shtick about “gelatinous gefilte fish” from last year. Then he declared that “ever since I was a kid, I have been inspired by the story of Exodus.”

Indeed, who could forget the time Moses went back to Egypt, married Pharaoh’s sister, and settled down to the business of assisting in the genocide of the Jews.

Emhoff’s presentation was followed by a long list of speakers eager to delve into Passover as a metaphor and uninterested in it as a substantial reality.

There was Andrew Rehfeld, the first "non-rabbinic" head of the Reform Movement's Hebrew Union College seminary, who had defended BDS supporters against claims of antisemitism.

"Some students have been attracted to the BDS movement because of their love of Israel, and their repugnance of what they see as its unjust treatment of Palestinians," Rehfeld had argued. "BDS is not the answer.  But that does not mean that their concerns are without merit."

Rehfeld appeared with a large placard behind him declaring, "Another Jew for LGBTQ Equality".

The non-rabbinic head of a movement that denies the existence of the G-d of the Torah made no mention of the Creator of the Universe but spoke about “bullying” and “civil society”.

That was followed by J Street’s Deborah Lipstadt, who talked about Ukraine, and Jeopardy host Mayim Bialik who… also talked about Ukraine. An ignorant viewer might have concluded that in the Bible, the Jews had left Ukraine, rather than Egypt. After a brief interjection by an Orthodox Rabbi who actually had a seder plate on display, next up was Afroculinaria's Michael W. Twitty, a black gay social justice chef who had previously accused Israel of racism, and who explained that in his seder molasses "represented the transatlantic slave trade."

The People’s Seder was dedicated to philosophical abstractions that erased Jews and negated the fundamental truths of the Passover story. Attaching the "People's" to something is a negation. That's why the various democratic people's republics were anything but and why the People's Seder isn't a seder, or at least not a Jewish one, but a People’s Republic of Seder.

Less than two minutes into his virtual farce, Emhoff had declared that "even though the Exodus tells the story of a particular people, its message is universal." Everything about Judaism to secularists is universal, and nothing is particular or relevant to the actual Jews.

It would be dangerous to focus on the particular people currently being killed once again in their own country because Emhoff’s wife’s boss chooses to stand with Islamic terrorism.

After the People’s Seder was done, Ambassador Tom Nides, who had been caught praising a BDS group and boasting of trying to keep Jews out of Jerusalem, issued a press release in English, Arabic, and Hebrew (in that order) which urged “Jews, Muslims, and Christians” (also in that order) to avoid "actions that further escalate tensions" during "this sacred holiday period".

That would include concluding the seder with the traditional call, “Next Year in Jerusalem”, signifying a return to a city that Biden and Nides deny is Jewish and want to keep Jews out of.

Nides, Emhoff, and other administration enablers of Jewish descent erase Jews from Passover and Jerusalem and replace the real people and their history with social justice abstractions.

Part of the problem is that Emhoff, like your average leftist of Jewish ancestry, knows as much about Judaism as I do about dating Kamala. And cares just as little. Stripping Judaism of its particularism appears liberating to someone like Emhoff because it also frees him of what he and his family see as a limitation on their identities and their potential social aspirations.

The People’s Seder is not a Jewish people’s seder because that’s the last thing Emhoff wants.

Liberation to lefties of Jewish descent means the ability to be less Jewish. That is at odds with the message of Passover and of Judaism which is that liberation comes from being more Jewish. The Jews who had tried to fit into Pharaoh’s tyranny had become slaves, while the slaves who defied an empire by conducting a seder that mocked Egyptian beliefs were set free.

Universalism is enslaving while particularism is liberating.

The Passover seder’s message, with its careful recreation of the particular experiences, sensory, emotional, and intellectual, of Egyptian slavery and liberation, is a painstaking exercise in particularism. The People’s Seder, like virtually all lefty religious practices, is an equally painstaking exercise in rejecting the particular for the universal by turning the events into metaphors that can be glibly made to mean anything as long as it’s unrelated to the Jews.

It’s all very well to turn the story of Passover into a metaphor, but Moses didn’t arrive to talk to Pharaoh about abstractions like empathy and emotional growth, but with a simple message.

The People’s Seder claims to be about liberation but actually enslaves. It rejects “the four languages of liberation” whose four steps "I will take you out", "I will save you", "I will redeem you" and "I will take you" develop it as a relationship between G-d and the Jewish people, to universalize it into hollow self-help empowerment in which there is no relationship with G-d.

Instead, there is a relationship with the leftist deity of government all too familiar to Pharaoh.