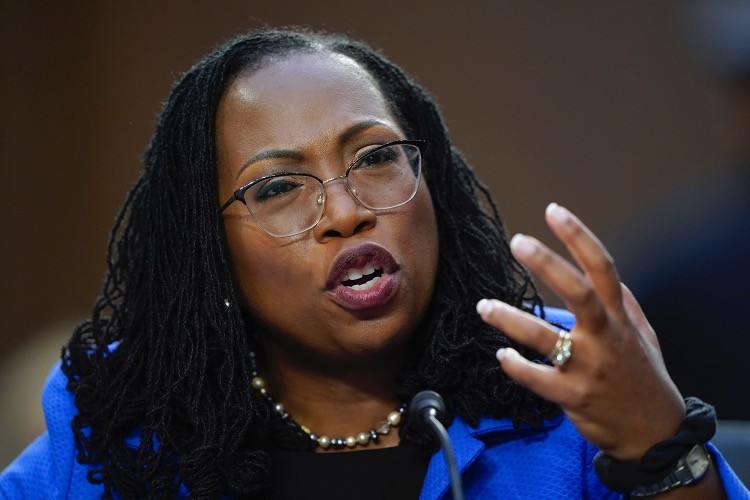 The path from Ketanji Brown Jackson to critical race theory and racism it turns out is a very short straight line. This has turned out to be a pattern with Biden nominees and that’s no coincidence. Obama was also a big fan of Derrick Bell.

Ketanji Brown Jackson’s interest in critical race theory has been highlighted before, but this focuses in on Derrick Bell.

In a 2020 lecture, Jackson highlighted Derrick Bell, “the godfather of critical race theory,” saying that her family had Bell’s book “on their coffee table for many years.”

Bell’s 1993 book “Faces At The Bottom Of The Well: The Permanence Of Racism” has been lauded as “a pioneering contribution to critical race theory scholarship.”

Bell believed that “the Constitution was like ‘roach powder,’ that whites might commit ‘racial genocide,’ and that his motto was ‘I live to harass white folks.’”

The same lecture also has Jackson gushing over BLM riots.

“And I will finish with what might be my favorite civil rights photograph of modern times. This iconic image, which was taken by Reuters photographer Jonathan Bauchman during a 2016 protest of the police-involved fatal shootings of Alton Sterling and Philando Castile, has won several awards and has a name: it is called “Taking a Stand in Baton Rouge.” The picture features a nurse from Pennsylvania named Leshia Evans, who had traveled to Louisiana to attend her first protest. She was arrested by the two heavily armed officers you see in that photograph, and spent the night and most of the following day in jail.”

During her lecture, Jackson mentions, “Professor Derrick Bell, who was a civil rights lawyer and the first tenured African-American professor at Harvard Law School, wrote a book in the early 1990s about the persistence of racism in American life that he entitled “Faces At the Bottom of the Well”. My parents had this book on their coffee table for many years, and I remember staring at the image on the cover when I was growing up; I found it difficult to reconcile the image of the person, who seemed to be smiling, with the depressing message that the title and subtitle conveyed. I thought about this book cover again for the first time in forty years when I started preparing for this speech.”

As Christopher Rufo points out, Derrick Bell was a racist who hated America. And  “Faces At the Bottom of the Well” reflected that.

“Smart and super articulate, Minister Farrakhan is perhaps the best living example of a black man ready, willing, and able to ‘tell it like it is’ regarding who is responsible for racism in this country,” Bell has said.

Bell denounced Henry Louis (Skip) Gates for writing a New York Times op-ed condemning black anti-Semitism: “I was furious. Even if everything he said was true, it was inexcusable not to mention what might have motivated blacks to feel this way, and to fail to talk about all the Jewish neoconservative racists who are undermining blacks in every way they can.”

The very same interview began as follows: “We should really appreciate the Louis Farrakhans and the Khalid Muhammads while we’ve got them.” Khalid Muhammad was Farrakhan’s right hand, who made a name for himself referring to Jews as, among many other things, “bloodsuckers” whose “father was the devil.”

This is what Biden wants embedded in the highest court in the land.

President Joe Biden’s Supreme Court nominee, Judge Ketanji Brown Jackson, revealed to the Senate Judiciary Committee Tuesday that she does not know when human life begins. The next day, Jackson said that she “did not want to speculate” about a preborn baby’s viability.

During committee hearings Tuesday, Senator John Kennedy (R-La.) questioned D.C. Circuit Court of Appeals Judge Jackson about the Supreme Court’s role in deciding rights and laws and asked her one of the most fundamental questions of constitutional jurisprudence.

“When does life begin, in your opinion?” asked the senator.

It took Jackson a couple of seconds to force out herself, “Senator, uhm…” She shook her head, looking puzzled. “I don’t know,” Jackson finally replied with a nervous chuckle.

Jackson replied that she has “personal, religious, and otherwise beliefs that have nothing to do with the law, in terms of when life begins.” When asked about her personal beliefs, Jackson specified that she has a “religious belief” which she “sets aside” when ruling on cases.

Then Kennedy asked the Supreme Court Justice wannabe another question that Jackson did not have an answer to.

“When does equal protection of the laws attach to a human being?” he inquired.

“Well Senator, uhm… I believe that the Supreme Court, uhm… Actually, I actually don’t know the answer to that question,” Jackson said. “I’m sorry. I don’t.”

Here, Jackson, as pro-abortionists typically do, tried to separate theological beliefs — “my personal religious belief” — from the actual science.

Americans have already learned that biology is not Judge Jackson’s strongest skill. During hearings on Tuesday, she failed to answer the question, “What is a woman?” and excused herself by stating that she was “not a biologist.”

Just as in the case of the definition of sex, science is settled on when human life begins, and it is surprising, at best, that such a well-educated and experienced judge as Jackson does not know it.

Long-settled biological criteria and mainstream medical textbooks establish that a living human being is created upon fertilization and is present throughout the entirety of pregnancy. Many abortionists and abortion defenders have admitted as much; in 2019, University of Chicago Department of Comparative Human Development graduate Steve Jacobs found that 96% of more than 5,500 biologists he surveyed agreed, despite overwhelmingly identifying as “liberal,” “pro-choice,” and Democrats, and a majority identifying as “non-religious.”

According to an article posted in the National Journal of Medicine in 2004,

Life, in a true sense of the word, begins when the chemical matter gives rinse, in a specific way to an autonomous, self-regulating, and self-reproducing system.

At the same time, one could assume that Judge Jackson wouldn’t consider anyone any less than alive for not self-regulating or reproducing. A man or woman is not any less alive if he or she is unable to have children. Likewise, a person with impaired motor skills or an inherited metabolic disorder is equally alive as someone able. Logically, if a person is not autonomous, it does not mean he is not alive.

As an expert in the law, which she is supposed to be, Jackson must also know that law and science are closely connected. For example, 38 states have written and passed laws against fetus homicide. Of those, 29 have distinguished that life exists even during the early stages of gestation. Therefore, killing a pregnant woman is viewed as a double homicide in many states throughout the nation.

During the hearings on Tuesday, Jackson was asked by Senator Dianne Feinstein (D-Calif.) about her thoughts on Roe v. Wade and Planned Parenthood v. Casey, two Supreme Court rulings that established the right to abortion without an undue burden.

“Roe and Casey are the settled law of the Supreme Court concerning the right to terminate a woman’s pregnancy. They have established a framework that the court has reaffirmed,” Jackson said.

She added, “in order to revisit, as Justice Barrett said, the Supreme Court looks at various factors because stare decisis is a very important principle.”

On Wednesday, Jackson was questioned about her understanding of fetal viability, or the point at which a preborn child can survive outside the womb, by Senator John Cornyn (R-Texas). Cornyn wondered if the Supreme Court could repeal its cases over time. The senator implied that today, with medical and scientific advancements, a baby can survive at much earlier stages than in 1973, when the SCOTUS ruled on Roe.

“I hesitate to speculate,” Jackson responded, “I know that it [fetal viability] is a point in time that the court has identified in terms of when the standards that apply to the regulation of the right.”

She yet again reiterated that she was “not a biologist.”

Asked the same day by Senator Lindsey Graham (R-S.C.) if she knew that a 20-week-old pre-born baby can feel pain, she said she did not know.

As reflected in her background, Jackson’s stance on the matter isn’t surprising.

As an attorney, she co-wrote an amicus brief in 2001 for pro-abortion organization NARAL Pro-Choice America in favor of free-speech “buffer zones” outside of abortion clinics. In that document, she described pro-life protesters at the abortion clinics as “hostile,” “noisy,” and “in-your-face.”

As a judge, Jackson ruled against President Trump’s Department of Health and Human Services (HHS) effort to limit federal funding of Planned Parenthood.

If confirmed as a Supreme Court Justice, Jackson will almost certainly be a “yes” vote for the expansion of women’s access to abortion.