The UNRWA is essentially a tool of the “Palestinian” jihad, but Biden’s handlers have demonstrated months ago that they don’t care about that. 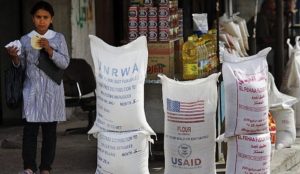 “US pledges $99 million to Palestinian refugee agency UNRWA,” Times of Israel, December 31, 2021 (thanks to Henry):

The US announced it would funnel $99 million to the UN body aiding Palestinian refugees Thursday, bolstering the cash-strapped agency amid a series of moves aimed at pulling Palestinians out of an endemic economic morass.

The State Department’s Population, Refugee and Migration Bureau said on Twitter that the money to the UN Relief and Works Agency will “provide education, health care, and emergency relief to hundreds of thousands of Palestinian children and families during a time of need.”

In April, US President Joe Biden’s administration announced that it would begin restoring funding to the Palestinians via UNRWA, which aids Palestinian refugees and their descendants, as Washington sought to restore ties with Ramallah following a freeze during the administration of former President Donald Trump.

There was no immediate comment on the funding announcement from Israeli officials. Israel’s previous government criticized the April announcement, but the current coalition has mostly refrained from breaking with the Biden administration publicly.

Jerusalem has nonetheless long pushed for UNRWA’s closure, arguing that it helps perpetuate the conflict with the Palestinians since it confers refugee status upon descendants of those originally displaced around the time of Israel’s War of Independence in 1948. The claim was echoed by Trump in his 2018 decision to stop funding the agency.