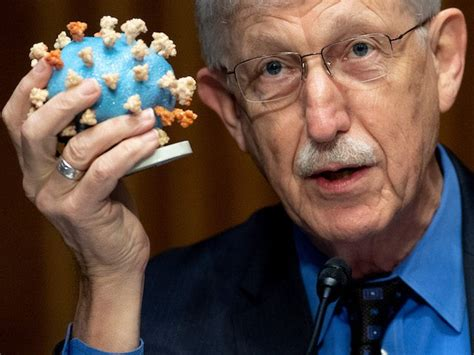 (Natural News) On Tuesday, National Institutes of Health (NIH) head Francis Collins resigned from his post following the revelation that he lied about funding illegal gain-of-function research on bat coronaviruses at the Wuhan Institute of Virology (WIV) in China.

Instead of jail time or the gallows, Collins is apparently strolling off into the sunset as always seems to be the case for white-collar criminals. He also issued a statement pretending to be an honorable man who served the country well in sending millions of American taxpayer dollars to China.

“It has been an incredible privilege to lead this great agency for more than a decade,” Collins had the gall to say in a statement posted to the NIH website.

“I love this agency and its people so deeply that the decision to step down was a difficult one, done in close counsel with my wife, Diane Baker, and my family. I am proud of all we’ve accomplished. I fundamentally believe, however, that no single person should serve in the position too long, and that it’s time to bring in a new scientist to lead the NIH into the future. I’m most grateful and proud of the NIH staff and the scientific community, whose extraordinary commitment to lifesaving research delivers hope to the American people and the world every day.”

Touching. Except for the fact that Collins is a liar who made “untrue” statements, as the media is calling them, about grants that were funneled from Tony Fauci’s National Institute of Allergy and Infectious Diseases (NIAID) to the WIV.

We now know, based on what has been revealed thus far, that American tax dollars were sent by Collins and Fauci to China for the purpose of creating “chimeric SARS-related coronaviruses” much like the one that has been circulating since the start of the plandemic.

These genetically modified coronaviruses would not exist, were it not for Collins and Fauci, who used Americans’ hard-earned money to created Frankenstein coronaviruses capable of infecting human cells.

According to Richard Ebright of Rutgers University, Collins and Fauci both lied when they denied any involvement in supporting illegal gain-of-function research. Collins and Fauci also lied about purposely enhancing pathogens, making them a pandemic threat.

It is Barack Hussein Obama who is responsible for putting Collins in his position back in 2009. Fauci, on the other hand, has been in government for decades – a quintessential political dinosaur, you might say.

Collins was the longest-ever serving director of the NIH, having held his position through Obama, Donald Trump, and now Joe Biden. Prior to being appointed, Collins worked at The BioLogos Foundation, which he founded, which reportedly aimed to “bridge a dialogue between science and religion.”

Even before being appointed by Obama, Collins was buddies with George W. Bush, who in 2007 awarded him the Presidential Medal of Freedom for his involvement in the Human Genome Project.

Like Fauci, Collins was all over the television last year pushing for face masks to be forced on children. Collins has also blamed unvaccinated Americans for the continuation of the plandemic, even though the science shows that “fully vaccinated” Americans are the ones driving disease and death.

“This is not a political statement or invasion of your liberties,” Collins rattled during one of his media appearances about forcing children to wear a mask. “This is a life-saving medical device. Asking kids to wear a mask is uncomfortable, but kids are pretty resilient.”

“If we don’t have masks in schools, this virus will spread more widely. It will probably result in outbreaks in schools, and kids will have to go back to remote learning, which is the one thing we want to prevent,” Collins further threatened.

To keep up with the latest news about the plandemic, be sure to visit Pandemic.news.