We're doing a bonus episode this week to cover the insanely authoritarian speech that Biden gave yesterday. Ostensibly, Biden is trying to implement policies to fight the pandemic. But the truth is, Biden's 25-minute speech did little more than scapegoat the unvaccinated and divide the country further. Not only does the science not support the vaccine and mask mandates that Biden wants (which we will prove), they are naked power-grabs by the government that any sane person should be more than concerned about. With America seeming to crumble all around us, what are we Christians to do? Resist.

Today we're discussing more hypocrisy and misinformation from the media on COVID, masks, and vaccines. The truth about these things is slowly becoming more widespread, and even left-leaning publications like the Atlantic are starting to understand and admit that forcing kids to wear masks is more harmful than helpful and not supported by any science. Then, to break down a major article about COVID and Dr. Fauci from another left-leaning source, the Intercept, we welcome fellow BlazeTV host Steve Deace back to the show. Deace has the details on what's going on with this Intercept article, in which details are revealed that show the relationship between Dr. Fauci and the Wuhan Institute of Virology.

Greg Kelly: Tough-talking Biden thinks he can order everyone around

'Tough-talking' President Biden thinks he can order everyone to get vaccinated, says Greg Kelly. "Like so many liberals he's hung up on power, virtue signaling, and [COVID] was the greatest thing to happen to Joe Biden."

Remdesivir can cause gastrointestinal symptoms (e.g., nausea), elevated transaminase levels, an increase in prothrombin time (without a change in the international normalized ratio), and hypersensitivity reactions.

Liver function tests and prothrombin time should be obtained in all patients before remdesivir is administered and during treatment as clinically indicated. Remdesivir may need to be discontinued if alanine transaminase (ALT) levels increase to >10 times the upper limit of normal and should be discontinued if an increase in ALT level and signs or symptoms of liver inflammation are observed.3

Considerations in Patients With Renal Insufficiency

Each 100 mg vial of remdesivir lyophilized powder contains 3 g of sulfobutylether beta-cyclodextrin sodium (SBECD), whereas each 100 mg/20 mL vial of remdesivir solution contains 6 g of SBECD.3 SBECD is a vehicle that is primarily eliminated through the kidneys. A patient with COVID-19 who receives a loading dose of remdesivir 200 mg would receive 6 g to 12 g of SBECD, depending on the formulation. This amount of SBECD is within the safety threshold for patients with normal renal function.4 Accumulation of SBECD in patients with renal impairment may result in liver and renal toxicities. Clinicians may consider preferentially using the lyophilized powder formulation (which contains less SBECD) in patients with renal impairment.

Because both remdesivir formulations contain SBECD, patients with an estimated glomerular filtration rate (eGFR) of <50 mL/min were excluded from some clinical trials of remdesivir; other trials had an eGFR cutoff of <30 mL/min. Remdesivir is not recommended for patients with an eGFR <30 mL/min due to lack of data.5 Renal function should be monitored before and during remdesivir treatment as clinically indicated.3

Rumble — The White House continues to negotiate with the Taliban to get Americans it left behind in Afghanistan, even after the group named four Gitmo terrorists to top positions in its so-called government. One America’s Scott Wheeler has more from Washington.

Rumble — Gov. Ron DeSantis: ‘I Think the Problem I Have with Joe Biden, More Than Anything, This Guy Doesn’t Take Responsibility for Anything’

Fauci in 2020: National Vaccine Mandates Would Be ‘Encroaching Upon a Person’s Freedom’

Patriot Militias Have Infiltrated the US Military!!!

As patriot militias continue to surge throughout the nation, leftists have begun to panic over their growing influence and presence in our nation’s military! In this video, we’re going to look at the astonishing rise of militia membership among active military personnel, we’re going to see how leftist liberals are literally panicked over such a rise and stick with me to the very end of this video when we’ll discover precisely WHY patriot militias are surging among active military and law enforcement officers, and why that surge is just beginning; you are NOT going to want to miss this!

What If We Had Fought World War II the Way We’ve Fought Jihadis? 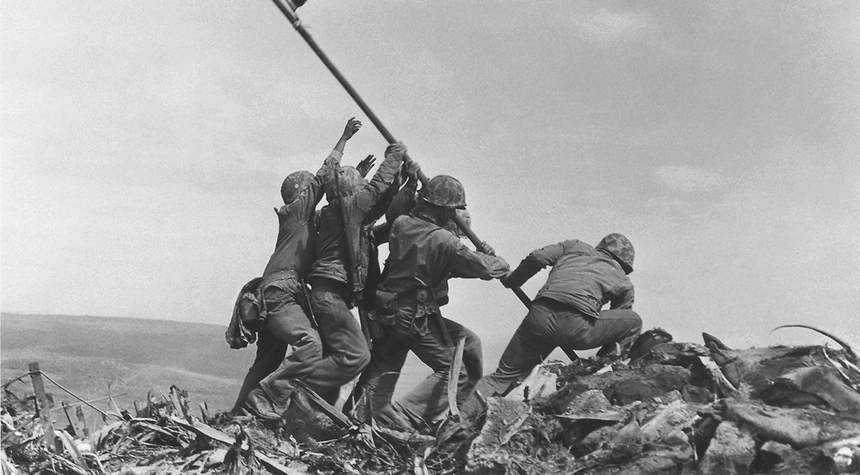 Imagine what the world might be like today if World War II had been fought the way the defense against the global jihad has been.

Imagine it is December 7, 1961, the twentieth anniversary of the Pearl Harbor attack, and people have grown weary of the war. President Adlai E. Stevenson (who swept into office promising a return to normal after the tumultuous Eisenhower years) gives what was then something new: a nationally televised address. He looks determinedly into the cameras and says:

My fellow Americans: On this day, as we remember the 2,403 lives taken from us at Pearl Harbor on this fateful day twenty years ago, I am reminded of the fundamental obligation of a President, which is to defend and protect America — not against threats of 1941, but against the threats of 1961 and tomorrow.

Yes, I confess it, I’ve cast poor Adlai here as something of a proto-Biden, for it was the current occupant of the Oval Office who recently said: “The fundamental obligation of a President, in my opinion, is to defend and protect America — not against threats of 2001, but against the threats of 2021 and tomorrow.”

The implication was clear. Jihad? Old Joe wants to say goodbye to all that. The threat of 2021, as he and members of his administration have made clear numerous times, comes from “white supremacists.” Now, you’re forgiven if you haven’t noticed “white supremacists” committing terror attacks around the country (if they did, what would they shout? “Robert Byrd Is Great”?). By “white supremacists,” Biden’s handlers mean the supportive environment that nourished the January 6 “insurrectionists” who weren’t insurrectionists; that is, ordinary, law-abiding Americans who supported Trump over Biden and take a dim view of the nose dive America has taken since Old Joe took office.

So: What if the America of 1961 were dealing with a situation similar to that of America today. Twenty years after a massive attack and still embroiled in a conflict with those who hold the same ideology as the attackers, but with leadership that is anxious to pretend that conflict is over and that a different one is upon us? The fictional President Stevenson might indulge himself with a victory lap:

As Nazi rule has returned to Berlin, I can’t say that I’m pleased as they parade around with $85 billion in American military hardware, or with the fact that Americans are still stranded in Berlin, but I must thank them for the fact that they have shown flexibility, and they have been businesslike and professional in our dealings with them.

Above all, twenty years into this fight, I am proud we have not given in to the temptation to demonize and stigmatize entire nations for the deeds of a few extremists. We have not succumbed to Germanophobia or Nipponophobia. The Germans are not our enemies. The Japanese are not our enemies. We are fighting against a tiny minority that holds to extremist ideologies, ideologies which have unfortunately hijacked the noble traditions of the Shinto religion in Japan and National Socialism in Germany. And we will prevail. But we will prevail hand-in-hand with the Japanese and German moderates who have been the first and most numerous victims of these extremists.

That’s why my administration is in consultations with representatives of the Council on Japanese-American Relations and the Nazi Poverty Law Center, and I have issued a proclamation declaring this twentieth anniversary of that terrible day a Day of Solidarity Against Germanophobia and Nipponophobia. We’ve mourned the loss of innocents on our battlefields in Wyoming and West Virginia, but groups like the Shinto and Nazi extremists know that they will never be able to defeat a nation as great and as strong as America. They’ve tried to stoke enough fear among us that we turn on each other and that we change who we are and how we live. And that’s why it is so important today that we reaffirm our character as a nation, by rejecting all hate and fear. That’s why I’m announcing today a significant increase in humanitarian aid to both Nazi Germany and imperial Japan…

I must apologize to Adlai Stevenson for putting this nonsense into his mouth. Democrats of his day were not quite so spectacularly insane as the current variety. But it really isn’t all that far off the mark. The official response of the United States to 9/11 has been more concerned about avoiding “Islamophobia” than facing the ideological roots of jihad activity realistically. Biden’s handlers really are planning to send aid to the Taliban, even after gifting them with billions in American military hardware.

Wrong analyses make for failed policies, and after thousands of American lives have been lost, and trillions of American dollars have been spent, the nation has essentially nothing to show for all this expenditure but a sharp and continuing loss of American power and prestige. The jihadis who struck the U.S. on September 11, 2001, have made such immense advances since then not because they are strong, or clever, or capable, but because we are weak, short-sighted, and resolute not in fighting them but in maintaining our denial about who they are and what they want, to the extent that we have taken numerous steps not to stop them, but actually to enable them to achieve their goals.

Twenty years after 9/11, the free West is dug in: wholeheartedly committed to denial, willful ignorance, and policies that are self-defeating to the point of suicidal. In light of that, the wonder is not that we are still facing a threat from the people who hit us twenty years ago, but that we have held out so long. Unless the political landscape changes considerably and this denial is decisively rejected and discarded, darker, much darker, days are coming.