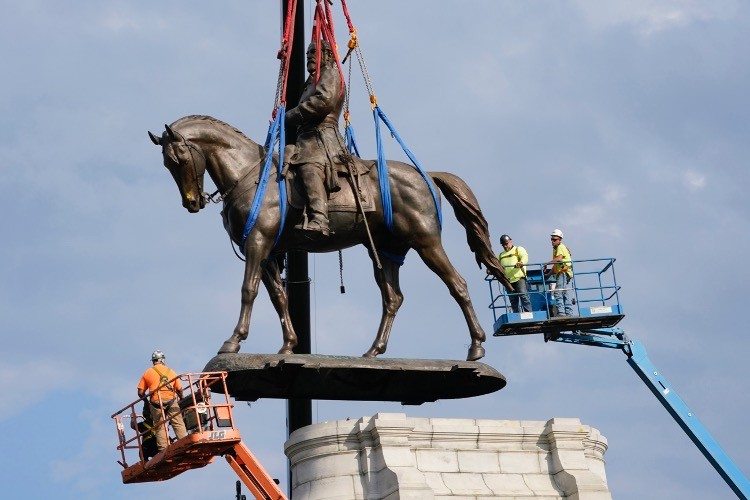 Symbolizing the Maoist and Taliban-like spirit of erasing history, they even removed the time capsule that had been in the base of the statue for 131 years, replacing it with one more “politically correct.” The new capsule included pictures from a Stop Asian Hate Protest rally and Black Lives Matter sticker.

The Lee statue was erected in 1890 in his honor by the Lee Monument Commission, led by Lee’s nephew, Fitzhugh Lee, who had served as governor of Virginia.

“This was a long time coming,” Governor Northam stated, “part of the healing process so Virginia can move forward and be a welcoming state with inclusiveness and diversity.” He added that the Lee statue represented “400 years of history that we should not be proud of.” One wonders if Northam is proud of his own past, one that includes appearing in blackface in his college yearbook.

In taking the statue down, workers cut Lee in half at the torso. The bifurcated remains will be sent to a women’s prison temporarily until officials decide which organization should take permanent possession of it. Several private citizens and museums have expressed interest in the statue.

Northam’s remarks and the media reports demonstrate either abysmal ignorance of the real Robert E. Lee or a total disregard for the truth. For example, the Daily Mail began its story of the episode by calling Lee “a prominent slaveowner.”

In court, a person is sworn to tell the whole truth because telling just part of the truth can give a false impression. This is certainly the case with Lee.

First of all, the attack upon Lee is based upon a faulty understanding of the Civil War and Lee’s role in the war. The common misconception is that the national debate over the institution of slavery had become so intense that Northern states and Southern states opted to just settle the controversy on the battlefield. In other words, the Civil War was fought to abolish slavery, and the losing side — the Confederacy — was fighting to keep slavery.

Without getting into all of the nuances of the onset of the Civil War, seven Confederate states seceded in late 1860 and early 1861, leaving a majority of the states where slavery was still legal still in the Union. One would think if the war was fought to simply abolish slavery, then all 15 states that had laws supporting the legality of slavery would have also seceded — and would have been invaded, whether they seceded or not.

The secession of seven southern states did not automatically mean there would be a civil war — over slavery, the tariff, or anything else. President Abraham Lincoln made a choice to call for 75,000 volunteers to “suppress the rebellion” in those seven states. Had he been initiating the war in order to abolish slavery, he would have called for volunteers to invade all 15 slave states, but he did not. Lincoln wrote, “My paramount object in this struggle is to save the Union, and is not either to save or to destroy slavery.” Congress later passed a resolution to emphasize that the war was not being prosecuted to end slavery — neither in the slave states that had left the Union, nor in the slave states that remained in the Union.

But Lincoln’s call for an invasion of seven states did cause four more states to join the seven in leaving the Union, including Lee’s home state of Virginia. Lee resigned his commission in the Army rather than take up arms against his home state. Had Virginia not joined the Confederacy, Lee would not have joined the Confederate army.

He certainly did not join the Confederacy in order to keep his slaves. Writing that Lee was a prominent slaveowner leaves the impression that Lee supported slavery, which is not true.

Northern men signed up to save the Union, not to destroy slavery. Why did southern soldiers sign up? Only a tiny minority of the men who donned the Confederate gray owned any slaves at all. The reason they fought was because Union soldiers invaded the South. Had they not invaded the South, there would have been no war. One can argue whether it was prudent for the South to secede, or whether the North was justified in its invasion, but the bottom line is that the war was not fought to abolish slavery.

Yet, Lee is regularly condemned as fighting to preserve slavery. The truth is that Lee denounced slavery before the war even began. In a letter to his wife from Camp Brown in Texas, written in 1856, Lee described his feelings about slavery. “I believe,” Lee wrote, “in this enlightened age, there are few who will not acknowledge that slavery as an institution is a moral and political evil.”

So, was Lee a slaveowner? Here is the truth, for those who actually care to hear it. Lee inherited slaves from his father-in-law’s estate in a will that made it practically impossible for them to be immediately freed. The will provided that the slaves would be freed after all of the estate’s debts were paid off. “The immediate trouble,” Douglas Southall Freeman wrote in his multi-volume biography of Lee, “was that Mr. Custis [Lee’s father-in-law] left more than $10,000 of debt and virtually no money with which to operate the estate.”

Lee could have sold the slaves to pay the debt, but he refused to take an action that would leave the slaves in bondage. But as soon as he could do so, he freed his slaves, on December 29, 1862, pronouncing them “forever set free.”

Simply saying that Lee was a “prominent slaveowner,” without putting that statement into its proper context, is either ignorant or duplicitous.

But, as with the Cultural Revolution in China under the murderous dictator Mao Tse-tung, or with the Taliban in Afghanistan, the imposition of a view of the past that excludes certain pertinent facts is to be expected. Those who agitated for the removal of the Lee statue are not finished. The Southern Poverty Law Center has a list of about 2,000 “symbols” standing across the United States that need to be removed.

The goal is not so much the removal of statues as it is the re-writing of American history to advance the cause of Marxist revolutionaries. As such, it is necessary to distort the past so as to pave the way for a socialist future.