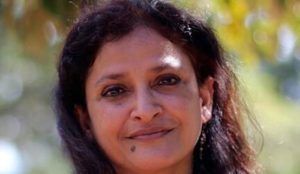 Ben & Jerry’s board chairwoman isn’t your average corporate suit. A social justice warrior who’s now under increased scrutiny in the wake of the company’s announcement that it will boycott Israel’s West Bank and East Jerusalem, she has a lengthy history of left-wing activism that includes publishing columns defending Hezbollah and supporting U.S. funding to Hamas.

Anuradha Mittal, the leading force behind the ice cream company’s decision to stop selling its products in parts of Israel, founded the Oakland Institute, which describes itself as an “independent policy think tank,” in 2004 and serves as its executive director. The group has published articles defending Hezbollah and Hamas, terrorist groups that seek the destruction of the Jewish state.

Ben & Jerry’s is under increased scrutiny for its decision to join the anti-Israel boycott movement, which follows criticism over the ice cream maker’s partnership with anti-Semitic figures during the Women’s March in 2018. At the time, the company defended its work with Linda Sarsour, one of the march leaders who was ousted for anti-Semitism. Multiple state and local governments, including Texas and Florida, are considering sanctioning Ben & Jerry’s and its parent company, Unilever, over the boycott decision.

Mittal published an article written by Green Party Senate candidate Todd Chretien during the Israel-Lebanon war in 2006 arguing that progressives should support Hezbollah.

“You do not have to agree with all of Hezbollah’s ideas to support their resistance to Israel,” wrote Chretien. “Condemning ‘both sides’ in the Middle East is just like condemning ‘both sides’ in the American Civil War. During the Civil War, with all its complications, one side fought for slavery and the other fought for emancipation. Today in the Middle East, one side fights to rob and pillage, the other seeks self-determination and dignity.”

Chretien added that Hezbollah’s actions would encourage militants who were fighting U.S. soldiers in Iraq.

“Hezbollah has emerged as the hero to millions of Arabs and Muslims. Hezbollah’s fight will encourage the resistance in Iraq and it will give a boost to opposition forces in Egypt, Jordan and other American client states,” he wrote.

In a “policy brief” published the same year, Mittal expressed concern that the U.S. government would cut off funding to the recently elected Hamas government, which had just won control of Gaza.

“The U.S. has threatened to sever humanitarian aid to the people of Palestine for exercising their right to vote,” wrote Mittal. She argued that this decision would end up “bankrupting” Hamas, which had “assured the international community that all aid revenues will be used on salaries, daily lives, and infrastructure.”

Other articles published by the Oakland Institute claimed that Israel’s strike on Hezbollah was part of a years-long plan to “allow the Cheney/Rumsfeld war party to once again take control” and argued for “a voluntary and sensitive integration of Hezbollah into a reformed, viable Lebanese political arrangement.”…

EXCERPT: "On 19 July 2021, it was announced that Ben & Jerry's plans to boycott "the Occupied Palestinian Territory," generally presumed in this context to mean West Bank settlements and Jewish neighborhoods of east Jerusalem. However, Anuradha Mittal, chairwoman of Ben & Jerry's Independent Board of Directors, said: "The statement released by Ben & Jerry's regarding its operation in Israel and the Occupied Palestine Territory does not reflect the position of the Independent Board nor was it approved by the Independent Board." In fact, the Ben & Jerry Board wanted to boycott Israel entirely, but was stopped from doing so by Unilever. Avi Zinger, CEO of Ben & Jerry's Israel, the franchisee in Israel since 1987, said he was unwilling to refuse to sell the ice cream to Israeli citizens in settlements and was legally prevented from doing so. In consequence, the company plans not to renew the franchise in 2022. The decision may also run foul of anti-boycott of Israel laws in place in many US states."

Why the “woke” ice cream company deserves to be frozen out.

“Ben & Jerry’s, a leading socially responsible international company, is finally bringing its policy on Israel’s regime of oppression against Palestinians in line with its progressive positions on Black Lives Matter and other justice struggles,” BDSmovement.net tweeted. “We hope Ben & Jerry’s has understood that, in harmony with its social justice commitments, there can be no business as usual with apartheid Israel.”

Adalah Justice Project, a U.S.-based pro-Palestinian advocacy group, tweeted, “This BDS win is because of our people power. Thank you Vermonters for Justice in Palestine, Movement for Black Lives, and all the organizers behind this win. Our demand remains a complete disengagement from all business dealings with apartheid Israel. We applaud @benandjerrys decision to end business in the settlements. Israel a settler colonial state from the river to the sea. We won't rest.”

Mittal’s own soul, if she has one, is filled with hate for the Jewish state. “The catastrophe continues,"  this anti-Semite tweeted on May 15, 2018. "#Nakba70 years later    #palestine bleeds    Boycott Divest Sanctions #israel,”

The Coalition for Jewish Values has organized an online petition on Change.org to boycott Ben & Jerry’s ice cream products.

The “woke” company also slow-walked its response to the inhumane conditions under which migrants, many of them in the country illegally, toiled at dairy farms supplying Ben & Jerry’s with milk.