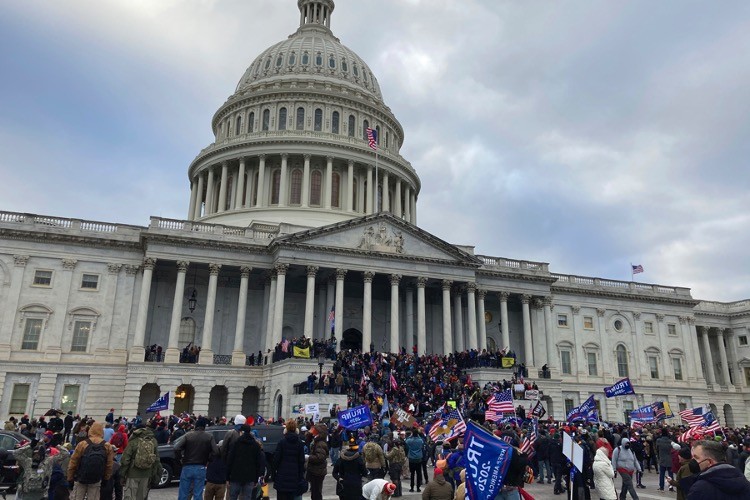 More than six months after The Great Insurrection of January 6, when citizens trespassed in the Capitol Building after President Trump’s peaceful rally to draw attention to what many say was clear election fraud, Democrats are still milking that day for all they can. And — as two current cases show — those involved still face severe penalties even as many of them await their fate while imprisoned in conditions almost anyone would find unacceptable.

Joseph Hackett is an unassuming 50-year-old chiropractor from Sarasota, Florida. He is a husband and father. He is also accused of spending a whole nine minutes trespassing inside the Capitol Building on January 6. And for that act of non-violent disobedience, he was arrested on May 28 and has spent the last two months in a cell 23 hours a day as he awaits trial. His wife, Deena, and their 11-year-old daughter may lose their home and the family business.

Oh, and Hackett faces up to 20 years in prison.

How does an unassuming chiropractor wind up in solitary confinement and facing a 20-year prison sentence while his wife and child face losing everything? Well, for Hackett, that journey began in the summer of terror in the wake of the death of career criminal and BLM poster child George Floyd. As Antifa and BLM burned and pillaged their way through more than 200 cities in this once-great nation, Hackett became justifiably concerned.

His wife told The Gateway Pundit, “When they were rioting after the death of George Floyd death, some of them came behind our house, broke into a jewelry store. We could hear them yelling, shooting and looting. My daughter and I were both scared for our lives.” And so, “Joe decided he was going to protect us with Oath Keepers and formed a neighborhood watch.”

And like so many other Americans, Hackett had never been political before all of the events of 2020. His wife said, “That’s when he started paying more attention to the news and diving deeper into what was really happening in the country. He had never even voted in his life.” She added, “This was the first election he ever voted for. Now, he’s being tortured.”

Another Florida man has the dubious honor of being the first Capitol Insurrectionist to be convicted of a felony. Paul Hodgkins, 38, from Tampa, was arrested on February 16. His arrest likely came so early because he actually took a selfie in the Senate chamber and posted it to social media. Hodgkins, a crane operator by trade, is also an Eagle Scout who regularly volunteered at a food bank, despite the fact that he lives in a section of Tampa known for its poverty.

Hodgkins apologized to the court for his actions on January 6, saying he had traveled alone to Washington, D.C., and had no knowledge that anyone planned to enter the Capitol Building that day, but got caught up in the moment. He also said, “This was a foolish decision on my part that I take full responsibility for,” adding, “I do not nor will not make any excuse.” He said his apology was “not because I face the consequence, but because of the damage that day’s incident caused, the way this country that I love has been hurt.”

Because he plead guilty to obstruction of an official proceeding and aiding and abetting, a litany of other charges were dropped and though he faced a possible sentence of 20 years, Hodgkins was given a sentence of eight months in prison with two years of supervised probation to follow his release.

Hodgkins’ sentence may serve as a benchmark for what Hackett and the other nearly 550 “insurrectionists” who have been charged can expect when their trials finally come up. All those poor souls who — like Hackett and Hodgkins — got caught up in a moment and made a stupid and regrettable choice are going to face prison time, probation afterward, and be branded for the rest of their lives as “insurrectionists” who threatened the very foundation of this country. All for being someplace they weren’t supposed to be — i.e., for trespassing.

This is very different from the way another — more recent — episode of protesting while trespassing in the Capitol Building is being treated. On July 15, Representative Joyce Beatty (D-Ohio) — who chairs the Congressional Black Caucus — led a group of about 20 protesters to breach the confines of the Hart Senate Office Building and stage a demonstration. They were protesting the Senate’s Republican-led filibuster of the For the People Act and the John Lewis Voting Rights Act.

Wait — that sounds a lot like what the so-called insurrectionists did. They were engaged “in a demonstration in an area where it is otherwise unlawful to demonstrate.” And to be clear, section (b)(2) defines “demonstration,” saying, “For purposes of this subsection, the term ‘demonstration’ means marching, congregating, standing, sitting, lying down, parading, demonstrating, or patrolling by one or more persons, with or without signs, for the purpose of persuading one or more individuals, or the public, or to protest some action, attitude, or belief.” So, yes, that sounds an awful lot like what happened on January 6.

So, what fate did Beatty suffer for her crime? Was the poor, downtrodden federal legislator and esteemed leader of both the Black Caucus and this “insurrection” tossed into solitary confinement for 23 hours a day while awaiting a lengthy prison sentence? Alas, no. She was almost immediately released and then went on a media tour to parade her bravery for this act of civil disobedience.

In fact, her media parade started even as she was being arrested: A tweet from her account shows her being zip-tied and taken into custody. That tweet was sent 15 minutes after her arrest — almost as if the arrest were planned in advance as a publicity stunt.

The day after her arrest, Beatty told SiriusXM Urban View’s The Joe Madison Show that her arrest is an example of “disparities of treatment.” By that, she meant that she — and other black people — are treated less fairly than white people. Given the details, it is evident that Beatty is either deranged or thinks others are. Because there is no version of her arrest that shows what she claims.

Furthermore, unlike Hodgkins — who owned his guilt and showed remorse for his actions — Beatty is recalcitrant and unrepentant. She tweeted, “You can arrest me. You can’t stop me. You can’t silence me.”

She also tweeted, “And I’d do it again.”