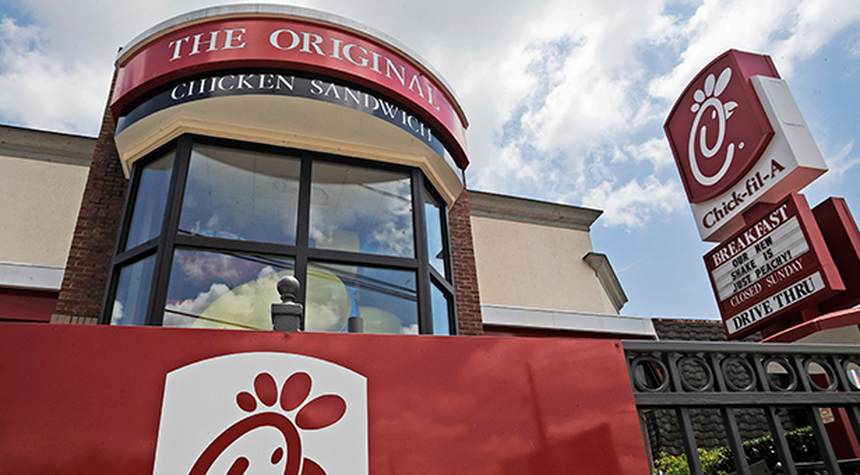 Take Chick-fil-A, for example. Back in 2012, LGBT activists targeted Chick-fil-A for a “kiss-in,” to protest the fast-food joint’s stance defining marriage as being between one man and one woman. At the time, outlets like Forbes reported that Chick-fil-A had given about $5 million to “anti-gay marriage groups since 2003.” Chick-fil-A’s crime? Supporting conservative nonprofits like the Family Research Council (FRC) and Exodus International, which offered therapy for people to overcome unwanted same-sex attraction (often demonized as “conversion therapy”).

The WinShape Foundation had given $1,000 to FRC, which the far-left smear factory the Southern Poverty Law Center (SPLC) had branded an “anti-LGBT hate group” and placed on a map with the Ku Klux Klan. Liberal news outlets like HuffPost cited the SPLC’s accusation that FRC is a “hate group,” and many branded the fast-food chain “Chick-fil-hate.” The backlash mounted after CEO Dan Cathy defended marriage as between one man and one woman. LGBT activists called a boycott.

A deranged man named Floyd Corkins targeted FRC for a terrorist attack. He stormed the headquarters with a nine-millimeter handgun and a bag of Chick-fil-A chicken sandwiches. Thanks to the bravery of security guard Leo Johnson, Corkins failed to carry out his planned massacre, but he did seriously wound Johnson. He later told the FBI he targeted FRC because of the SPLC’s “hate group” accusation. He also revealed his plan to smear the chicken sandwiches into the faces of FRC staff after he had killed them.

Corkins pled guilty to terrorism charges and was sentenced to 25 years in prison.

The SPLC did not remove FRC from its “hate group” list after the attack. In fact, as I explain in my book Making Hate Pay: The Corruption of the Southern Poverty Law Center, the SPLC cleaned house at the top following a devastating scandal in which employees complained about racial discrimination, sexual harassment, and a cynical hate-for-pay fundraising “scam.” The SPLC had also used its “hate group” accusations to silence political opponents, like FRC.

Meanwhile, Christians across the country rallied to Chick-fil-A for a “Chick-fil-A Appreciation Day” led by former Gov. Mike Huckabee (R-Ark.), driving sales through the roof. Even so, the company apologized for its comments and the WinShape Foundation stopped funding most of the “anti-gay” organizations, including FRC.

Then something instructive happened. Leftist activists did not stop attacking Chick-fil-A. Instead, they slammed the fast food joint for donations to apolitical Christian organizations like the Salvation Army and the Fellowship of Christian Athletes — because these groups hold their employees to Christian standards of sexual morality. In 2018, Twitter CEO Jack Dorsey was forced to apologize after eating Chick-fil-A in June, the designated LGBT Pride Month.

While Chick-fil-A faced airport bans in 2019, the fast-food chain had risen to become the fastest-growing restaurant chain in the nation. Known for good food, excellent service, and closing on Sundays to honor the Sabbath, it is both a natural fit for Christians and a great alternative to McDonald’s. Yet LGBT activists shut down the first Chick-fil-A in Britain.

On Monday, a New York City assemblyman protested after Chick-fil-A had been approved to open a concession for the New York State Thruway. Notre Dame students and faculty wrote an open letter urging the university’s campus dining organization to exclude a Chick-fil-A location because the fast food chain has a “long history” of donations to “queerphobic groups.” The students cited the far-left LGBT activist group the Human Rights Campaign (HRC), which gave Chick-fil-A a “0” on its Corporate Equality Index.

The mention of HRC seems particularly noteworthy in this context. HRC is very similar to the Family Research Council, just on the opposite side of LGBT issues. While FRC promotes a Christian understanding of marriage and family, HRC aggressively pushes the LGBT agenda.

Yet companies bow and scrape to get in HRC’s good books, while they wouldn’t get caught dead giving a measly thousand bucks to the notorious “hate group” FRC. In fact, I routinely see fast food joints that proudly advertise the fact that part of the proceeds of every sale goes to the Human Rights Campaign as if HRC were not egregiously antagonistic to the religious views of millions of Americans. In fact, HRC aggressively pushes the Orwellian Equality Act, which explicitly guts the 1993 Religious Freedom Restoration Act.

I fail to see why Chick-fil-A has to bow and scrape to the LGBT activists who are intent to find any excuse to destroy this excellent fast-food chain. Chick-fil-A stopped funding “anti-LGBT” political groups, but LGBT activists doubled down on their cancel culture attempts against it.

It is high time for Chick-fil-A to earn the negative reputation it unjustly has among LGBT activists. The Family Research Council is not a hate group, any more than the Human Rights Campaign is a hate group. Christians know it. LGBT activists know it. The Southern Poverty Law Center knows it.

Perhaps Chick-fil-A should announce that it will proudly give 5 percent of the proceeds of every chicken sandwich it sells to the Family Research Council. If the LGBT activists are going to mobilize to put this fine establishment out of business anyway, it might as well do the very thing that hundreds of other restaurants do on the opposite side of the aisle.

I make this suggestion tongue-in-cheek, of course. I’d rather businesses kept out of politics altogether — a business’s duty is to reward its shareholders by providing excellent goods and services at marketable prices. Chick-fil-A makes delicious chicken sandwiches and provides them with wonderful service. That should be more than enough.

But so long as a horde of activists is going to keep trying to put Chick-fil-A out of business, the company might as well do something to actually help the cause of the family. Maybe WinShape should once again fund FRC and give it far more than a measly thousand bucks.