Convicted terrorists, some linked to ISIS and al-Qaeda, lead religious services at a third of US federal prisons

This is madness, fueled by the persistent fantasy that Islam is a religion of peace. U.S. prisons, like prisons in Britain, are allowing for jihad recruitment, and Americans will be paying the price. 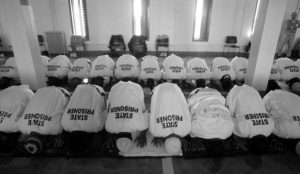 “Islamic terrorists lead religious services in a quarter of federal prisons: inspector general report,” by Greg Piper, Just the News, July 8, 2021 (thanks to The Religion of Peace):

Inmates convicted on terrorism-related charges or with “known connections to terrorist organizations,” including the Islamic State, al-Qaeda and al-Shabaab, were allowed to lead religious services at a third of the federal prisons audited by a federal watchdog, raising deep security concerns.

A recent audit by the Justice Department’s inspector general of the Chaplaincy Services Program in the Federal Bureau of Prisons found four out of 12 facilities in which terrorist inmates were eligible to lead religious services.

At three of the facilities, the prisoners were affiliated with Islamic terrorist groups, with at least two leading services “on a regular basis” or a “frequent basis.” One of them was chosen to lead services by other inmate coreligionists “due to his extensive faith knowledge and Arabic fluency.”

The July report blamed the absence of a “fully-staffed and diverse chaplaincy” for such lapses: The 236 chaplains are about 30 percent below BOP targets. This prompted many institutions to “turn to alternatives such as inmate-led services and heavy reliance on contract faith providers and minimally vetted volunteer faith providers to fill the gaps in the chaplaincy staff. These staffing shortages and alternatives present risks.”

BOP policies don’t restrict “certain inmates from leading services and appear to be inconsistent regarding the level of required monitoring,” the report states. It found only one chaplain who “reportedly took preemptive action to prevent a known terrorist from leading religious services.”

Chaplains told IG staff they let prisoners choose their own faith leaders “to avoid complaints, lawsuits, or the rejection of leaders that would otherwise be selected by BOP staff.”…