Rabbi Stabbed Outside Shaloh House Synagogue In Brighton; Suspect Is In Custody

Jihad? Islamic anti-Semitism? Possibly. But in any case there is no doubt that the rise in anti-Semitism is tied to the Left’s increasingly virulent anti-Israel rhetoric. 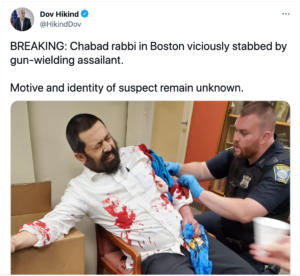 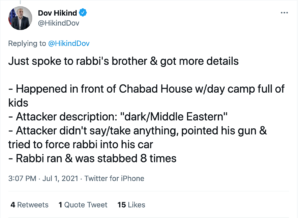 On Thursday afternoon in Boston, a man named Khaled Awad, 24, approached Shaloh House, a synagogue and school where a children’s day camp was being held. There he encountered Rabbi Shlomo Noginski, who was sitting on the school’s steps and talking on the phone. Awad pulled out a gun and demanded that Noginski hand over his car keys, and also told Noginski to get into the car. Instead, Noginski ran across the street into Brighton Common park. Awad followed and stabbed Noginski eight times; the rabbi is in stable condition in a nearby hospital.

According to WCVB, “Investigators said the motive of the stabbing was not immediately clear,” but there are actually quite a lot of clear clues.

Around the time of the recent conflict between Hamas and Israel, Palestinian Muslims and their supporters committed acts of violence against Jews and supporters of Israel all over the United States. In New York City, a Muslim mob screaming “Allahu akbar” attacked a Jewish man in midtown Manhattan. Also in Manhattan, Palestinians threatened violence and screamed anti-Semitic slurs at Jews. One threw a mini-firebomb. Pro-jihad protesters stormed a restaurant and spat on Jewish patrons; one of the thugs threw a bottle. A Muslim, Waseem Awawdeh, was arrested for viciously beating a Jew in Times Square.

In Los Angeles, Palestinian protesters asked people dining at the Sushi Fumi restaurant if they were Jewish, and proceeded to attack them with knives. Elsewhere in Los Angeles, two cars festooned with Palestinian flags chased a Jewish man down a street as he was leaving his synagogue.

In Florida, a van also bearing a Palestinian flag and emblazoned with the slogan “Hitler was Right” drove past a pro-Israel demonstration.

In Skokie, Illinois, a pro-jihad vandal wearing an Arab headdress smashed a synagogue window and left a Palestine flag and a pro-jihad sign inside.

Was Khaled Awad moved by the same rage and hatred of the State of Israel to stab Rabbi Shlomo Noginski? We may never know for sure, especially if the answer doesn’t fit the establishment media narrative, but there is no reason to discount the possibility. For years, Palestinian jihadis have garnered support all over the world by means of victimhood propaganda featuring fabricated atrocities that are designed to stoke rage against Israel and to justify violence against its civilians and supporters.

Could that have had something to do with why a man sitting on the steps of a school and talking on his phone in Boston would suddenly become the victim of a violent assault? Of course.

There is another, and related, possible motive as well: the deeply-rooted and yet still largely unrecognized anti-Semitism of the most sacred text of Islam. Did Khaled Awad read the Qur’an’s words about the Jews being the strongest of all people in enmity toward the Muslims (5:82)? The Qur’an also says that the Jews fabricate things and falsely ascribe them to Allah (2:79; 3:75, 3:181); they claim that Allah’s power is limited (5:64); they love to listen to lies (5:41); they disobey Allah and never observe his commands (5:13). They are disputing and quarreling (2:247); hiding the truth and misleading people (3:78); staging rebellion against the prophets and rejecting their guidance (2:55); being hypocritical (2:14, 2:44); giving preference to their own interests over the teachings of Muhammad (2:87); wishing evil for people and trying to mislead them (2:109); feeling pain when others are happy or fortunate (3:120); being arrogant about their being Allah’s beloved people (5:18); devouring people’s wealth by subterfuge (4:161); slandering the true religion and being cursed by Allah (4:46); killing the prophets (2:61); being merciless and heartless (2:74); never keeping their promises or fulfilling their words (2:100); being unrestrained in committing sins (5:79); being cowardly (59:13-14); being miserly (4:53); being transformed into apes and pigs for breaking the Sabbath (2:63-65; 5:59-60; 7:166); and more. They are under Allah’s curse (9:30) and Muslims should wage war against them and subjugate them under Islamic hegemony (9:29).

Combine that with the vicious Palestinian victimhood propaganda against Israel, and you have a lethal mix. When one believes that Jews are accursed and that one has a divine command to war against them, it becomes far easier to accept all that victimhood propaganda and to begin to see Jews as the focus and source of all the evil in the world.

Khaled Awad may not believe any of this. But the worst aspect of the aftermath of this attack is that investigators may never explore this possibility at all since it conflicts with multiple assumptions of the reigning Leftist orthodoxy. And that will only help ensure that something like this will happen again, and again, and again.

Boston: Muslim who stabbed rabbi had overstayed student visa, is in US illegally