Trump’s policies of not financing the “Palestinian” jihad, strongly supporting Israel, and opening the way for Israel to make pragmatic accords with some neighboring Arab countries worked. Biden’s handlers, however, are enabling the latest jihad activity, and appear willing to sacrifice untold lives to the effort to save face. 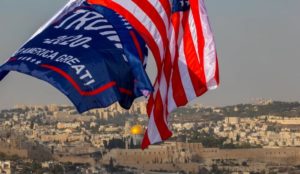 “Letter signed by 73 House Democrats calls on Biden to reverse Trump’s pro-Israel policies,” i24News, June 25, 2021 (thanks to the Geller Report):

A letter signed by 73 Democrats in the US House of Representatives calls on US President Joe Biden to “reverse” the Trump administration’s pro-Israel policies, including his peace plan to resolve the Israeli-Palestinian conflict.

The letter, sent to the White House on Wednesday, urges to Biden to refer to Israeli settlements as illegal under international law and to Gaza and the West Bank as “occupied” in official US documents and communications.

“We urge you to reverse the previous administration’s abandonment of longstanding, bipartisan United States policy,” the letter states.

Signatories to the letter include seven committee chairs and seven Jewish Democrats, including Rep. Jan Schakowsky of Illinois, who initiated it along with representatives Gerry Connolly of Virginia and Peter Welch of Vermont.

Liberal pro-Israel group J Street thanked the House Democrats for the letter in a statement….