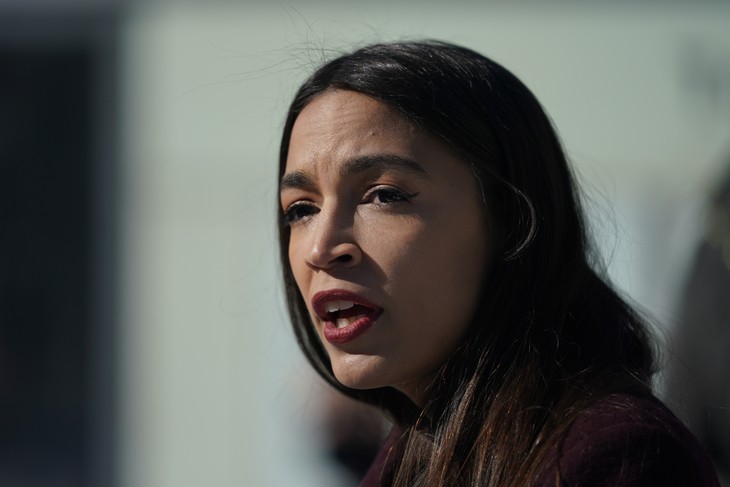 When Representative Alexandria Ocasio-Cortez presents her ideas, I am often reminded of oral book reports in junior high when it is clear your classmate never read the book. Perhaps you can recall the launch of her Green New Deal proposal. It was so amateurish and gave away the plot to such an extent that her staff removed the Frequently Asked Questions from the internet. Unfortunately, her team of youngsters didn’t understand that the internet is forever.

Then there was the flub from her former chief of staff, Saikat Chakrabarti. In a meeting with former Democratic presidential candidate Jay Inslee’s climate director, Sam Ricketts, Chakrabarti said:

As if the fact that this is all just a massive wealth redistribution scheme wasn’t always obvious. Now, Ocasio-Cortez is unveiling her latest plan for a guaranteed government union jobs plan and more government intervention in the economy. She and Senator Ed Markey (D – Mass.) have introduced a bill to create a Civilian Climate Corps. This plan is reminiscent of the establishment of organizations such as the Tennessee Valley Authority (TVA) under President Franklin Roosevelt’s New Deal.

The TVA was supposed to provide jobs after the Great Depression and function as a federally owned electric utility and regional economic development agency. It still exists today and remains a weird anomaly that is neither government-owned nor subject to the laws and regulations of a private company, even though it receives government subsidies. In 2009 the Cato Institute noted:

It [the TVA] was heralded as a program to build dams that would control floods, facilitate navigation, lift people out of poverty, and help America recover from the Great Depression. Yet the reality is that the TVA probably flooded more land than it protected; much of the navigation it has facilitated involves barges of coal for coal‐​fired power plants; people receiving TVA‐​subsidized electricity have increasingly lagged behind neighbors who did not; and the TVA’s impact on the Great Depression was negligible. The TVA morphed into America’s biggest monopoly, dominating an 80,000 square mile region with 8.8 million people—for all practical purposes, it is a bureaucratic kingdom subject to neither public nor private controls.

As Milton Friedman once said, “Nothing is so permanent as a temporary government program.” The TVA should have been privatized decades ago but remains in limbo. Now Ocasio-Cortez and Markey want to create another jobs program, and she invokes the unemployment rate.

The economic impact of the pandemic was solely due to government-mandated shutdowns. In states that did not close, the unemployment rate is under 3%. Of the states that reopened early and cut the enhanced unemployment, most are in the 4% range. Nationally, it is 5.8%. In the month President Barack Obama was reelected in 2012, it was 7.7%. Unemployment is not a national crisis.

There are reportedly 9 million jobs that employers can’t fill while Democrats pay people to stay home. Enhanced unemployment insurance is still paid and the new welfare payment of $250-$300 per child is also in play. Ocasio-Cortez talks about people moving into permanent unemployment as if they do not have options. It is quite the opposite. Many are choosing to stay home.

During the discussion, she makes some claims that are so absurd it took me a while to stop laughing. She actually looked serious discussing the “generational dynamic,” saying she would be remiss if she didn’t discuss it. Millennials really have a heightened sense of their own victimhood.

Hilariously, Ocasio-Cortez says the last time they saw a booming economy was in the 1990s. Weird, because her generation had record real wage growth and record rates of new home purchases. It also experienced the lowest unemployment across every demographic in decades during the run-up to January 2020. She has to know she is just lying.

Then she listed the many ways millennials have had it unusually rough. There was the pretty short-lived dot-com bubble, all things considered. Then she invoked 9/11, followed by a decade of war. And, of course, the looming climate crisis. Except it is not a crisis. The Intergovernmental Panel on Climate Change projects that by 2100 the world will lose a small percentage of GDP. However, by then GDP will be much larger, minimizing the impact. Displacement of people is also able to be reduced through appropriate mitigation steps.

Baby boomers lived through Vietnam and the social upheaval of the 1960s. No one drafted a millennial to go to wars. Boomers also fixed smog with the advent of the catalytic converter. Gen X voters lived through global warming, global cooling, global food shortages, the coming ice age, acid rain, the disappearing ozone layer, and killer bees, to name a few.

The biggest crisis was the directive to stop using aerosol hairspray and find a new coolant for refrigerators and air conditioning units. At least one ended up being positive, as the big hair of the 1980s went away. The world was supposed to have reached the point of no return at least three times before I turned 40. It didn’t, and for genuine problems, we innovated our way out of them. Even Gen Z is too cynical to buy into most of this. The only people she’s scaring are her indoctrinated peers.

Recommended: Biden BLM Nominee ‘Collaborated With Eco-Terrorists’ in the 1990s

She invokes $250,000 student loan debt. A tiny fraction of the population racks up such debt. If she did, maybe she should have stuck with the sciences. She reportedly won awards for science projects in high school. Instead, she dove headlong into a degree that yields a significant share of baristas. Now she sits in Washington, eager to spend your tax dollars on a program we don’t need and that won’t address whatever environmental problems we may have. The latter will require skilled scientists and engineers, not a bunch of unionized government employees planting trees.

Ocasio-Cortez’s bright idea is to shove two early 20th century ideas, unions and government jobs programs, on a 21st-century economy. But, one could ask, what is at all “progressive” about that?

LISTEN to Alexandria Ocasio-Cortez’s insanity yourself: