Despite the societal maladies associated with unvetted Muslim migration, including no-go zones, surges in crime, rape gangs, jihad threats, jihad preaching and the like, Pope Francis is a foremost defender of facilitating illegal Muslim migration. He has now renewed his call for “tearing down the walls of indifference” toward migrants but appears indifferent to the multitudes who have fallen victim to many of the migrants. The Pope zeroed in on a shipwreck that claimed the lives of 700 African migrants who willingly tried to cross over illegally into Europe. Many of these ships are operated by people smugglers; this particular ship was “skippered by Mohammed Ali Malek, a member of a network of Libyan people smugglers, who received a jail sentence of 18 years for multiple charges of manslaughter.” The Pope wants to see any and everyone be given a big welcome into the EU no matter who they are, all while he remains secured behind the walls of the Vatican and under tight security when he leaves.

Pope Francis has also said such things as “migrants are like Jesus, forced to flee” and “migrants are warriors of hope.” He compared populists to Hitler for trying to protect their sovereign borders while calling for open doors to ALL migrants. He has also called for the “establishment of pathways” for hundreds of thousands of Muslim migrants to settle in Europe. 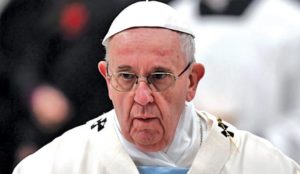 ROME, Italy — Pope Francis has called for people to become “more supportive” in welcoming migrants trying to cross the Mediterranean Sea from Africa into Europe.

Following his weekly Angelus address in Saint Peter’s Square Sunday, the pope remarked on a ceremony taking place in Augusta, Sicily, to welcome the arrival of the remains of the boat from the massive shipwreck of April 18, 2015 that claimed the lives of some 700 African migrants.

“May this symbol of so many tragedies in the Mediterranean Sea continue to challenge everyone’s conscience and foster the growth of a more supportive humanity, that tears down the wall of indifference,” the pontiff told the crowds.

“Let us think: the Mediterranean has become Europe’s largest cemetery,” he said.

Only 28 people survived the 2015 shipwreck, skippered by Mohammed Ali Malek, a member of a network of Libyan people smugglers, who received a jail sentence of 18 years for multiple charges of manslaughter.

As captain of the vessel, the 27-year-old Malek, a Tunisian, reportedly caused the disastrous collision with a Portuguese ship that had come to its rescue, which led to the shipwreck.

The BBC noted that Malek followed “the regular procedure for migrant boats making the long crossing,” namely, to place a distress call with the Italian coast guard in Rome asking for rescue once the vessel was in international waters.

In those years, the Italians’ willingness to provide a free shuttle service to migrants provided an incentive to many to undertake the perilous journey, causing the deaths of thousands.

In 2017, Frontex, the border control agency of the European Union (EU), released a report revealing that NGOs had been complicit with human traffickers by offering a taxi service from North Africa to Italy.

The Italian prosecutor, Carmelo Zuccaro, said at the time that whether or not the organizations in question are operating out of philanthropic motives, “the facilitation of illegal immigration is a punishable offense regardless of the intention.”

Migrant sea deaths in the Mediterranean did not begin falling until 2018, following the election of a center-right government with stricter immigration policies.

According to a report at the time from the Italian daily La Verità, “the Salvini method works,” referring to border controls by interior minister Matteo Salvini, who had insisted that open ports fuel human trafficking and encourage migrants to undertake dangerous sea crossings.

There had been no solution under the former Matteo Renzi government, the newspaper noted, since he tried passed the buck to the European Union and wrung his hands when the EU did absolutely nothing to resolve the problem…..