‘By Allah, this is unbearable’: Palestinians suffer ‘humiliating’ wait at post office to collect pay-for-slay checks

Westerners who have been raised to value life do not generally comprehend the culture of death in the Palestinian territories, where young people are taught to believe that their jihad is a religious duty. Many Westerners comfort themselves by thinking that it is only a few among them who believe this, because they feel “oppressed.” If it really were only the few, there would be an outcry against the love of death in these areas, but there isn’t.

“It is the worst thing for the families of the prisoners and martyrs. They are like beggars. I went from 8 a.m., just imagine, I stayed until 3 p.m., and I presented my identity card and did not receive the prisoner’s salary. I went home. This is suffering.

Never mind the suffering of Israelis who have lost their family members to these jihadists and their mission to kill Jews and destroy the Jewish state. 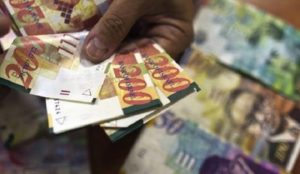 (June 14, 2021 / JNS) The Palestinian Authority has been forced to distribute its stipends to imprisoned terrorists and their families via the post office for a third month, despite recipients complaining that the process is “humiliating,” according to Israeli NGO Palestinian Media Watch.

In May 2020, the head of the Israel Defense Forces in Judea and Samaria signed an amendment exposing Palestinian banks handling these payments to Israel’s anti-terror laws. That led to the closure of 35,000 accounts that had been used to make the monthly payments to imprisoned and released terrorists, as well as to wounded terrorists and the families of dead terrorists—so-called “martyrs,” PMW reported.

The P.A. moved some 4,000 released prisoners onto its payroll as employees but is still struggling to find a way to get the salaries to the others. For the third month in a row, the P.A. has resorted to making the payments through the Post Office, but the policy is unpopular.

“It is the worst thing for the families of the prisoners and martyrs. They are like beggars. I went from 8 a.m., just imagine, I stayed until 3 p.m., and I presented my identity card and did not receive the prisoner’s salary. I went home. This is suffering. I hope through you [P.A. TV] that they will find a solution for this, a designated bank or anything, because there are old people, older than us, and they are suffering. By Allah, this is unbearable, unbearable. … it does not befit the prisoners’ sacrifice that it be like this,” she said….