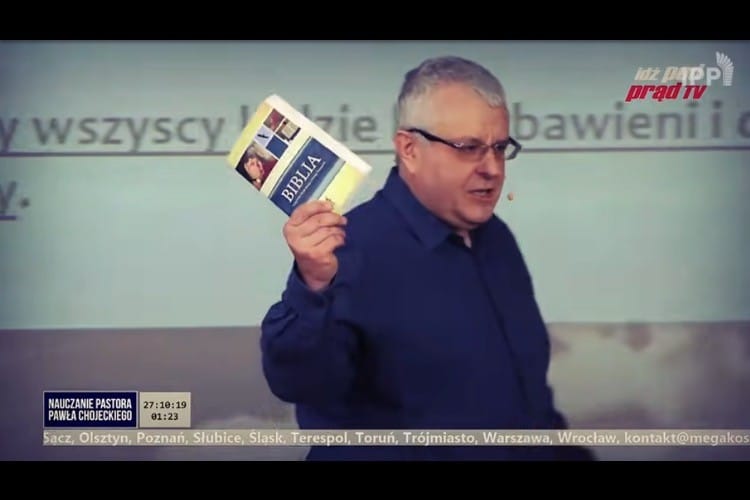 On June 10, the government of Poland, a democratic republic, joined the increasingly despotic regimes of Canada, Australia, New Zealand, and, oh, Communist China, where the persecution of dissenting voices, particularly Christian pastors, is increasingly on the rise.

In an extraordinary move, the Polish state ruled against evangelical pastor Paweł Chojecki, punishing him for exercising his freedom of speech and for publicly criticizing in his sermons and via his online platform “the remnants of communism” in Polish President Andrzej Duda’s current leadership. Chojecki is also accused of attacking Catholic dogma with which he disagrees as a Protestant.

The 58-year-old founder of New Covenant Church and creator and editor-in-chief of Against the Tide TV was convicted in a District Court in Lublin, Poland, on Thursday of “insulting the religious feelings of Catholics, and insulting President Duda.” Judge Andrzej Klimkowski delivered the guilty verdict, concluding Chojecki’s months-long criminal trial that began this past March.

State Prosecutor Katarzyna Urban accused the pastor of insulting President Duda with the terms “ram,” “traitor,” “coward,” and “sleeping agent,” and demanded Chojecki serve up to five years in prison for such “assaults” on the state. Judge Klimkowski ruled in favor of a lesser but still restrictive sentence of eight months of community service and fines of more than 20,000 Polish złoty, the equivalent of roughly $6,000.

During his TV program on Thursday, Chojecki announced plans to appeal the judgment, which he claims is “not legally valid.”

“The greatest harm that this judgment does is that it has already gone out to the public,” exclaimed Chojecki. “I have been humiliated and stigmatized in front of the whole of Poland. The biggest victim of this verdict is the Polish nation, not me. It is our freedom that has been harmed!”

Chojecki has long claimed that the current Polish state bears no resemblance to the once-great Western power of yore, when, in his own words, “religious disputes were separated from patriotism and a common concern for the state’s good.”

“It is the Poland of that period [the 16th century] that is known for its ingesting of religious freedom and tolerance,” he told The New American in May. “Poland was the power of Western civilization in the 16th century, which we know as the Golden Age. It was then that the discoveries of the Reformation about the role of the Bible published in national languages and salvation as a personal decision of faith in Christ reached our freedom-loving nation.”

It is extraordinary that in a free Poland, a pastor would be dragged to the courts over exercising his right to free speech. Yet Chojecki is no stranger to investigation by the Polish authorities; he’s been surveilled for years. A one-time member of the free-market, conservative Real Politics Union — in 2008, Poland’s most libertarian community — which he reportedly left after it adopted pro-Russian rhetoric in the once-communist nation, Chojecki at present exercises his freedoms by tackling controversial social issues via his sermons and online conservative Christian platform. Through this work, he has amassed hundreds of thousands of devoted followers.

On December 31, 2020, an indictment by the District Court in Lublin was issued against the pastor for “insulting the President of the Republic of Poland and inciting hatred on the basis of sectarianism.”

“I have been a Christian since the times of communism,” said Chojecki. “I converted [to Christianity] in 1986…. I was afraid [then] that I would be prosecuted by the Ministry of Public Security or the courts. Thank God this did not happen…. That the Polish State will punish me [now] for my beliefs and words…. I have not experienced something like this in my life. I don’t think any pastor in Poland has been convicted of criticizing the dogmas of another church.”

He further made this controversial statement: “You eat the little Jesus, and He will stay in you for up to 15 minutes. If someone digests faster, for example, if the priest has drunk wine, the digestion is faster, and Jesus lives in a priest for 5 minutes. As for a poor man who only drinks water, his gastric juices dilute it a little, and Jesus stays for 15 minutes.”

“Honestly speaking,” said Chojecki, “I do not know which object of religious worship is offended here and which words are an insult in this description. It is a humorous paraphrase of a fragment of an article from the Catholic portal Deon.pl: ‘So we can say that after consuming Holy Communion, this physical presence of Jesus lasts from 10 to 15 minutes in our bodies because this is how long the process of digesting takes more or less.’”

Even if the judgment is overturned by the court of appeal, the punishment has already made a strong impact on the pastor’s reputation and sent a severe message of what will happen to others who dare share his viewpoints.

“The judge sent a clear signal to those who criticize the Catholic Church and the power of Law and Justice to be very careful about the words, because they will share my fate…. This punishment is intended to make me think about how my dogmas are presented. As I understand it, the point is that I have to think about my Christian beliefs. I wonder how the Poles will react. Is it really the court’s job to shape the dogmas of the faith of Poles?”

At the core of Chojeck’s trial is the issue of freedom of speech. Krzysztof Kilian, professor of ontology and theory of cognition at the University of Zielona Góra, offered these remarks in response to the judge’s ruling:

From what I know about it, in any literature on the subject, “religious feelings” have not been defined. If they have not been defined, it is difficult to talk about what has been offended, or what has not been offended…. There is exactly one definition in our Supreme Court that defines religious feelings as a mental state. The question arises, how can one offend someone else’s mental state?

A second query might be, why is the court taking the time to address the potential personal and religious feelings of Catholics throughout Poland?

Though Chojecki says he was prepared for such a verdict, he admits he has accepted it with great sadness. Quoting Philippians 1:29, “For to you it has been granted for Christ’s sake, not only to believe in Him but also to suffer for His sake,” Chojecki urged his supporters to continue to stand in solidarity with other Christians and to pray for him.

“Thank you very much to all those who have been with me during this time,” said Chojecki to his supporters. “My family, the crew, you as well. After all, the action #SupportPastorChojecki involved a few hundred people, numerous messages. This has been a great experience. I know we’re entering dark times. This is the [government’s] message: keep your trap shut! But the question now is: Are Poles free people?”

Consider learning more about Chojecki’s legacy in the video below and spreading the word about who he is and why he is fighting for principles of freedom, liberty, and justice for all.

It is imperative that we make our voices heard to the Polish government. To easily contact the relevant Polish officials in favor of the dismissal of charges against Pastor Chojecki, visit The John Birch Society’s action alert here.