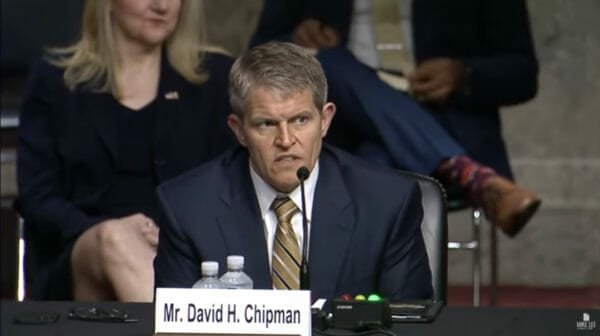 ABOVE: David Chipman’s nomination to head the ATF just attracted some powerful opposition.

U.S.A. –-(AmmoLand.com)- The Washington D.C.-based Conservative Action Project (CAP) came out swinging against the nomination of David Chipman, the former federal agent-turned-gun control advocate, to head the Bureau of Alcohol, Tobacco, Firearms and Explosives, stating “He has a long history of misconstruing key details of how firearms work, and has laid out an aggressive anti-gun ownership platform.”

In a “Memo for the Movement” signed by nearly 100 prominent conservatives and Second Amendment advocates led by former Attorney General Edwin Meese III, the group is telling the U.S. Senate to reject the nomination of gun control extremist David Chipman.”

Gottlieb, who also chairs the grassroots Citizens Committee for the Right to Keep and Bear Arms, told AmmoLand News that this memo, with all the signatures, is “a major development.”

The CAP memorandum pulls no punches.

“A former ATF special agent, Chipman currently serves as a senior policy advisor to a pro-gun control lobbying group. He has a long history of misconstruing key details of how firearms work, and has laid out an aggressive anti-gun ownership platform.”

“Critically, it is unclear whether Chipman fully understands the technical details of firearms and the firearm markets he so eagerly looks to regulate. In 2018, Chipman argued in favor of subjecting all AR-15s and potentially all semi-automatic rifles to regulation under the National Firearms Act – a hugely punitive taxation and regulation measure on the country’s most popular rifle, hugely difficult to implement and police.

“In his recent confirmation hearing, Chipman reasserted his support for mass confiscation of semi-automatic rifles – especially troubling considering that, when asked by Sen. Tom Cotton (R-Ark.) to define a semi-automatic assault rifle, his answer would cover every single modern sporting rifle in America today.

“Though Chipman walked back the claim in his confirmation hearing, he has previously advocated for arresting prospective gun purchasers in gun stores following a failed background check – regardless of whether or not the prospective purchaser has done anything wrong. This is a highly dubious proposal given a Department of Justice report from 2011, which found the “false positive” denial rate for background checks was roughly 95 percent.

“Chipman has also made false claims about both the nature and intent of firearms suppressors, as well as falsely stating in front of Congress that the American gun market is ‘flooded’ with ‘foreign made ARs.’

“David Chipman is a gun control extremist whose views on firearms and the Second Amendment are wildly out of step with constitutional interpretation and widely held social norms. It is clear that Chipman intends to use the position as Director of the ATF to further an aggressive anti-gun agenda, rather than implement the law as written. The Senate must oppose his nomination.”

According to The Hill, Chipman “is facing intense opposition from gun rights groups that are pushing key senators to reject his nomination.”

The Capitol Hill newspaper explained that “pro-gun organizations are protesting his nomination over his support for stricter gun laws and previous work as a policy adviser for Giffords, a gun control group.” Those organizations, the article added, “are now focused on moderates who could swing the outcome, namely Sens. Joe Manchin (D-W.Va.),Lisa Murkowski (R-Alaska), Susan Collins (R-Maine) and Jon Tester (D-Mont.).”

In an article blasting Chipman for his answers during his May hearing before the Senate Judiciary Committee, the National Rifle Association asserted the nominee “worked to obscure the woeful record of the 1994 Clinton ‘assault weapons’ ban.” Chipman, according to NRA, “described the data regarding the ban’s efficacy as ‘mixed.’”

“In truth,” NRA said in the article, “the Clinton semi-auto ban was a failure that even the federal government has acknowledged as ineffective.”

“The evidence is clear,” the article concluded, “banning commonly-owned semi-automatic firearms and their accessories doesn’t work. Chipman and the broader gun control movement’s continued advocacy for a failed policy measure reveals that their political project isn’t motivated by a desire for ‘gun safety,’ reducing violence, or ‘public health,’ but rather a religious passion for civilian disarmament.”

If the Senate rejects Chipman’s nomination, it will be a major defeat for the Biden administration and a setback for Joe Biden’s gun control agenda. Throughout his political career, Biden has never been a friend of the Second Amendment, and his nomination of Chipman is seen by many in the firearms community as a deliberate attempt to pick a fight with gun owners.

In a statement to the media last month, Gottlieb observed, “Out of all the potential candidates to lead the agency, Joe Biden has picked the one individual whose nomination was guaranteed to ignite a political firestorm. At this point, it is fair to question why the president has done this. It looks like the president wants to put the gun prohibition lobby in charge of firearms regulation and enforcement.”

Dave Workman is a senior editor at TheGunMag.com and Liberty Park Press, author of multiple books on the Right to Keep & Bear Arms, and formerly an NRA-certified firearms instructor.