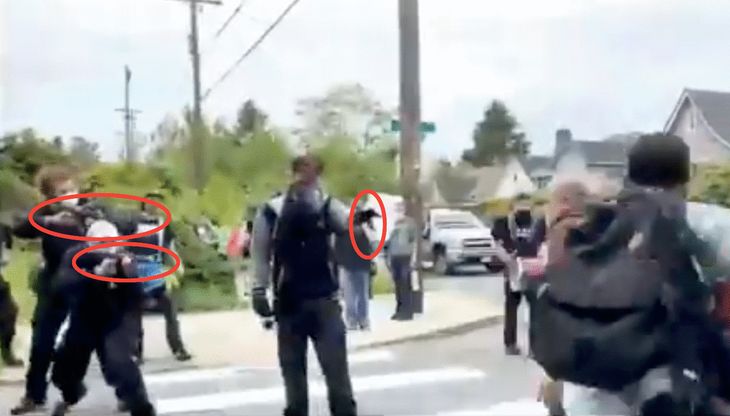 Portland’s revolutionaries from Black Lives Matter and antifa took over a busy street at noon on Wednesday and pulled guns on drivers who dared try to dart past the mob. The groups were holding a rally for a gangland shooter who was killed by police in 2018. That shooting was ruled justified (more below).

The chaotic scene included guns being drawn on white drivers by the multiracial BLM and antifa protesters and one driver drew his own weapon in reply. Someone deployed pepper spray.

Man pulls gun on demonstrators and gets tackled

A driver was reportedly beaten and held against his will, another had his back window destroyed and shots of some sort were fired by the AK-47- and AR-15-wielding terrorists. Multiple sharp sounds were heard followed by the sound of whooshing air after the militants flattened the tires of a car the gun-wielding crowd had forced to stop. The man was “aided” to the sidewalk, as a live-streamer put it (see the video below).

The driver in the video above had his keys, gun, and tools stolen out of his truck, according to Portland police, who finally showed up to take a report in response to an apparently false claim that someone had been hit by one of the cars.

As officers arrived they did not find any pedestrians who claimed to have been struck. The large group had moved away, still walking in nearby streets, some openly carrying firearms. Officers remained in the area searching for anyone who may have been injured and to collect evidence and information.

Additional calls came in from people who had been driving vehicles in the area and who were blocked by the crowd in the street. One person said people in the crowd broke out their vehicle windows, damaged tires, and sprayed them with some kind of irritant near North Interstate Avenue and North Killingsworth Street.

A person in another vehicle blocked by the crowd near North Alberta Street and North Michigan Avenue got into a dispute with people who surrounded him and took a firearm from him, as well as tools and keys.

See another video of the melee below.

A video taken of the event doesn’t tell the whole story, of course, and details are few. But you don’t need to see the video to know that this looks like another act of terrorism on the streets of Portland by Antifa thugs. It also highlights again that BLM and their Antifa “security” are armed, dangerous, and willing to confront people who get in their way. As the Left is fond of saying, “by any means necessary.”

This is the banana republic encouraged by Democrats who have run Portland for decades. While city leaders spend time and money on defunding police and diversity-intersectional-art-tax projects and throwing away millions on its nearly 15th year of “ending homelessness in ten years,” actual law-abiding people are being harmed by the scourge of these thugs.

The marchers took over the street at North Interstate Avenue and North Killingworth Street in North Portland. The marchers demanded “justice” for Portlander Patrick Kimmons, who was killed by police in 2018 after he’d shot two people in a gangland shooting. Police demanded he drop his gun and when he didn’t, they shot him. The shooting was declared justified and officers were cleared of any wrongdoing in the case.

Related: After a Year of Riots, Portland Mayor Ted Wheeler Vows to ‘Take Our City Back from Antifa.’ Color Us Skeptical.

Portland does allow open carry of unloaded weapons and concealed carry. But, as I explain in my podcast series, Portland is attempting to do away with self-defense, one conservative at a time.